About 100 people showed up for a forum on the proposed Southwest light rail transit line that some say would gentrify north Minneapolis and force out low income residents while others say is the economic boon that the area needs.

The forum, held at Summit Academy OIC, 935 Olson Memorial Hwy., was called by Rep. Keith Ellison, whose district will be greatly affected by the proposed line. Ellison is a proponent of the proposed Southwest line, arguing that project construction and business development in north Minneapolis directly related to the line will net north Minneapolis residents one thing – jobs.

“Jobs are increasingly moving to the suburbs and our transit system is not,” said Ellison.

The proposed Southwest line would run west from Minneapolis – through north Minneapolis – to St. Louis Park, Hopkins, Minnetonka and Eden Prairie. The project comes at an estimated cost of nearly $1.67 billion. If approved, planners say the line will be up and running by 2018.

Most in the room at Summit Academy IOC seemed to favor light rail, but the recurring theme was making sure the residents of north Minneapolis – and in particular African-Americans – were not left out in the literal and figurative cold.

“Why is it that communities that give the most of their income end up getting the least,” asked Michael McDowell, transit organizer for Neighborhoods Organizing for Change. “On the Northside we’re the ones with the least (bus) shelters and with no heat.”

It is estimated that residents of low to moderate income spend just about 42 percent of their income on transportation costs.

If the line is approved, it comes with a mandated goal of 32 percent minority involvement in construction and 6 percent female inclusion. But if opponents get their way and are able to block construction Ellison said everybody loses. 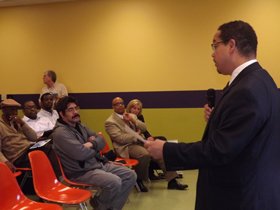 Dist. 7 Metropolitan Council Member Gary Cunningham said the time to act is now because once the project gets rolling it will be too late for African-Americans to get their slice of the pie.

“What are we going to get now that will benefit our community,” asked Cunningham, who is also the husband of Minneapolis mayor Betsy Hodges. “If we wait until it’s built we’re going to get nothing … again. The Southwest line is a good thing. My question is how is it going to work for people of color? The jobs in Eden Prairie we’re not getting hired for now, so what’s going to change? What guarantees are we going to get?”

Metropolitan Council is the agency in charge of transit for the region and responsible for the pending project. An April 9 vote on the line is set for 4 p.m. at Metropolitan Council, 390 N. Robert St., St. Paul. The vote is open to the public and citizens are able to voice support or opposition prior to the vote.