In the last four months, more than 30,000 Somali children under the age of 5 have died during the worst drought in the area in 60 years, according to U.S. government statistics.

“Famine isn’t defined as drought or defined as food access, it’s a definition of children dying,” USAID Administrator Raj Shah told the crowd, made up mostly of people from the University of Minnesota and Somali-American communities. “That number is likely go up significantly if we’re unable to dramatically expand our access to care for vulnerable populations in Somalia.” 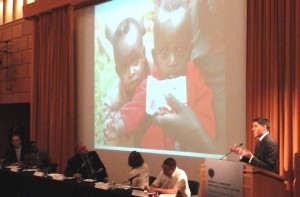 Shah announced another $23 million in grants and aid to provide some famine relief in Somalia and the surrounding region. The U.S. has already spent more than $580 million this year to combat the famine in East Africa, which Rah said accounts for half the funds being donated internationally to the effort.

The drought has also impacted Kenya and Ethiopia. In the entire region, up to 12 million people could be at risk, Shah said.

Much of the effort spearheaded by USAID focuses not just on food convoys, which have been hijacked in Somalia in the past, but on longer-term projects to develop drought-resistant crops and sustainable agriculture, Shah said. Relief efforts have also focused on medical care that can prevent children deaths, like cholera treatment centers.

But despite the urgency of the situation, lawmakers on the panel admitted they could run into roadblocks in attempting to fund more relief in a Congress fixated on budgetary issues. U.S. Rep. Tim Walz (D-Minn.) said the most common constituent call to his office demanded an end to foreign aid. 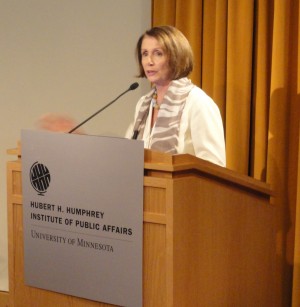 “Some in Congress believe that if people are starving in areas controlled by al-Shabab, that they should not be provided with food assistance,” Pelosi said, referring to the Islamic militant movement that still controls vast stretches of the country. ”Alleviation of poverty, eradication of disease, providing opportunity lessen the fury of despair, which is a recruiting ground for trouble, for violence.”

U.S. Rep. Keith Ellison (D-Minn.) said the United States’ history in the region, including the 1993 killings of 18 American soldiers in Mogadishu, gave some Americans pause about interacting with the region. But the international neglect of Somalia has led to a number of problems, from piracy to the famine to the al-Shabab movement, he said.

“The crisis in the horn [of Africa] and Somalia is all of our business,” Ellison said, calling for constituent pressure for humanitarian aid. “This world of ours can take care of its people but we have to have the political will to make it that way.”

But a lack of financial aid represents just one difficulty in staving off famine in East Africa. Complications in the region have led groups to approach the issue differently than past relief projects, with groups like the American Refugee Committee (ARC) working with the Somali-American community to help get aid to people who need it.

“I want to tell you with absolute certainty that the money you give, the support you put in, is and can be translated into lifesaving programs and it’s happening right now as we sit here,” said Daniel Wordsworth of ARC. 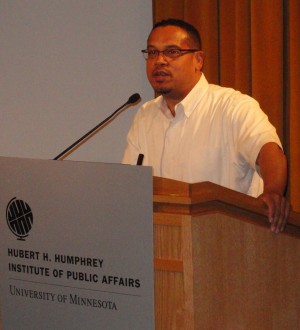 The Somali-American community has been very active in organizing and supporting relief efforts, Wordsworth said.

“We want the Somali-American community, the American-Somali community to know how much we value your contributions to our country, your country, all of our country,” Pelosi told the audience. “I hope you know how deeply concerned we are on this issue that challenges the conscience of all humanity, and we must get the job done.”

Zainab Hassan said the forum was the sort of discussion the community needs to have to help spread peace and stability throughout the region.

“As world citizens we have to be involved in these issues and look at it in a positive and comprehensive way in terms of how do our policies impact other people in the region,” Hassan said. “How can we hold accountable our politicians to do the right thing and to adopt policies that would benefit not only Minnesotans but also internationally?”

Hassan said it didn’t seem that most Minnesotans were aware of what was going on in Somalia, but that programs like ARC’s Neighbors Initiative were changing that.

“A lot of effort is going on in Minnesota to bring together Minnesotan communities regardless of race, culture, countries of origin,” she said.

Ayan Abdinur said most people of Somali origin knew about the famine, but that other issues have sometimes distracted the broader community from learning about famine relief efforts.

“When you hear Somalia, it’s about the pirates, it’s still al-Shabab, there’s so much negative media that we really forget the issue that’s happening right now,” Abdinur said. “Yes, there is a security issue, but there is a bigger issue than al-Shabab and the pirates and anything that’s going on, but I wish that people would step away from that and open their heart to the people who are dying.”

Abdinur said she was proud to see how many people showed up for the forum.

“It was a really great way to show that Somali-Americans, other Americans, that everybody cares about the issues going on in Somalia and that we come together as a community and try to make an effort to help the people in Somalia,” Abdinur said. ”I was really happy, touched, by how the community could come together for one issue outside our country.”