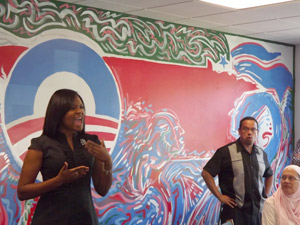 Terra Cole passionately tells attendees at a DFL Unity Breakfast that she is going to fight hard to defeat the proposed voter ID amendment as Rep. Keith Ellison (standing, right) looks on.

Weeks after several hard-fought primary races – one so hotly contested, a recount was needed to determine the victor – one of the DFL deans called for party unity.

US Rep. Keith Ellison held a breakfast at his West Broadway campaign office with several of the candidates in attendance as a show of party unity. All of the candidates pledged to support efforts to defeat two November ballot initiatives – one to force voters to show state-issued identification in order to cast a ballot, and the other to ban gay marriage.

“North Minneapolis may be the most important community to beat this voter ID amendment,” said Ellison. “I asked all the candidates to come together for the good of us all. We need you to come together to get out the vote.”

Ellison said polls show the controversial, proposed voter ID amendment is leading by nine percentage points. If passed, Minnesotans would need to show a valid state-issued ID card or driver’s license in order to vote. According to the bill’s detractors, this would disenfranchise thousands of citizens who do not currently possess such identification.

“If we can get out the vote, we can win,” said Ellison.

In the race for state representative in Senate District 59B, only 20 votes separated the eventual winner, Raymond Dehn from his closest competitor, Terra Cole. The race was also charged by a mailer with an image of a wolf beneath a sheep’s wool that went out to voters accusing candidate Ian Alexander of being a Republican. The mailer was sent by an independent organization that had no known ties to Dehn or Cole. Alexander has admitted that he was once a member of the Republican Party, but changed party affiance prior to his DFL run.

Alexander said he’s put the incident behind him and is ready to fully support Dehn.

“When elections are over, they are over,” said Alexander. “All three of us who ran had the potential to be incredible representatives.”

“All of you (Dehn, Alexander and Cole) could – and I believe will – hold public office,” said Ellison.

Cole said she is ready to do what is needed to defeat the proposed voter ID law.

“If you’re a citizen, you have the right to vote; it’s just that simple,” said Cole.

Cole said party leaders need to do a better job of educating the electorate. “During the re-count, there were 200 people who voted who didn’t vote for anyone in the race for the 59B seat,” said Cole. “What was it that stopped those people from voting? What it tells me is we still have people to reach.”

Dehn said he will be a better representative because of the tough battle he endured in securing the DFL nod.

“My challengers made me work hard. They made me a better candidate,” said Dehn who will face-off against Republican Gary Mazzotta in the Nov. 6 general election. “I know all of you here didn’t vote for me, but I hope you will support me.”

“A lot of people believe this seat is a historically Black seat, and that’s very important – I understand that. Not all who said that were Black either,” said Ellison, who said Dehn will be a servant of civil rights. “It’s not 1971 where there were no people of color in the Legislature. If only Black people stand for racial justice it won’t work as well.” 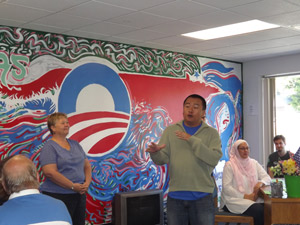 Right: Linda Higgins (standing, left) looks on as her opponent and fellow DFLer, Blong Yang tells an audience that he’s committed to a spirited fight for the Dist. 2 County Commissioner seat.

In addition to the candidates from the 59B race, DFL candidates Linda Higgins, Blong Yang, Don Samuels and Tonia Johnson from the race for Dist. 2 County Commissioner were in attendance at the breakfast. The primary, which was non-partisan, produced two DFL candidates, Higgins and Yang, who will face one another come November. The two stood together, but vowed a spirited fight.

“We are going to get out the vote like never before,” said Yang. “I’m looking forward to this race and to a spirited debate; and I’m going to say it, I want to win.”