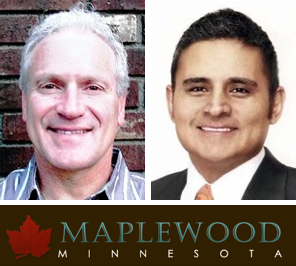 With just under a week until the Maplewood city elections, the quirky politics of the suburb just north of St. Paul have taken some interesting turns. Dueling fliers that some residents describe as “racist and homophobic” and a recording of a 911 call of candidate allegedly threatening a neighbor are among the more noteworthy occurrences.

A flier distributed to some Maplewood residents last week highlighted candidate Jim Llanas’ sexual orientation and ethnic heritage while also targeting Llanas’ support for a human rights commission. In some cases, the flier was attached to campaign literature for mayoral candidate Ken Smart and council candidates Dave Hafner and DelRay Rokke, sparking at least one council member, John Nephew, to connect the flier to their campaigns.

The three candidates deny any involvement, and Rokke has told supporters not to distribute unauthorized fliers on his behalf.

In a message to supporters on his campaign blog, Smart said he didn’t know about the fliers. “I have not seen any hate piece attacking candidate Llanas so I cannot say whether it is a hate piece or if I condone it. I strongly endorse everyone’s First Amendment right to free speech. If it has untruths in it, then I do not condone it.”

Rokke told the Minnesota Independent he hadn’t heard of the fliers; when provided with one, he weighed in. “It is possible that others who support us could have been involved, but there are so many games played in Maplewood politics that most people do not even pay attention to stuff like this,” he said. “I think it is quite a stretch to say that it is racist and homophobic.”

Rokke speculated that Llanas would use the uproar to get more votes. “I guess [Llanas] figures if he can get the vast majority of members of those groups [gays and Hispanics] in a municipal election which will have only about 30 percent of the voters turn-out, he has a good chance to win,” he said. “Now with the allegations of this flier being something making him into a victim, too, he is probably going to get a few more votes.”

Rokke asked his supporters not to participate in any unauthorized fliering. On his campaign blog, he wrote, “If this was done by supporters, [I] would prefer that this not be distributed with, or added to, our brochures as they just create fodder for those who would use it as a reason to hurt the … team.”

Candidate Dave Hafner took a more active approach to denying the fliers this week. His supporters are distributing a new campaign flier (pdf) written by Hafner, which reads, in part:

Neither Dave Hafner (nor Ken Smart or DelRay Rocky) are racist, sexist, or homophobic. I personally don’t care if James Llanis is gay or where he grew up. I lived in Portland, Oregon for two years. I was born and raised in the Twin cities. And I played baseball in Florida long enough. These are three of the top four hotbeds for the gay lifestyle in the United States. I know many gay people and some of them are my friends…

I don’t care if people are white, black, brown, yellow, red, or polka dot green. If there were people that were polka dot green you can bet some of them would be my friends. I don’t know anyone that is actually white, black, red or yellow. I do know many that are “brown” and some that I guess you could call some shade of “yellow.” I also consider some of them to be my friends…

The Hispanic community impresses me as being a group of dedicated, hardworking, and respectful people. And they are predominantly Christian and I like that too.

Hafner told the Minnesota Independent that he had nothing to do with the anti-Llanas flier. “This campaign material was not distributed by my campaign committee. Heck, we don’t even have a campaign committee,” he said by email. “After watching the way I am getting crucified (for doing nothing more than running for the Maplewood city council) I wouldn’t identify myself either if I didn’t have to.”

Llanas told the Minnesota Independent he wants to keep the campaign positive, adding that he believes whoever distributed the fliers doesn’t represent the views of the majority of Maplewood voters.

“These slimy tactics make incorrect assumptions about Maplewood residents,” Llanas wrote on his campaign website. “They assume Maplewood residents are uninformed, comfortable with people who divide our community and tolerant of bigots. The fact is residents are deeply engaged with the affairs of our city and are fed up with this type of political nonsense!”

Hafner’s altercation with a resident

Hafner’s campaign made news locally when a neighbor called 911 during an argument.

Pat Downs, a neighbor of Hafner, used the open comment period at a city council meeting in September to express his concerns about Hafner. “When I told him I objected to him putting signage in my yard earlier, without permission, he demanded his signs back, and called me a thief. My reply was he obviously knew he had put the signage there, and it was mine now. At that point, he went crazy; yelling, screaming and swearing,” said Downs. “He called me a liar and a thief – calling me out of the car to fight, that I was a chicken not to get out. He chased me down the street, swinging his fist and finger at us, and at this point I stopped and I called 911.”

The incident has become a point of contention in Maplewood politics and Hafner went before the council on Oct. 12 to defend himself.

“There’s no proof, no evidence, no qualified witnesses, no police action, nothing. The guy just came down here for four minutes and four seconds and leveled a series of unfounded allegations against me,” Hafner told the council.

“I never got into an argument with Patrick J. Downs. Never. He went out of his way to say I accosted him. The guy also made a false 911 call to the police.”

Downs spoke immediately following Hafner refuting the claims that the altercation never happened. “If people have doubts about what happened, I have the 911 tape and I will put it online.”

In the 911 audio file (mp3) he posted, listeners can hear a voice in the background, identified by Downs as Hafner, shouting that he’s a “liar,” a “thief” and a “son of a bitch.” The shouting was so loud that the 911 operator said, “I cannot hear what you are saying.”

Both acknowledge that they had had previous arguments, and Hafner has called authorities in the past to complain about Downs.

The election for Maplewood will occur on Nov. 3 when voters will vote for mayor and two city council members. Incumbent Kathleen Juenemann won the primary and will be on the ballot as well Llanas, Hafner and Rebecca Cave.

Incumbent Mayor Diana Longrie will face off against council member Will Rossbach in the race for mayor.