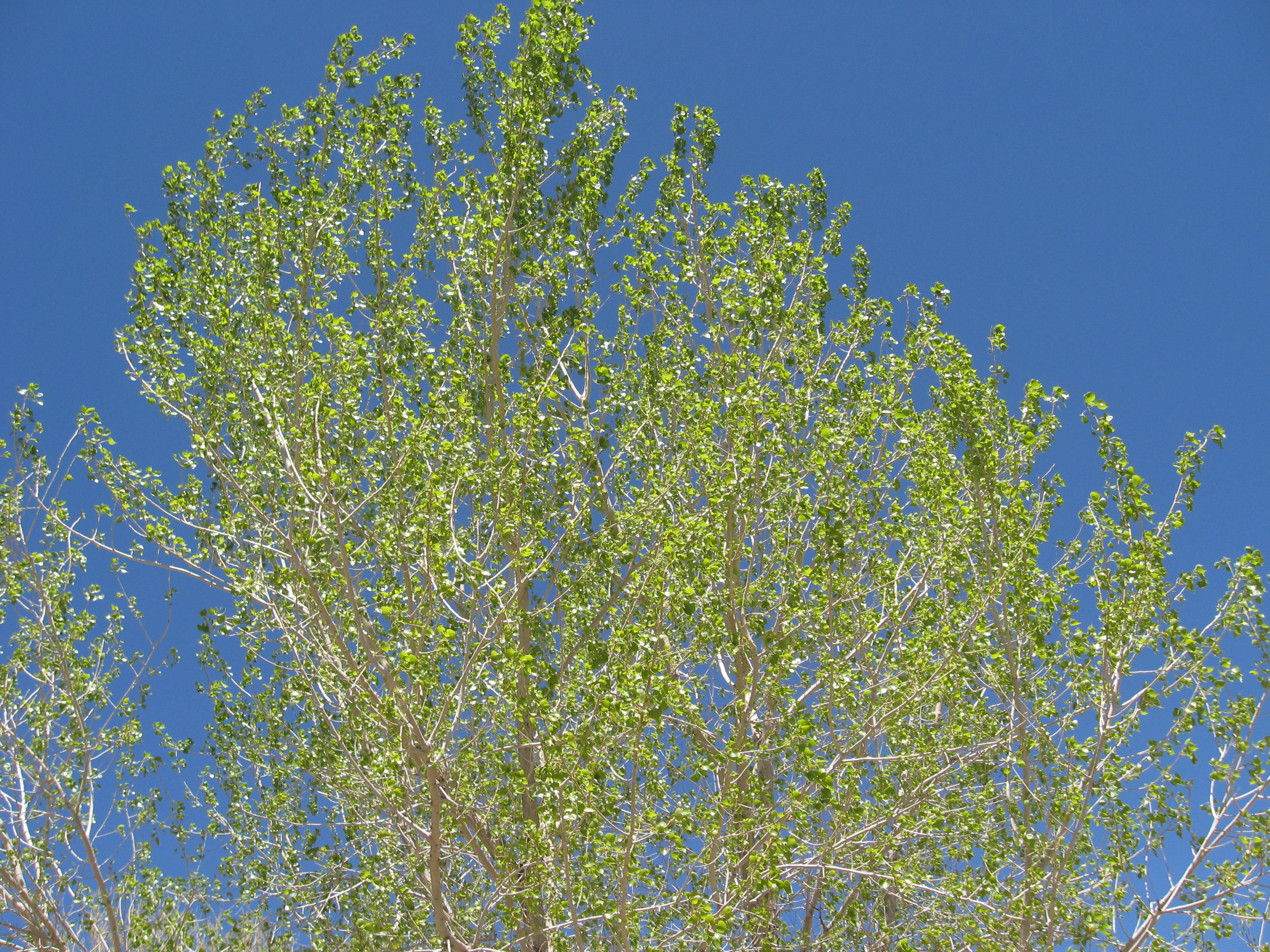 A year ago today I was at a resort in suburban Albuquerque NM. It was a nice spring day, and I walked down to the Rio Grande River and saw this tree which was winning the race to be first to leaf out for 2011.

Today, exactly one year later, I went to my favorite little park in my suburban St. Paul MN community, and took a photo of a typical tree from roughly the same perspective as I did a year ago. 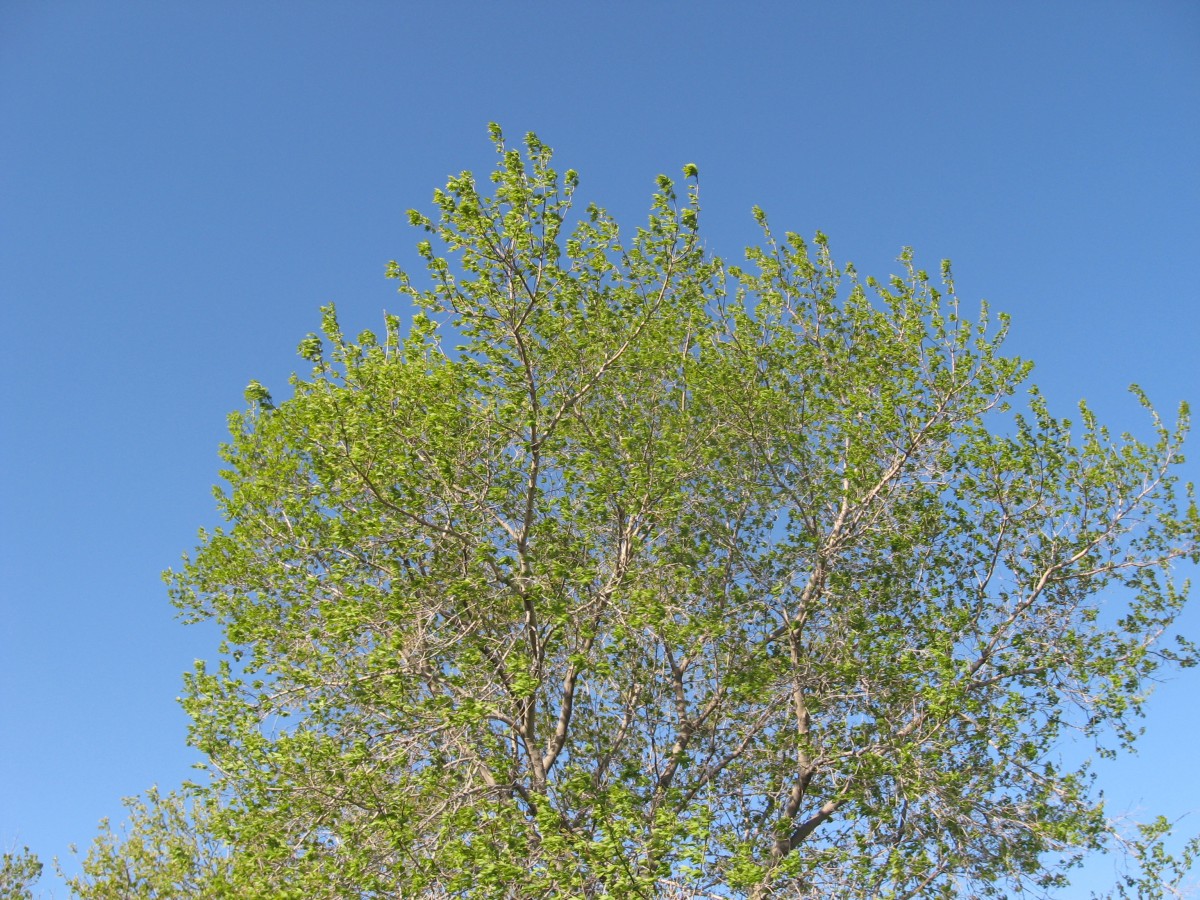 If anything, the Minnesota tree is further along this April 10 than its New Mexico neighbor ten degrees of Latitude (roughly 700 miles) to the south was exactly a year ago. The tree in Woodbury MN seems, among its peers, to be about average in leaf development this April 10; last years New Mexico tree was far ahead of its neighbors, which is why it attracted my attention back then.

What is going on?

I’m not a fool. There are many variables that might possibly lead to the unusual “twinning” of two trees of different species far distant from each other. There are differences in weather, day to day. Etc. Etc. Etc.

For certain, however, March, 2012, was an exceptionally warm month. Odd and often unusually severe weather, from droughts to storms, seem more frequent, and more and more certainly linked to human behavior.

There is something else going and on, and except for those mired in fantasy or with a particular vested interest in maintaining a particular illusion that climate is not changing, and that humanity has nothing to do with it, the debate is over: we humans in the industrialized world have had a great deal to do with the changes we are seeing, and while we don’t know the precise consequences for each of us where we live, there are definitely consequences and they are likely not going to be pleasant.

It was seven years ago this summer that we saw Al Gore make a powerful presentation in St. Paul on what he called the “Inconvenient Truth” of Climate Change. And a year later, we saw his powerful film on the topic. (It can now be easily accessed everywhere.)

Humanity – especially the developed industrialized world – is doing ourselves in and it bodes ill for the future of succeeding generations, perhaps even our own generation.

Check in once in awhile at the website of a new organization called Science Debate.

A while ago I asked a good friend who’s passionate about this subject to recommend a single website he thought would be a good portal for ongoing information. Here’s what he recommended.

But whether these sources, or any one of many others, get engaged and do your part to stop the denial.

As farmers have known forever, weather and climate are bigger than we are.

We are fools to make them even larger factors in our future than they would naturally be.

Within the climate science community, Skeptical Science is regarded as the best up-to-date source for providing a basic understanding of climate science, and for countering misinformation and disinformation on climate science. Al Gore is a good example. Last year after [Minnesota State Senator Ingebrigtsen] and his GOP committee members rejected and ridiculed [St. Thomas University Professor] John Abraham’s testimony that opposed rescinding the state law that limits construction of new coal-fired power plants and limits emissions from power plants, I e-mailed a complaint to Sen. Ingebrigtsen. He replied in part by ridiculing Al Gore; I responded in part by saying there are people who also deny the holocaust. His co-authored bill was based on an ALEC “model bill” and was one of the roll-back bills vetoed by Gov. Dayton.