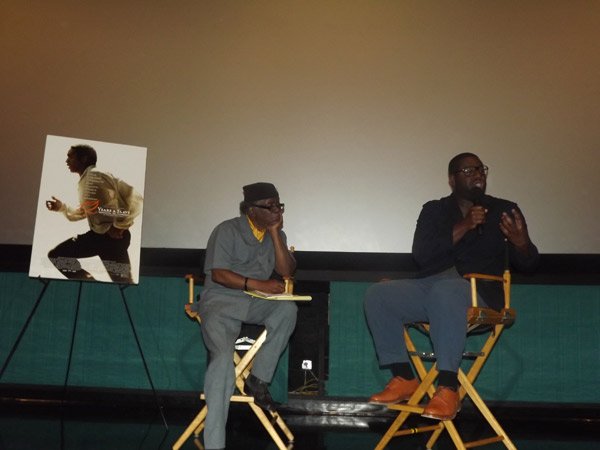 Following a sold out matinee showing of the acclaimed film, “12 Years a Slave” a clearly emotional audience stayed for a nearly hour-long discussion with the film’s director, Steve McQueen.

The film, which is an adaptation of the autobiography of Solomon Northup, a free Northern Black man who was kidnapped and sold into slavery in the South, has been called the most realistic depiction of the brutalities of slavery captured on film. The book, which in recent years has been largely ignored outside of academic circles, has gained new life due to the film and McQueen hopes it will become core reading in schools throughout America and Europe.

The audience, all of whom remained for the discussion following the showing, seemed to agree that the once hidden story needed to be told to the world.

“This is not a passive movie, it’s a call to action,” said McQueen, who is from Great Britain and makes a home in Amsterdam. “What I want is for this book to be a part of national curriculum here in America and in Europe. When I read this book I could not believe I hadn’t heard this story before.” 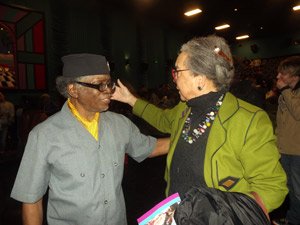 Left: Professor Mahmoud El-Kati and Marian Wright Edelman share an embrace following the screening and discussion of “12 Years a Slave.” McQueen, who also co-produced the movie with several others including Brad Pitt, who also has a role in the film, said being exposed to the book “12 Years a Slave” so late in his life was an injustice.

“I felt stupid for not hearing of the book, but soon I realized no one I knew had read the book before,” said McQueen, who is of African descent. “To me that was amazing.”

In a bit of a disjointed and oftentimes awkward question and answer session between McQueen and historian Prof. Mahmoud El-Kati, McQueen seemed a bit taken aback with some of the questions posed by El-Kati and members of the audience. At times the back and forth between the director and El-Kati bordered on confrontational and when El-Kati questioned McQueen’s usage of the N-word in the film – a word commonly used during slavery – McQueen abruptly thanked the audience and ended the discussion.

The question and answer discussion started with El-Kati praising McQueen for making such a realistic depiction of slavery.

“People who keep up with this know that there’s a huge conspiracy about the truth of slavery,” said El-Kati. “The myth is more powerful than the truth.”

“I think we’re in the beginning of a second Reconstruction,” said civil rights icon and founder of the Children’s Defense Fund, Marian Wright Edelman, who was in town for another event. “Eighty percent of our children can’t read at grade level and we better wake up to what’s happening.”

“12 Years a Slave” debuted in just 19 theaters nationwide but due to extremely positive box office results in those theaters the film is being shown on 1,444 screens. Many critics are predicting Oscar nominations for the film and McQueen.