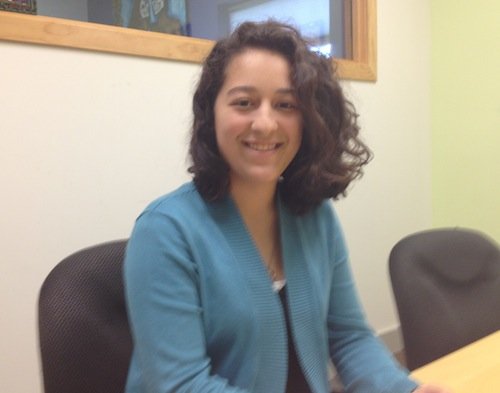 Laura Garcia had never been in an Advanced Placement class before she came to El Colegio Charter School. She had been tracked as an English Learner (EL), and in other schools that meant no AP classes. Like many students at El Colegio, Garcia never quite fit in at the many schools she had attended, due moving many times. At El Colegio, though, she’s finally moved beyond needing to be in the EL program, and is taking college level math.

Born in Indiana, Garcia moved to Mexico to live with her dad when she was seven years old. She stayed there for eight years. When she moved back to Minnesota, she was enrolled in an EL program at Champlin Park High School. Though she spoke English as a young girl, she had forgotten much of it during her years in Mexico. “They didn’t put me in the classes I needed to get my credits,” she said. “They just put me in ESL classes.” She knew she was capable of taking courses in chemistry and math, but the teachers didn’t know her skills.

She had a better experience at Apple Valley High School, where she was able to move up two levels in math, but took a step backward when she moved to Detroit in 11th grade. After taking Algebra 2, the highest level of math the school offered,  she asked if there were honors classes available. She was told she had to stay in the class she had been assigned.

Garcia moved back to Minnesota last December, and lived with her mom in North Minneapolis. Her mom didn’t want her to attend school on the North side, so Garcia ended up enrolling in El Colegio in December.

At El Colegio, she began in the EL program but wasn’t required to take any classes in the program — it just meant she took the EL tests. She also was still able to take advanced courses in math and science. This year, her teachers said she doesn’t need to be in the EL program any more.

El Colegio Executive Director Norma Garcés said the school would never tell a student they couldn’t be in a class because of a language barrier. That’s one of the strengths of the school, she said. El Colegio has a lot of understanding of immigration and language issues.

Since Garcés became executive director of the school, where she’s now in her third year, she has brought in more staff who are Latino. While it’s harder to find teachers, she has increased the number of Latino staff members through positions such as support staff, office staff, youth workers and kitchen workers.

In English classes, students learn academic English, and in Spanish class, they learn academic Spanish. For other classes such as math or science, a bilingual approach can help students who sometimes struggle with English. Even if they are not Latino, most of the teachers at El Colegio are bilingual, so that if a student doesn’t understand a concept, it can be taught in Spanish as well as in English.

While the school’s 70-student population is mostly Latino, some students are African American, American Indian, and white. Currently, Garcés said, there are no Asian students.

Senior Maria Nava said there’s no racism amongst the students at school, although she wishes it was more diverse. “When people hear about the school, they don’t now it’s open to anybody,” she said. “I wish there was more Native Americans, African Americans. I think it would be cool to have more students.”

Still, Nava likes El Colegio’s culturally centered approach, which includes hosting programs such as the Dia de los Muertos (Day of the Dead) celebration and other cultural events at the school.

Nava’s fellow student Laura Garcia, however, doesn’t participate in all of the school’s celebrations, particularly Dia de los Muertos. The school views the celebration as a cultural celebration, rather than a religious one, but Garcia, as a Pentecostal, feels uncomfortable with it. “It’s because of my beliefs,” she said. “I do not believe the dead come back and eat what you put on the altar.”

Garcés said the art program is not as strong as it once was, or as strong as they want it to be. She says she hopes to combine it with the STEM program. Last year, students made their own ink in chemistry class, which they used to create works of art. The practice also has indigenous roots from the Aztec and in Mexico. (STEM is an acronym for Science, Technology, Engineering and Mathematics.)

The program is in part supported by a partnership with La Raza, a student group from the University of Minnesota, which brings in about 20 Latino volunteers.

The after-school program provides a Latino cultural component, but there’s also an emphasis on learning mainstream culture, according to Garcés, as well as learning about multiple traditions, such as in a class called Exotic Foods, which teaches about cuisines from around the world. “It’s not about keeping you Mexican and not touching anything else,” Garcés said.