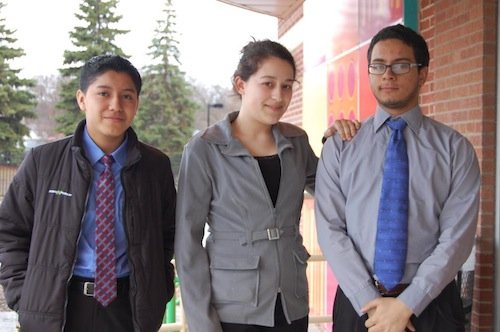 Norma Garcés, now in her third year as director of El Colegio charter school,  has been working hard to turn the school’s struggling reputation around. Known as an alternative to alternative schools, the school struggled for years with a reputation for gang involvement, and with high enrollment but low attendance.

Garcés has taken steps since starting her position to add a more formal structure. For example, she introduced bells to mark the start of classes, and stopped the practice of calling teacher by their first names. “They are not your buddies,” Garcés remembers saying. “That was a big change. I’m not Norma. I’m Miss Garcés. I’m the director. We’re not equal.

“I started teaching the system,” Garcés said. “9 out of 10 kids did not understand the high school system.”

She said the community had spoken out about the changes they wanted to happen, and one of the things they said was that if El Colegio was a Latino school, they wanted a Latino Director.

First of two stories — see El Colegio: A place to belong, a place to succeed

Ana Vasquez, a science teacher at the school, was relieved when Garcés changed the policy of using teachers’ first names. “The fact I’m Latina, raised in Latin America, that level of respect matters,” Vasquez said. Prior to the change, it was easy for students to cross the boundary of teacher and student. Particularly because Vasquez looks young, the use of the last name shows respect for her. “it creates a level of trust,” she said.

There was resistance by some of the students, but Vasquez said she could softly correct them during the transition.

Garcés knows the students face many challenges. “The achievement gap is clear,” she said, and a look at the school’s test scores shows a lot of work to be done. The Minnesota Department of Education’s website doesn’t show the school’s math proficiency scores since 2011, when it was at 0 percent. The reason the math proficiency scores don’t show up is that there have been fewer than 10 students taking the test each year since then, according to Josh Collins, MDE’s Communications Director. El Colegio’s reading proficiency was zero percent in 2013 (with 17 students taking the test), down from 11 percent in 2011 and 9 percent in 2012.

Garcés said El Colegio isn’t a place for kids that would do well in other schools. “If you are in AP classes, have a good GPA, know your counselor, don’t come to El Colegio,” she said.

At the same time, El Colegio students are opinionated and resilient, according to Garcés. “They didn’t settle for the crumbs given to them in another school,” she said.  El Colegio offers a place for students who don’t fit in at other schools. “The school creates a sense of belonging,” Garcés said.

Garcés points to other improvements, such as having no fights in the school, last year, and an increase in college-level courses such as Math Modeling, a College in the Schools class. Five students at El Colegio took PSEO classes last spring, and Garcés said the school has a partnership with MCTC through which a ninth grade student could plan on getting 30 college credits by high school graduation.

Laura Garcia, a student who has taken advantage of the school’s college-level opportunities, also participated in Minneapolis’s Step-Up program through El Colegio. In this program, she worked as an intern for a construction company. She also did a teen architecture program, and ended up winning a contest at the Weisman Art Museum for an architecture project.

Garcés makes a point of emphasizing college as a goal for El Colegio students, through programs such as hosting a College Night, and in their partnership with La Raza, which gives the high school students the opportunity to interact with college students.