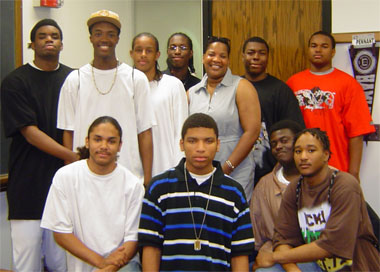 Tracy Batsell (top row, fifth from left) with a group of North High student-athletes who participate in the Educational Mentoring program she directs.

Over the last few months, the ongoing stereotypes and statistics of educational failure and violence among African American youth have been reinforced with the headlines of murders in Minneapolis’ inner city neighborhoods, especially the killings on the city’s North Side.

However, a program based on the North Side, Educational Mentoring, has African American students actively engaged in maintaining high academic standards and planning for a productive future.

Educational Mentoring started three years ago as volunteer work at North High School done by its director, Tracy Batsell, whose son is former North High basketball standout Ricky Batsell-Parks. “My son has been playing sports since he was [about] five, so as you go on to junior high and high school, [sports] becomes important because it can be a vehicle that gets you into and through college,” Batsell says.

“I saw many kids go off to college and [then] come back home. It became an interest in me as to why,” Batsell continues. “And the why was for many reasons: support, lack of information. They were often sent off to schools where they were not knowledgeable about what they were getting into. Once they got there, they didn’t have the support. So I started my program to help get those kids the support that they needed to stay in college and graduate.”

“My program assists student athletes with high school…and then we also follow them through college…literally get them into college and stay with them until they graduate.

“So we talk to them realistically about the options that are available to them… Because everybody I work with is going to the NBA or the NFL!” Batsell jokes.

The program was created specifically for student-athletes but now includes students who don’t participate in sports as well. In the 2005-06 academic year, it served about 150 students of all grades at North High. “I also have, at this time, five students at the University of Minnesota and 15 students at other institutions [who] have just finished up their freshman or sophomore year in college,” says Batsell.

Program activities that serve Educational Mentoring goals include tutoring from teachers and peers, ACT and SAT preparation, and class discussion with mentors. The program also works in partnership with Achieve! Minneapolis’ Career and College Center at North High.

Arnise Roberson, coordinator for the Career and College Center, explained the link with Batsell and Educational Mentoring: “A lot of times the students that I’ve worked with so far, they started with Tracy and end up with me for additional follow-up.” Roberson works with students specifically on college entry preparation, including filling out financial aid and admission forms.

In talking to some of the program’s participants, it’s clear that Educational Mentoring lets them know — and embrace — how hard they have to work to be a student-athlete. Tim Weaver, a junior who plays basketball, says when asked if he ever gets to have fun outside his scholar-academic schedule, “We still party; it’s just that we got that extra person that we’re giving piggyback rides to. [Miss Tracy’s] always on our back, [saying] ‘Okay, you can do this, you can do that, but you know what? This ACT [is] coming up; you need to do this first before you even do that.’

Carlius Hodges, another student who plays both football and basketball, when asked “How do you play both and pass class?” responds that “It’s easy when we got Miss Tracy on our backs. She’s gonna help, and if you are failing, or low GPA…she’s going to do all she can, with all her might, to try to keep you up with a nice GPA and make sure you’re on the right path. Especially being young black males, the statistics aren’t that high, but she’s just trying to push us to the next level.”

Fowell Center for Urban Initiatives affiliated itself with Educational Mentoring in April 2005 and expanded the program to Patrick Henry High School.

“We picked it up as an unfunded program and paid [Tracy Batsell’s] bills,” says executive director Roberta Englund. Even though Fowell Center can no longer afford to continue funding the program (“We’re still looking for funding,” Englund states), Tracy Batsell will continue to do Educational Mentoring at North High as a volunteer, just as she did when she founded the program.

For more information about Educational Mentoring, or to volunteer or offer financial support, call Fowell Center for Urban Initiatives at 612-521-2100, or “click here to send an email”:mailto:info@folwell.org.