The Saint Paul Regional Labor Federation joined local teachers unions in hosting a community forum Sept. 27 in North Branch to discuss education funding in Minnesota, with a focus on the inequalities and challenges it creates for several school districts in Chisago County. Voters in 113 Minnesota school districts – about one-third of the state’s total – will find requests for operating levies on the Nov. 8 ballot, according to the Minnesota School Boards Association.

Levies provide school districts with property-tax revenue to augment the per-pupil funding they receive from the state.

State lawmakers, hampered in recent years by massive budget shortfalls, have failed to boost the per-pupil formula so that it keeps pace with inflation, leaving schools to seek support from local property taxpayers in covering the rising costs of energy and supplies.

North Branch is one of the few districts that do not. The district’s voters have rejected levy requests seven times. An eighth request will be on the Nov. 8 ballot. 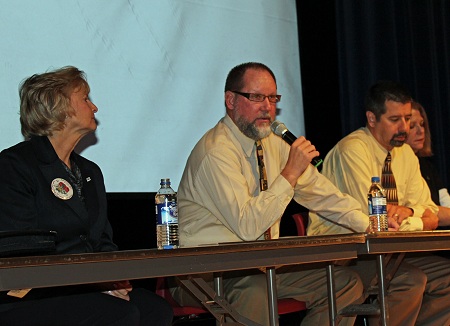 At the community forum, North Branch Schools Superintendant Deb Henton said the district has cut $14 million from its budget over the past nine years, slashing elective course offerings and activities, laying off 89 employees and shifting to a four-day school week.

“The world runs on a five-day week, but we’re on a four-day week here in North Branch,” Henton said. “We’re operating with a skeleton crew.”

The situation in North Branch is exhibit A for an increasing number of education advocates who argue the State of Minnesota is not living up to its constitutional obligation to “establish a general and uniform system” of education.

In fact, a coalition of districts like North Branch, banded together as Schools for Equity in Education, is exploring a potential lawsuit against the state. The schools argue the current funding system creates “haves and have-nots” among Minnesota’s school districts.

Districts with industrial development and high property wealth – places like Edina and Orono – have little trouble passing levies to support their schools, as the financial burden is spread across a broad tax base, softening the impact on homeowners.

With limited industrial development in the district – and a rash of foreclosures in recent years – North Branch homeowners would bear the brunt of the proposed school levy.

What’s more, because their tax dollars are not being “matched” by a strong industrial tax base, homeowners in property-poor districts like North Branch are getting less bang for their buck, according to SEE.

While property-rich districts “can ask for the maximum levy of $1,500 per pupil, places like North Branch have to ask for less,” said Deb Griffiths, SEE’s director of communications and community outreach.

The levy request before North Branch voters this fall seeks to raise about $1.5 million over the next three years – or $350 per pupil – to soften the impact of cuts needed to address a projected budget deficit of $2.5 million.

If the levy fails, where will a district already operating on a four-day school week look to cut next? North Branch teachers anticipate staff cuts, larger class sizes and even fewer academic and extra-curricular offerings for students.

Not surprisingly, morale among the district’s teachers – and students – is low, said Mark Savage, a middle school physical education teacher and member of the North Branch Education Association.

“Our morale is quite low, but we handle it very well,” Savage said at the Sept. 27 forum. “When we get in that building and the bell rings, I’m spot on.

Even in districts that are able to pass an operating levy, like the neighboring Chisago Lakes School District, administrators say state funding has not kept pace with their rising costs – or the costs of meeting additional state and federal mandates, like special education and the reporting measures included in the No Child Left Behind law.

“The math is really easy from where I sit,” Chisago Lakes Superintendent Mike McLoughlin said. “We are being asked to do more and more with less and less.

“I do not believe we are really taking care of what was once the Minnesota educational miracle here in our state, and I do not know why.”

“Our legislators say education is the engine that drives our state’s prosperity,” SEE’s Griffiths said. “That engine is really getting a little rusty.”