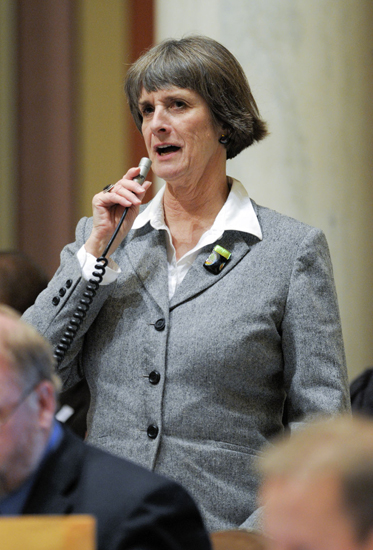 At age eight, Rep. Mindy Greiling (DFL-Roseville) knew she wanted to become a teacher. Years later, her accomplishments would include earning both a bachelor’s and master’s degrees in education, teaching in St. Paul public schools, and later being elected to the Roseville Area School Board and finally the Minnesota House of Representatives.

Now, after 10 terms in the Legislature, she’s stepping down.

“I’ve spent a quarter of a century with elections every other year. I want to quit while I’m still enjoying it,” Greiling said.

During her nearly 20 years of serving the people in the northern St. Paul area, Greiling has fought for school funding and reform.

“She’s a good friend and her retirement is a loss for the entire state of Minnesota. She will be missed by members of both parties,” said Rep. Pat Garofalo (R-Farmington), chairman of the House Education Finance Committee.

The first bill Greiling introduced would have provided financial incentives to districts to hire female superintendants. “So often there’s a woman in the pool, but she doesn’t get picked,” she explained. The bill didn’t pass, but it was the start of a career in the House and illustrated her concern for education.

Greiling cites the New Minnesota Miracle, an education finance bill she championed, as both her biggest accomplishment and greatest disappointment. The bill would have provided increased funding for schools around the state. At the same time, it required districts to put accountability measures into place, with the goal of helping struggling students. Despite Greiling’s effort, the bill ultimately did not pass.

Regardless, Greiling is proud. “That was the great honor of my life, to fight for kids,” she said.

Greiling’s son was diagnosed with schizophrenia at age 21, and that was when she resolved to make mental health her priority as well. She started a mental health caucus in the Legislature. That year, funding for programs to help those who suffer from mental illness in Minnesota increased the most it has ever been in a single session. Greiling is dismayed that funding is being “chipped away,” but continues to work for this cause.

“That’s one of the privileges of being here [in the House]. If something happens to you or anyone you know or constituents, you can bring it here and have the satisfaction of making it better,” she said.

Greiling wasn’t always the seasoned representative she is today. When she first entered office, she admits it took her some time to become comfortable. “I was very naïve when I came here, so I didn’t take to it,” she said. Over time, those feelings changed.

“There are so many good-hearted, gregarious people here. … Everyone here tends to be making less money than they would somewhere else. They choose to be here because they care about what we do here,” she said.

Greiling has learned how important relationships with those colleagues are. That’s advice she wants to pass to her successor: “Your word is gold here and your actions should affect how you’ll be successful. Be a person of integrity and maintain relationships.”

Before her successor steps in, Greiling still has nearly a year before her final term is complete. During that time, she hopes that the Legislature will not instate any controversial constitutional amendments or spend money on a new stadium, instead saving those funds for education and health care. From there, she hopes they will work on a bipartisan level to create positive change for Minnesota.

“First do no harm, but then let’s try and do some good,” she said.

The increase in partisanship is perhaps the biggest change Greiling has seen since she first joined the House. Over time, she said, “The caucuses have gotten into armed camps.” She feels that this year could be different.

“Everyone says that, every party, every Legislature, but we could really do it this year,” she said.

Greiling has not decided what she will do next, but she has options. She has already started receiving job offers since her announcement that she would not seek re-election. But she’s not in any hurry to decide.

“Especially when you’re in the last quarter of your life, you don’t want to pick something unless you’re passionate about it,” she said.