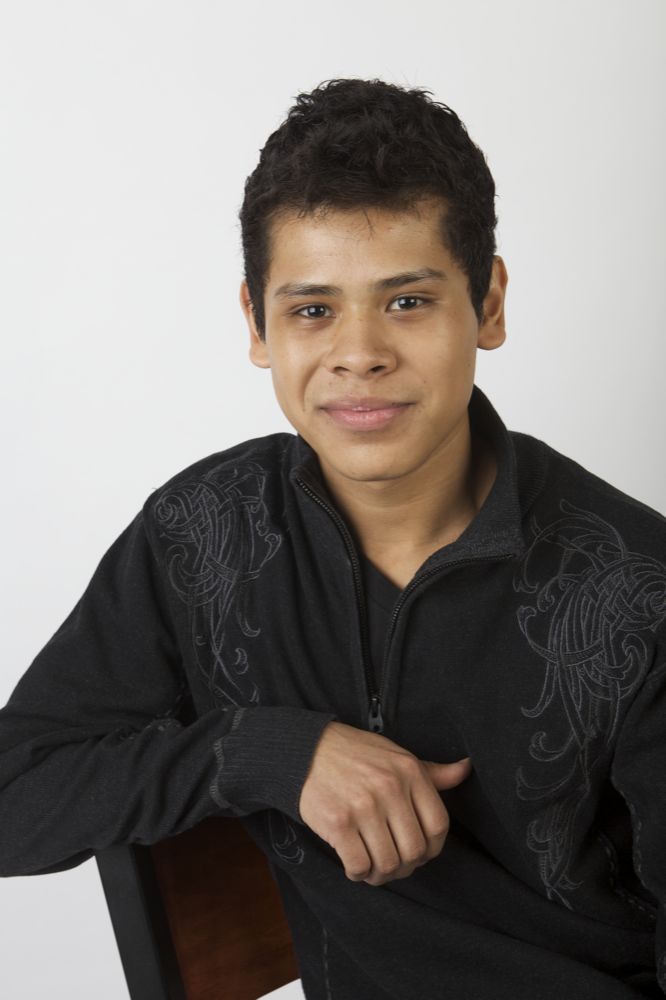 Roosevelt High School senior and National Honor Society President Eduardo Sanchez Beltran is a commanding presence as he walks into our interview with a laptop bag strapped over his shoulder, a beaming smile, a firm handshake and polite demeanor. He shares his experience of surviving two violent crimes and Post Traumatic Stress Disorder (PTSD), his dream of being a journalist, and his love of visual and performing arts. Eduardo has overcome the unthinkable in his short life, but his story is as much a story of beating the odds of poverty and violence as it is a story of courage and activism.

Children’s Defense Fund-Minnesota will recognize Eduardo Sanchez Beltran, Lashay Thompson, Raymond Perez and Anne Sinner as the 2012 Beat the Odds winners on March 16. This is the 20th annual Beat the Odds celebration.

When he was six years old, Eduardo immigrated to Minneapolis from Mexico with his family. His parents struggled to make ends meet by each working two jobs, finding safe and affordable housing (all four shared a bed in a one room rental), and adjusting to the culture. Eduardo recalls being teased because of his accent and the color of his skin. Life in America had started on a difficult foot.

At the age of 11, on a sunny, balmy July Sunday evening, Eduardo was listening to music in his dad’s truck. Suddenly the vibration of bullets, shattered glass, smoke, and his own screams filled the truck. Eduardo was caught in the smoky crossfire of a gang shootout. Luckily he escaped without serious physical harm but the mental scars of the event were slower to heal. Eduardo trudged forward, plagued by sadness, nightmares, and fear with every step in his neighborhood. Every sound, smell, color, and image of that day was a part of his everyday existence. When Eduardo was diagnosed with PTSD, he finally had a name for what he was feeling.

Three years later Eduardo stood frozen on a winter day for what seemed like eternity, while he was robbed at gunpoint by a group of eight gang members in his neighborhood. Again, he escaped with no serious injuries but Eduardo says his “already full cup of water had overflowed”. The events triggered symptoms of his PTSD and again his mind was a prisoner to the violence.

With encouragement from teachers and mentors he sought the help of therapist, learned techniques to better deal with the memories of his past, and was determined not to be a victim of his circumstances. He found a new love for theatre and the arts. Whether on the brightly lit stage at Pillsbury House Theatre, in a school theatre production, or creating a work of art, Eduardo was beginning to feel free from the fear. With the help of College Possible, Eduardo was beginning to see his love of theatre and storytelling become a part of his future. He has his eyes set on the windy city of Chicago and hopes to attend DePaul, Loyola, or Benedictine University. He hopes to somehow combine his love of theatre and broadcast journalism into a career.

Eduardo talks about his struggles with PTSD with great courage and openness. It’s a part of his story he doesn’t have to share, but he does in hopes that others feeling trapped by their own memories or struggles will come forward and seek the help they need. He is excited for the possibility in his future but admits he does worry about navigating the college maze, “like choosing the right classes and major”. He has advice beyond his years to give to anyone in a struggle: “I like to use the analogy that life is like a bike, sometimes you go up hills, down hills, sometimes you fall off, but you always can get back on and keep going”. Indeed Eduardo has kept riding his own bicycle of life; he has beaten the odds while spreading a message of hope.