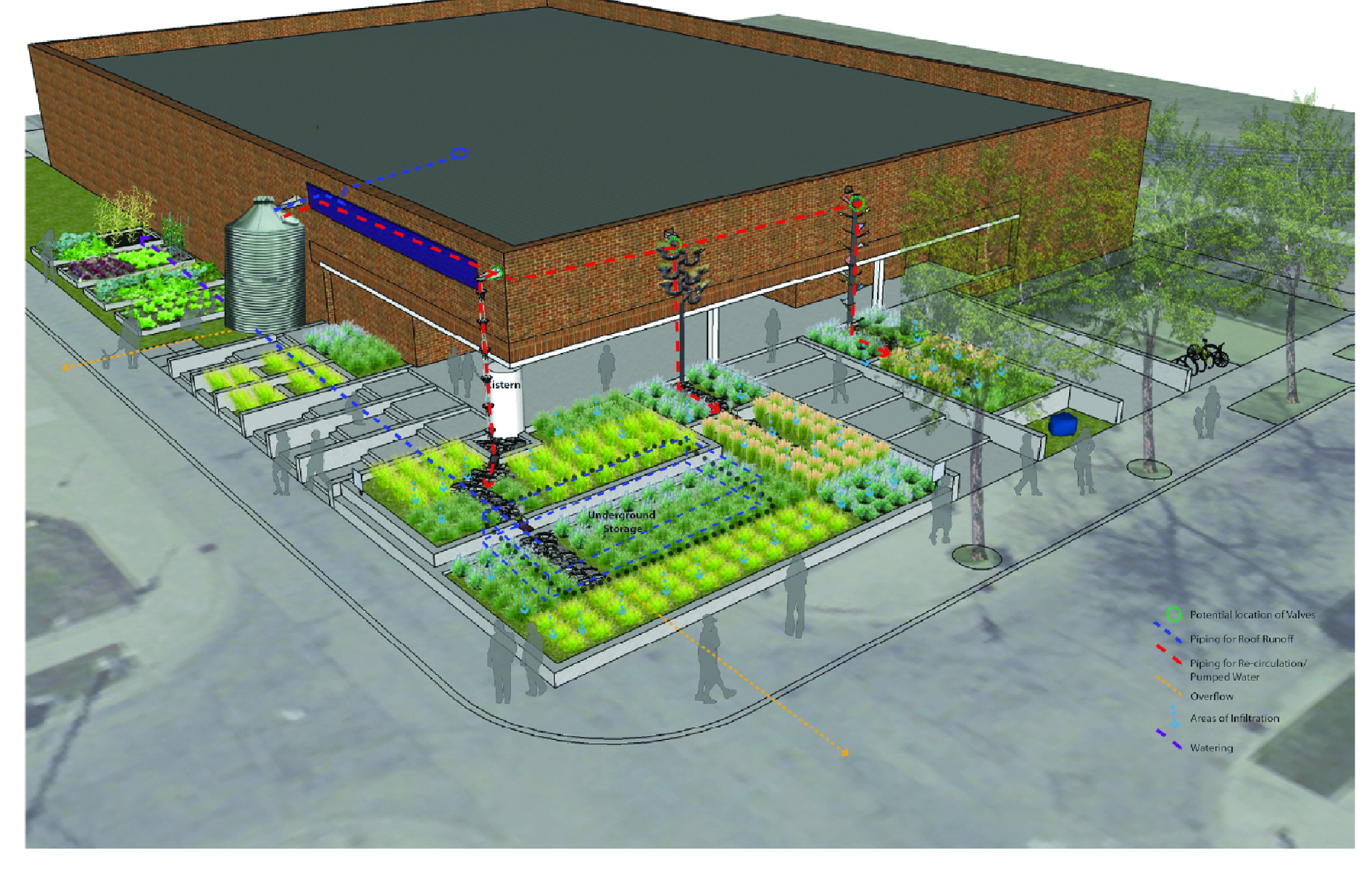 “Off the chain” comes to mind…a rain chain, that is, part of the new “green campus” features planned for Edison High School, 22nd Avenue and Monroe Street NE, which will be breaking ground as soon as school lets out.

To the west of where about a decade ago rushing 100-year-flood water threatened to collapse the building, by fall 2013 you’ll see “10-12 BMPs” (examples of best management practices) including artistic outlets for controllable pumped rainwater. “We’re making water more visible, bringing it out and celebrating it,” said consultant landscape architect John Slack of Stantec, an international firm with an office in Saint Paul. He noted Seattle and Portland have artistic downspouts on some of their buildings.

In this part of the makeover, the Edison gymnasium roof water is captured in an above-ground cistern and a below-ground holding tank. It’s then used onsite to water increased plantings as well as to circulate through some kind of art on special occasions. A lot of the current impervious surfaces around the gym, described as “overgrown and poorly maintained,” will go away, including one of three sets of stairs along 22nd Avenue.

A couple of audience members at the Holland Neighborhood Improvement Association meeting Feb. 14, where the draft concepts were explained, asked if there could be any kind of student gathering space, or was that deliberately being discouraged. The answer: The plan isn’t final, get involved and see what can be done. The current plan tried to respond to neighbors’ expressed desire to see more planted areas.

The parking lot north of Edison would also be modified to manage storm water onsite, by taking up a six- to seven-foot strip of asphalt in the middle to plant trees in a new kind of trench filled mostly with layers of different sized stones and some dirt. This would not affect the number of parking spaces.

Slack explained that some tree roots naturally die off and create nutrients for new root growth; once a tree is established it’s the access to air and water that are most important, not nutrients from soil. He said he first used something similar to this new method along Washington Avenue between 5th and 10th avenues in the North Loop. “There was eight feet of growth in the first year. They’ve been using this [method] for 30 years in Sweden.”

The lot design includes pervious pavers under several parking spaces at the lowest end and a partially vacated alley, with low-maintenance-requiring plantings along edges and in a rain garden where part of the alley is now. There would be no design features at the north end of the parking lot, which is now very close to the neighboring residence.

Tree species haven’t been chosen. Slack said the Minneapolis Park Board’s Forestry department and the Minneapolis Tree Advisory Commission (of which he’s a member) might test different varieties of trees on this site.

Resident Kurt Nowacki said “the change from 10 years ago to now is amazing” with the creation of the basin and artistic improvements at Jackson Square Park. “The neighbors have been saying they wish the teachers would stop parking on the sidewalks. And they complain about the alley,” this design should address those concerns.

To stay on schedule and get the parking lot done in time for Edison’s traditional August barbeque, planning refinements with stakeholders will take place in weekly meetings starting soon. First Ward Council Member Kevin Reich said the beauty of how this plan developed is it was “front loaded” by involving all the key institutions plus engaging the community. He thanked the Holland group for two years of what might have seemed to be exercise, but that was “pre-work that really meant something.”

So, back up—how did it start? You may remember hoopla a couple years ago around Edison being named one of the nation’s leading green community schools, capturing attention of Jayni and Chevy Chase who brought her foundation’s resources to fund a staff position and various initiatives. When Chase’s non-profit had some internal issues, Reich said, “we had to collapse the program.” But the “goal was to support the youth council and do some of their ideas.”

A Mississippi Watershed Management Organization (MWMO) grant was applied for and received, an engineering firm did a study and tool kit of best practices for the park, school, and surrounding homes and streets. Of about a dozen projects suggested, two came clear—focusing on the school to reinvigorate the students’ Green Council (six to twelve students attend regularly) and work on the gym and parking lot stormwater management.

Reich has said he was out walking his dog one day and saw maintenance trucks from four different jurisdictions arrive to cut grass…this made him think, “Wouldn’t it be better to coordinate?”

He said most of the cross-jurisdictional issues have been solved. One remaining is “city Public Works staff will have to work with school maintenance. They (Public Works) don’t like to mess with the grid. But we’ve been doing that here in the name of storm water management since 2002.” It’ll be settled at the Planning and Zoning committee level. It will be about a month before plan refinement meetings can start. For information, call Reich’s office at 612-673-2201.

The gym project will likely not be completed by the August barbeque, but it will get underway on the same schedule.

“This will clean up an area that’s been on the blighted side, ‘scroungy,’ I think is the technical term. We’re looking for a re-boot and something that will sustain itself without much maintenance,” Reich told the Holland group.

Student Oshana Reich presented what Edison students have been doing, including a trip to Denver to learn “really cool things” about best management practices. They’ve advocated biking to school by planning an official bike and walk day. (There were several comments about needing to add bike racks into the gym and parking lot plans.)

Student Alyson Westerhaus gave a glossary of terms used in talking about managing storm water. She pointed out that the MWMO is one of three dozen watershed management organizations in the metro area.

After the meeting, Reich commented that the students have been part of the design throughout. “The ideas around the alley came from them. They’ve been very visible and have pushed the envelope on art and the cool factor.”

Slack said he’s excited that the students are so involved. His company occasionally funds research projects; he said he has made Stantec a proposal to purchase equipment for long-term monitoring which the students would carry out.

The parking lot design (below), narrowed down from several test concepts, was designed to handle all water on site for a 4.1 inch rain event. It is designed to allow excess water to go into the storm sewer. The Edison Gym project was designed to handle an over-five-inch rain event. It was noted that, on average, rains are becoming more frequent and heavier, though 1.25 inches is considered normal. “Rain event” means the amount that falls continuously or within 24 hours, whichever is greater. 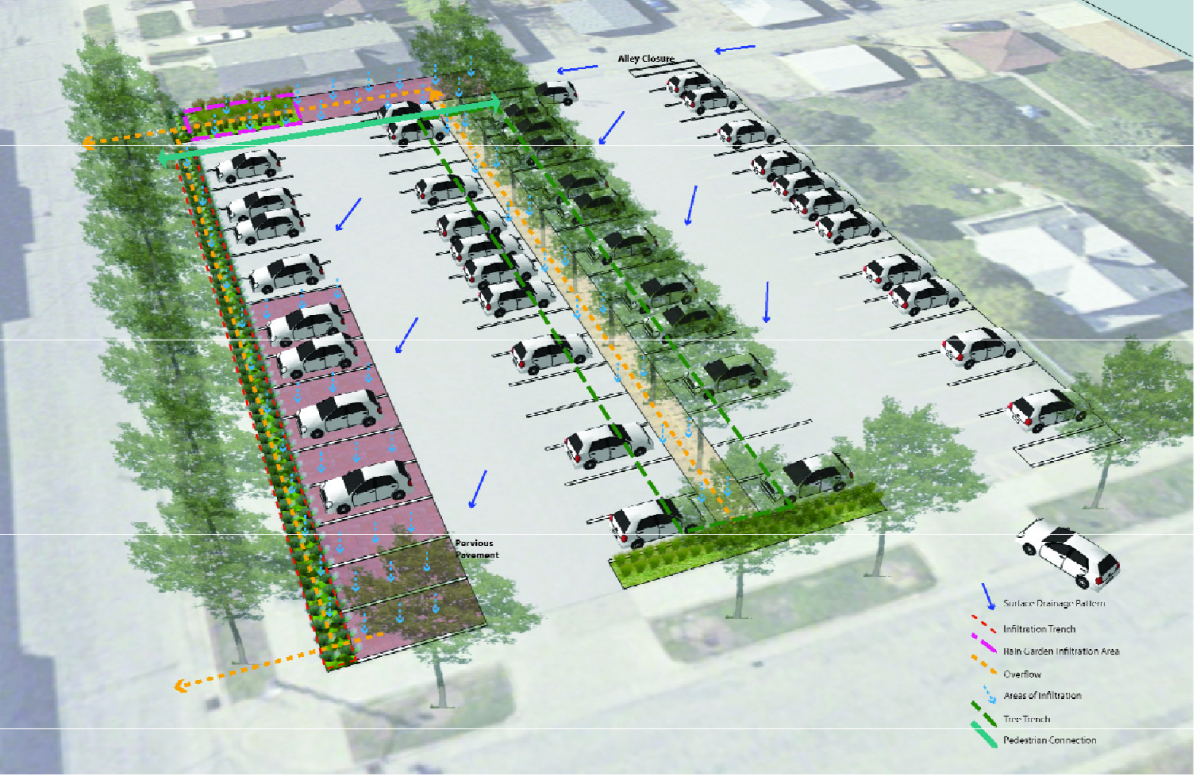