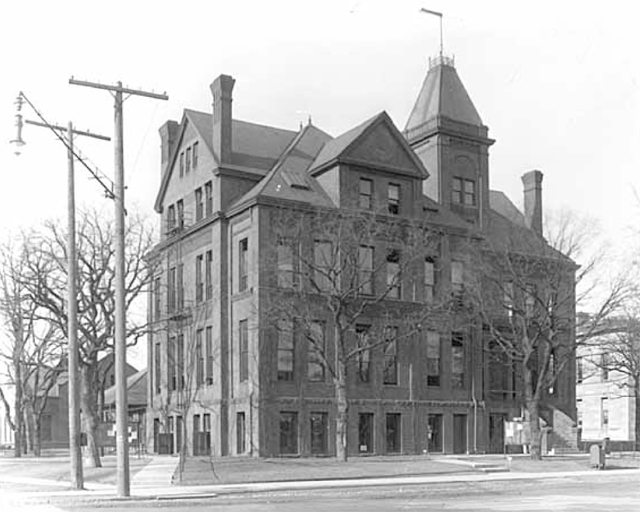 At three-and-a-half stories high, Eddy Hall lacks the grandeur of some of the more prominent buildings on campus, and most students hurrying by daily wouldn’t recognize the modest red brick structure as a school staple.

Erected in 1881, it was the University of Minnesota’s first building.

Now 130 years after opening its doors to the school’s first students, come fall Eddy Hall will be closing them in hopes of a major renovation.

The University is looking to obtain $18 million for renovation on Eddy Hall, said Dean Carlson, a coordinator with Capital Planning and Project Management. The proposed renovation would include both interior and exterior upgrades.

The Board of Regents will review a preliminary request for state money at its meeting next week.

Just last month, the board approved temporarily closing Eddy Hall and the demolition of nine other buildings on campus to cut back on building operation and maintenance costs.

The University evaluated all its buildings over the past year for possible demolition or closure based on efficiency and upkeep costs. Buildings like Norris Hall and Wesbrook Hall — both of which hold some historical significance — were deemed too costly to restore and will be among the nine to be torn down this year.

Eddy Hall’s history, however, is too much for the University to give up.

Originally called the Mechanic Arts Building, the hall was designed by prominent architect LeRoy Buffington and served many purposes from housing the School of Business in the early 20th century to being where Garrison Keillor first learned about radio production as a student.

“There is no way we will ever tear down Eddy Hall,” said Tim Busse, spokesman for University Services.

For the past year, Eddy Hall has housed the Department of Spanish and Portuguese Studies during Folwell Hall’s restoration. Mary Ann Beattie, the department’s associate administrator, said the building has been wonderful, and the department wouldn’t mind remaining there for good.

But according to Carlson, Eddy Hall “is in very poor shape” and requires major work. The building’s top floor has been closed due to structural concerns. Brian Swanson, budget officer at the Office of Budget and Finance, said it is too expensive to operate.

Carlson said Eddy Hall’s rehabilitation is also a part of the strategy for further cost reductions.

After restoring the building, the University is hoping to use the space for some of the academic admission programs housed in Williamson Hall, which may be up in the next round of demolitions, Carlson said.

Eddy Hall’s proposed makeover is part of the strategy to close down Williamson Hall, Carlson said, and one project cannot move without the other.

But the timeline for both projects is still uncertain.

The work on Eddy Hall cannot happen without state funding, which can’t be allocated until the legislature votes on the bonding bill next spring. The construction alone is projected to cost more than $11 million. Pre-planning for a design has already begun and will require some internal University funds.

If the state grants the capital money, construction can begin late summer or early fall next year, with a projected end date sometime in 2013, Carlson said.

But with many other University capital projects delayed due to a lack of state funding, the actual timeline for the project is unclear.

“Who knows what they will decide?” Carlson said.

In the meantime, Eddy Hall will be closing down at the end of the summer, something Swanson said will be fairly easy.

“We’ve done this before — most people walking by wouldn’t even know that it’s probably empty.”­­­