I am often asked about the value of the Internet – so I was pleased to see the results of a recent study by the Boston Consulting Group. They study the economic impacts of the Internet in G-20 countries. Some quick facts from the report make the case quickly:

These are compelling reasons for any community or business to consider their use of the Internet. The report seems to give ingredients, if not a recipe for growth too…

The growth is being fueled in large part by two factors: more users and faster, more ubiquitous access.

That seems to indicate that ubiquitous, faster connectivity will lead to increased economic growth. Hmm. More fuel to the fire of reaching remote areas with broadband and reaching users who have not yet shown an interest in the Internet. An interesting and related statistic is the perceived value of the Internet. Connected Americans perceive the Internet to be worth about $3,000 a year. It would be interesting to get a line item budget to see how people came up with that number – because it would be interesting to share that with folks who are not online despite its availability.

The report also makes a business case for businesses, especially small businesses, who have been dragging their feet when it comes to getting online. They classify businesses into four categories:

Many U.S. SMEs have integrated the Internet into their businesses. They are much more aggressive online than low-Web companies, particularly in activities such as search engine optimization, social networking, buying from and paying suppliers. They are even managing their business finances and recruiting staff online.

In many developed and developing markets, high-Web companies are twice as likely as their low- or no-Web counterparts to have a national and international customer base, as opposed to selling only locally. In the U.S., high- and medium-Web businesses expect to grow by 17 percent over the next three years, compared with 12 percent for low- and no-Web companies.

Again – very compelling. It’s nice to have the numbers to help make the case. Now I’d have to think about whether the Internet was worth giving up chocolate – but apparently 77 percent of American Internet users feel it is. (Luckily I think that was a theoretical question!) 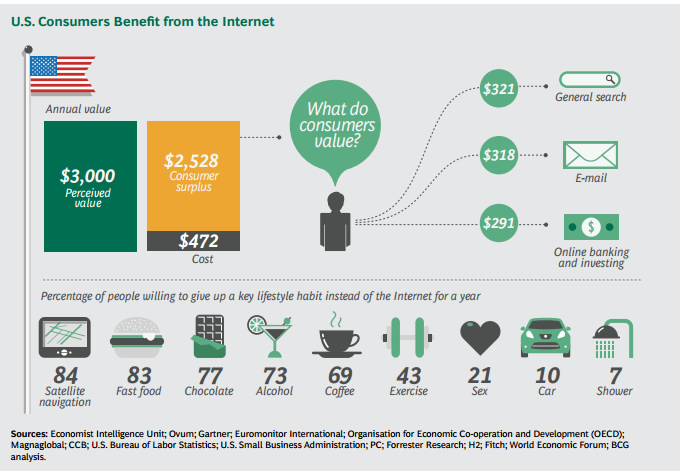