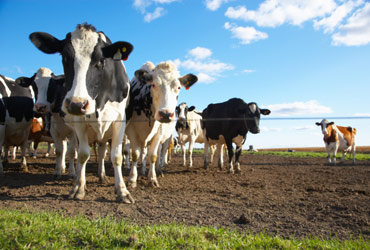 A New Ulm farmer, ecologist and business consultancy owner is providing strong evidence that agriculture and food businesses in the land of lakes are gaining ground in a new and greener economy.

Tim Gieseke, owner of Ag Resource Strategies, provides such evidence in both a new study and a book.

The study for the Minnesota Department of Agriculture, Livestock Environmental Quality Assurance Program, evolved from a grant authorized by the 2009 Minnesota Legislature and suggests procedures for certifying “Clean Water Legacy” farms.

While such a certificate doesn’t have legal standing with government agencies, it is recognized by the Minnesota Milk Producers Association, Gieseke said. And this is the start of affixing value to environmental practices on farms.

In addition, he makes the case even more broadly in a new book, EcoCommerce 101: Adding an ecological dimension to the economy, in which he calls on all businesses and especially the food chain to seek ways to assess and reward value to resource management.

His book is based on agriculture and the food chain although it has application for all businesses that operate in rural communities and in environmentally sensitive geographies. And just like the working paper for the Minnesota Department of Agriculture, the book calls for a second “Green Revolution” that links economics with ecology and offers helpful notes on the common origins of both words.

To make both economics and ecology interrelated parts of business management requires that there be a starting line and a finishing line so managers know both goals and when those goals are achieved, Gieseke said.

Being declared a Clean Water Legacy Farm with a Livestock Environmental Quality Assurance certificate is a solid start to determining value of environmental stewardship practices, he added. That is a building block; food industry companies are adopting similar practices that will reward suppliers—including farmers—who employ such practices.

In other words, market power is starting to extend marketplace rewards to people who operate in a greener economy. Minnesota is home to hundreds of small food and agriculture companies and to some of the world’s largest, Gieseke said. Most of these companies are moving in greener directions.

One huge example of this movement involves a global American company that doesn’t enjoy an image of supporting socially sensitive issues. Gieseke explains in the book how Walmart is now using its market power to measure suppliers around the world on a sustainability index. There can be no doubt that ecological management produces economic benefits in the global economy as well as here at home.

The term EcoCommerce is largely Gieseke’s invention. Others have used it over the years, he said, but it has gained widespread use since he began using it in lectures and papers that helped form the contents of his book.

Minnesota Agriculture Commissioner Dave Frederickson said Gieseke has pushed the economic benefits of ecological practices from earlier days when the latter headed an environmental project for the nonprofit Minnesota Project. And, the commissioner noted, Gieseke has helped Minnesota farmers, businesses and organizations as a consultant while bringing an applied perspective of being a fourth-generation Minnesota farmer.

Bascom Hill Publishing Group in Minneapolis published EcoCommerce 101. The author has biology and chemistry degrees and a master’s in environmental sciences from Minnesota State University, Mankato. He previously worked in soil and water conservation positions and for the Minnesota Project before starting his AgRS consultancy business in 2007.

For more than 30 years, scientists and nonprofit organizations have worked with farmers on ways to reduce and eliminate environmental problems derived from farm operations. More often than not, new approaches were referred to as “best farm practices” or “best management practices.”

Those terms still apply to farms and other businesses that leave an imprint on soil, water and air quality. They are still key to research and Extenson Service work provided by Univeristy of Minnesota scientists and at other land grant universities.

But as a University of Minnesota economist teasingly chided fellow applied economists in the academic journal Choices nearly two decades ago, such terms are a bit showoff-ish in the land of Garrison Keillor.

In a real sense, this is what the Minnesota dairy farmers and Gieseke are managing to do.

Going back to his earlier work with the Minnesota Project, and continuing on with consultancy contracts with agricultural groups, Gieseke said he has tried to put economics in the driver’s seat to steer people toward adopting sound environmental practices.

What this is starting to prove to even the most reluctant to change is that adapting sound resource stewardship practices does pay. Or, in the homey words of rural Minnesota, doing things right is “pretty good business.”