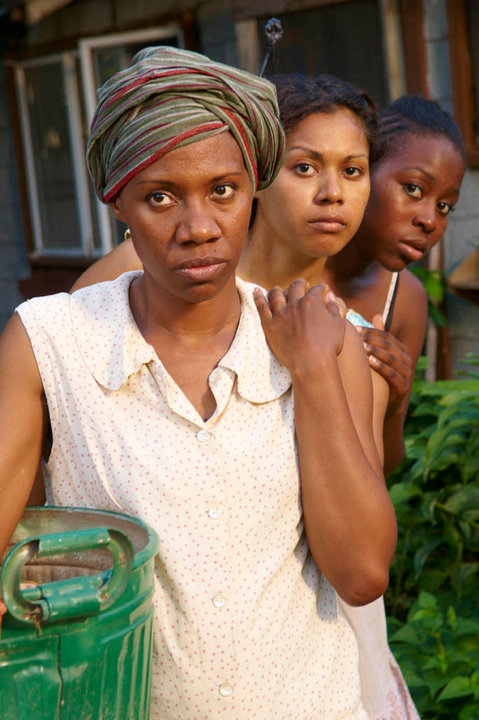 Last weekend I attended a wonderful play called Eclipsed, produced by Frank Theatre at the Playwrights’ Center. Written by Danai Gurira, the play tells the story of women surviving during the Liberian Civil Wars.

In the play are the four “wives” of an officer who lives in an encampment. The women refer to each other by their numbers (as in which number wife they are) as opposed to their names. The Girl, played by Macalester student Yeukai Mudzi, starts out the story in hiding from the man. Helena (number one, played by Shá Cage) and Bessie (number two, played by Hope Cervantes) have her hidden underneath a metal tub so she won’t have to become the new number four (the previous number four was killed). It doesn’t take long, however, for the Girl to be discovered, then face the same fate as the others.

What I really liked about the play was that none of the men that the women interacted with appeared in the play’s action. They were simply referred to, or indicated off stage, which focused the narrative on the choices and internal struggles of the women. Yes, even the men were victims in their own way—that was certainly clear, but the play didn’t dwell on that fact. Instead, the script really showed the strength of these women by showing their intelligence, and sometimes their folly.

The most interesting character for me was Maima (number three), who’s left the compound to fight with the rebels, but who returns periodically and ends up recruiting the Girl to fight. Nisreen Dawan plays the character with enormous fire and presence. I identified with the character. I found myself understanding why she would want to escape a life where she was basically a slave to one man and taking her chances elsewhere. Her gun, she believes, gives her power. But as the play progresses it becomes clear that she is just as vulnerable in the rebel army as she was in the compound. Instead of staying under the protection of one man, she has several: one with power, one who helps her with her “business,” and one who she likes, who pleases her.

In the last moment of the play, the Girl holds a gun in one hand and a book in the other. She freezes, with the lights accentuating the two choices. To me, this moment didn’t work. For one thing, I thought it was a bit over the top, and incongruous with the style of the rest of the play, which was straight realism. For another, I don’t think that up until that moment she had that choice. Her choice, throughout the play, was whether to stay and be a sex slave, or to fight, and possibly bring the same pain to others that was brought onto her. There was one book in the compound. She didn’t have a choice to continue studying while she was there—it simply wasn’t an option. Only when the fighting ends, and there is a possibility for escape, can she pursue a real life.

The discussion after the performance mainly focused on the state of Liberian refugees in the United States. One of the speakers was a representative from Keith Ellison’s office, Miksi Noor, and another was a woman who was involved in the peace process during the Liberian wars (Mayalan Keita-Brown). Keita-Brown said that everything in the play was true, that it really happened. Peter Radcliffe was also part of the panel. He is a history professor at Macalester whose expertise, among other things, concerns immigration and labor politics.

At issue for many Liberian-Americans is that they are currently classified with Deferred Enforced Detention (DED). Their status has been deferred a number of times. What happens if they are forced to move back to Liberia, a country where many of them haven’t lived for many years? They have made lives here—how are they to go back to a country they barely recognize?

The current situation for Liberian Americans was echoed in the character of Helena (number one), played with grace and subtlety by Shá Cage. After the fighting is over, she is told that she can go home. But she doesn’t know where home is. She doesn’t know if her family is still alive.  She has lived in the compound for so long, she doesn’t know how she will start again. Of course, it is not exactly the same. For Helena, the choice to move on clearly must be better than her current state. Many Liberian-Americans believe they are better off here, and want to remain in the country where they have made their new home.

If you want more information about how to help Liberian-Americans achieve permanent immigration status, contact Jewish Community Action at 651-632-2184 or the Advocates for Human Rights at 612-341-3302. You can also write a letter or call your lawmakers to urge them to support legislation for permanent resident status for Liberians.