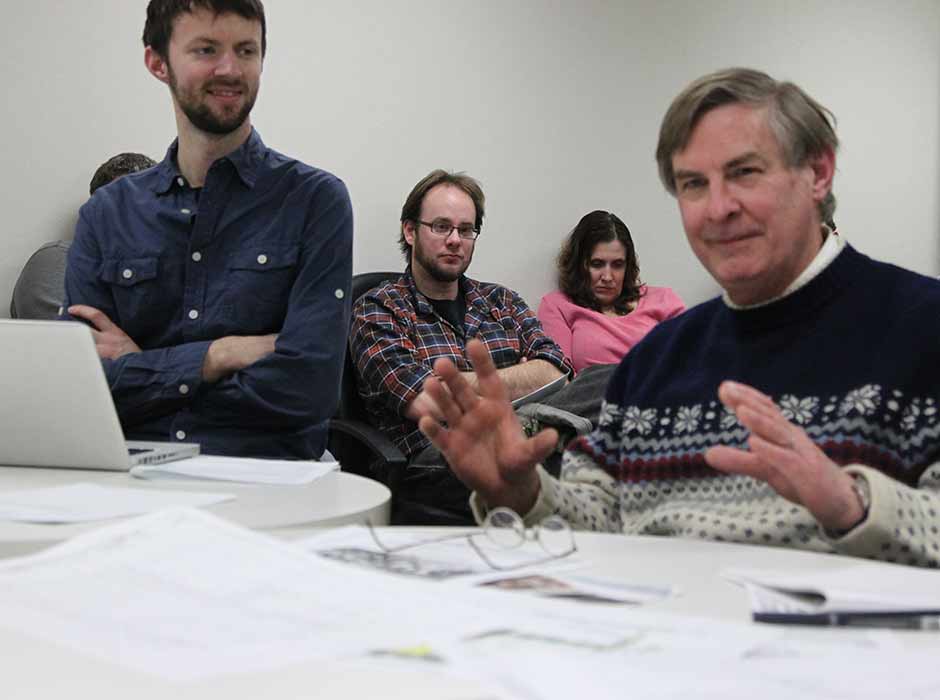 Plans for a grocery store on the 3800 block of East Lake Street are moving along, according to grocer Joel Ahlstrom and architect Mike Mularoni. The two presented to a packed house at the Longfellow Community Council office on Monday night during the meeting of the Neighborhood Development Committee.

One last hurdle for the project is financing. The project total is $4.5 million, and the majority of funding is through bank loans, which are expected to close in mid-April. The project has a remaining $180,000 gap that they hope to fill through community loans. Once the project funding is secure, renovations and demolition will begin. The store is expected to open by mid-November. 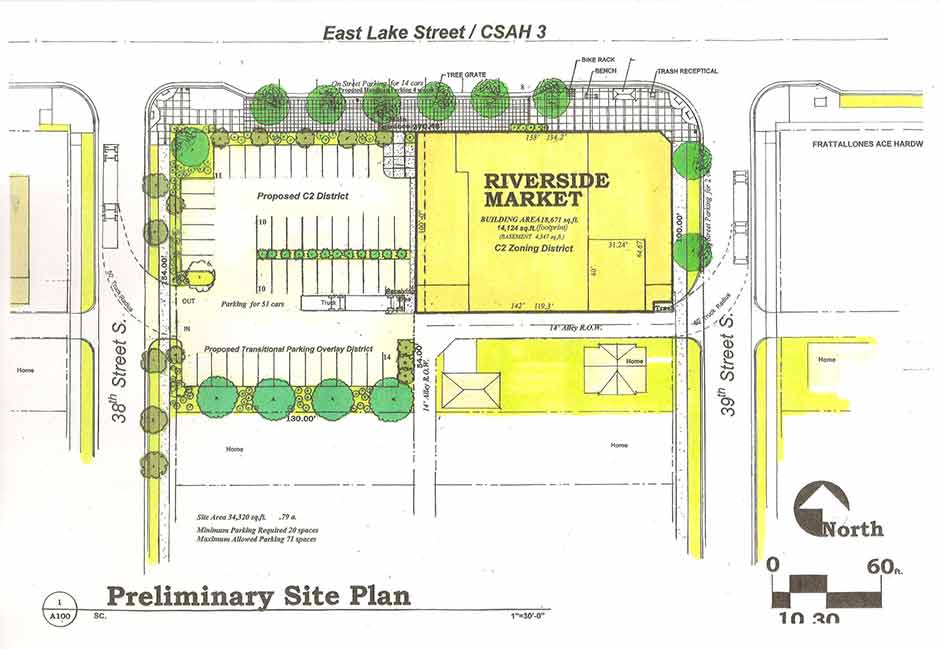 The Riverside Market will fill the entire block between 38th and 39th Ave. The Peterson Machinery building that is currently on the block will be renovated and will house the new store. The remaining buildings, which include several storefronts, a house, garage, and shed will be removed. The architect plans to keep much of the original features in the Peterson building, including the high-beam ceilings and all of the windows. They will also daylight windows that had previously been covered over. The building will be retrofitted with energy saving technologies throughout. Architect Mike Mularoni said, “The building will meet or exceed the energy code for new construction, even though it is an old building.” 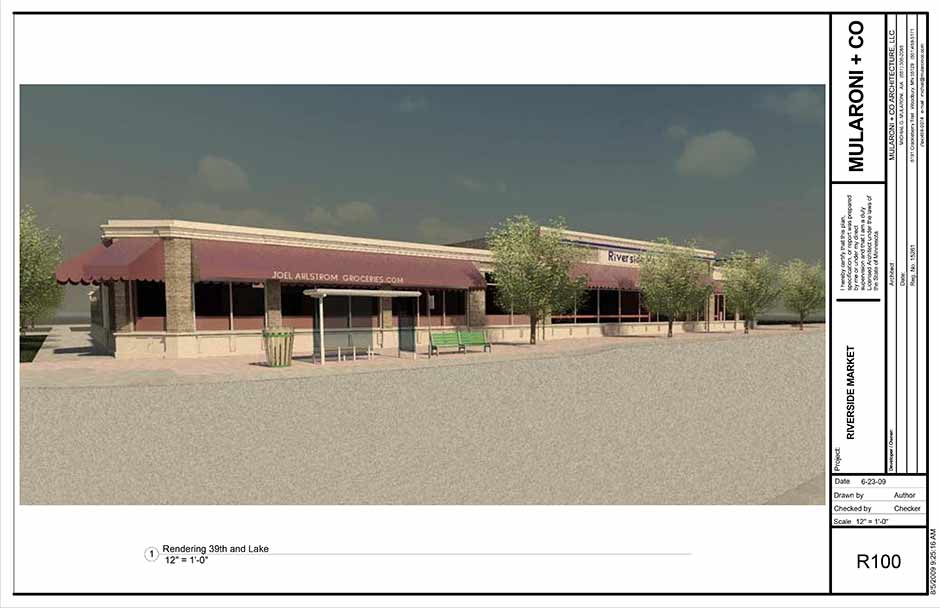 The grocery store will keep many of the features currently in the Peterson Machinery building, including the windows. Hand-crank awnings will be added to give it a vintage flair.

The Riverside Market will be modeled after grocery stores from the early twentieth century with vintage decor, tin ceilings, wood floors, and historic displays of Minnesota food product packaging. On Saturdays, Ahlstrom plans to showcase hand crafts such as butter churning and candle making, and a barbershop quartet may make an appearance some Saturdays. The grocery store has been four years in the making, so Ahlstrom has had time to think about exactly what he wanted. He commented, “I don’t think a grocer has had more fun than I’ve had with this store.”

His love of old-fashioned grocery stores makes sense. Several years ago he was shocked when he ran across an old photo of his grandparents as a young couple standing in front of their grocery store at 2700-17th Ave. S. He never knew his family had been in the grocery business in Minnesota – he grew up in Michigan and knew his father grew up in Iowa. Decades later he is opening a grocery store, that will have a similar feel to his grandparents’ store, not far away from where they had set up shop. 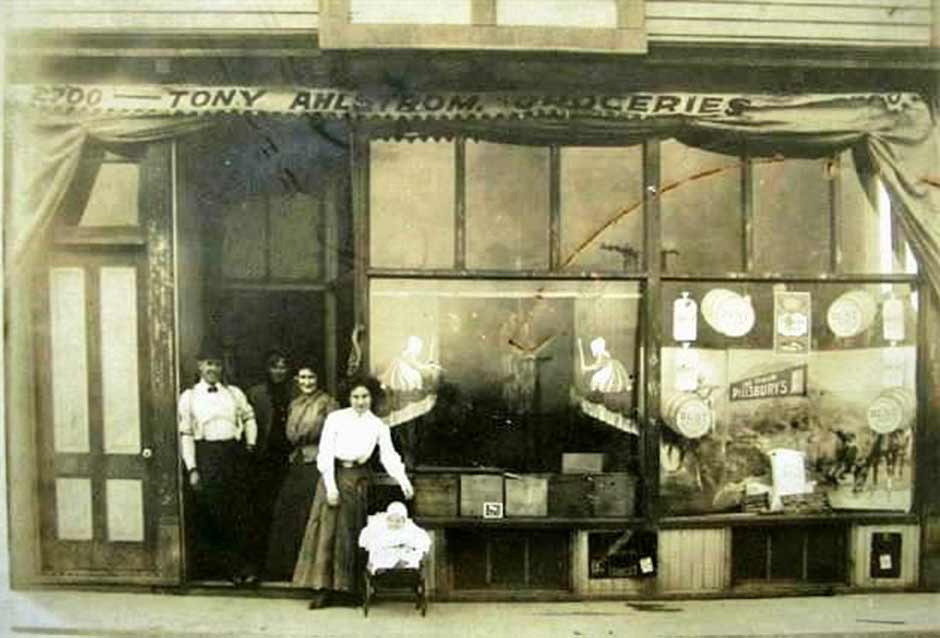 Ahlstrom has been in the grocery business for 56 years, starting in high school. He owned the Riverside Market in Seward, and now owns a grocery store by the same name in Isanti.

Ahlstrom plans to sell both conventional and organic products at prices competitive with Cub Foods. The store will have a bakery, prepared foods, and a deli. A butcher will be on staff to make specialty ham, bacon, and smoked meats for the store.

The market will be 14,500 square feet, and Ahlstrom plans to layout the store so that people can find what they need and get in and out quickly. He will also take customer product requests and is willing to place special orders by the case for customers. At the meeting, Ahlstrom emphasized how important customer service is to him. He said, “I know what people are looking for, and it isn’t Cub or Rainbow.”

A bike rack will be available at the store entrance. There will be 46 parking spaces in addition to parking on Lake Street, which exceeds current city regulations.