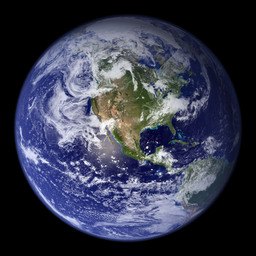 UPDATED 4/19, 1:50 p.m.: Every day should be Earth Day, but we’re far from making that a reality. For now, April 22, 2013 will have to do. Monday marks the 43rd anniversary of Earth Day, and the concluding note in the seven days of Earth Week. (Apparently we’re in the middle of that right now–start celebrating!)

At this point, I could spend a few paragraphs bumming you out. I could talk about the Great Pacific Garbage Patch, where an estimated 3.5 million tons of trash reside in the middle of the Pacific Ocean in a swirling mass of trash that is, by some estimates, the size of Europe. (Seriously.) I could tell you that according to the EPA about 80 percent of what Americans throw away is recyclable, though our recycling rate is at 28 percent. Maybe I could post a picture of Venice’s historic flooding and talk about the thousands of coastal cities and islands that are at risk thanks to global warming and rising sea levels.

Those things are important (…and depressing in equal measure…), but Earth Day is a largely a positive movement, a chance for “individuals, communities, organizations, and governments to acknowledge the amazing planet we call home and take action to protect it,” according to the Earth Day Network. They estimate that around the world, over one billion people will take some part in Earth Day celebrations this year, in reflecting on the past but also in looking forward to a better future.

Be one of the billion this year. There are tons of opportunities around the Twin Cities over the next few days; here are some highlights. (You’re probably going to want to stay tuned for changes due to weather.)

There are cleanups all around the cities this weekend. Help the city of St. Paul pick up the trash that’s accumulated over the winter around the city on Saturday; five kick-off locations include Como Pavilion, Harriet Island Pavilion, Highland Pavilion, Phalen Pavilion and Indian Mounds Shelter. Oops — canceled late in the day on April 18, because of snow. Try for one of the other upcoming cleanup events scheduled by the city.

Across the river, you can do the same in Minneapolis. 2,000 volunteers removed 9,000 pounds of garbage last year–so know that you’re making a difference this Saturday if you show up (and if weather permits).

There are lots of smaller cleanups throughout the weekend as well, including a Minneapolis watershed cleanup and a South Creek cleanup.

You don’t have to get your hands dirty to celebrate planet Earth. On Saturday, the City of Roseville hosts family-friendly Earth Day crafts, games, tree-planting and a walking parade (…OH, and there will be cake!).

On Sunday, the Midtown Global Market will host an Earth Day celebration with activities around the theme “The Way We Grow” (like sustainable cooking demonstrations).

Head over to the Science Museum for a more educational celebratory experience; there will be presentations from a variety of organizations (including NASA) and live music.

All weekend long, Como Zoo will be Partying for the Planet with educational programs, games and crafts; “leave with some great ideas for reducing your own impact on the planet.”

On Earth Day itself, James Lenfestey will read from his new poetry collection Earth In Anger: Twenty-Five Poems of Love and Despair for Planet Earth at the Bockley Gallery.

Then there’s the University of Minnesota Extension’s 2013 Urban Agriculture Expo on Saturday, April 20, at the Sabathani Community Center in Minneapolis. The Expo will be from 9 a.m. to 1:30 p.m., with educational seminars beginning at 9:30 a.m. For a schedule of events, directions and more information, click here.

In St. Paul, the St. Anthony Park neighborhood is talking Transition Town on Saturday — read all about it here.

If you’re not a runner, don’t despair; at the Paul and Sheila Wellstone Center, Mother Earth Fest 2013 offers “opportunities to get out and move around with balanced fitness and wellness activities, take time out to reconnect with the Earth, and enjoy our tasty “green cuisine” foods that pack flavor without the plastic.” Or try tromping around at the Richardson Nature Center, which invites visitors to celebrate in the Off-Trail Nature Exploration Area (rubber boots advised).

The Sierra Club is inviting Minnesotans to the Capitol for an Earth Day rallly to “support clean energy and good jobs.” (Opportunities to meet with representatives are available, with an RSVP.) There’s a Young People’s March for Climate Action on Earth Day afternoon; organizations like MN350 and Fresh Energy are all calling supporters to St. Paul to demonstrate. Governor Mark Dayton is scheduled to speak at the Day of Action for Clean Energy and Jobs. (In sum: if you head down to the Capitol on Earth Day, you’ll probably have some company.)