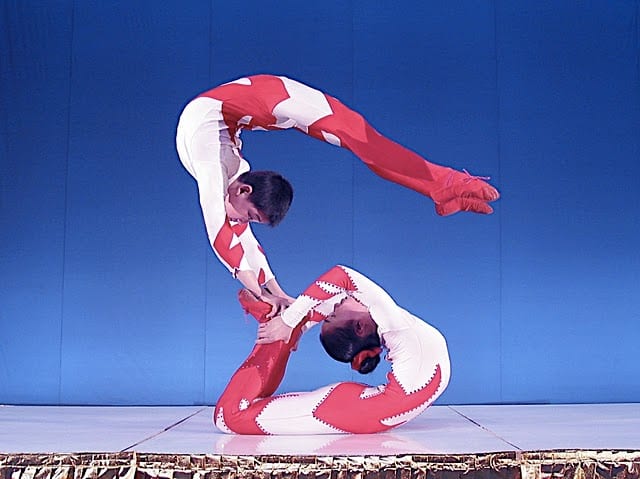 The Federation of Returned Overseas Chinese hosted a spectacular presentation of Chinese arts, acrobatics, music, and dance on January 10 for an enthusiastic crowd at the Orpheum Theater.  Seeking to “give a full show of the strength of character of the Chinese culture, and develop and expand the civilization of the Chinese nation,” according to the program, Carnival China Style mixed traditional art and performance with modern show-stoppers in an evening of glitzy feats of skill and gorgeous artistry.

Minneapolis was the third stop for the Carnival China Style tour.  The Chinese New Year celebration previously stopped in Vancouver and Ottawa in Canada, and Chicago.  After their Minneapolis stop, they will continue on to Denver and then Seattle.

Huang Ping, the Chinese consul general in Chicago, said that the he hoped the “grand show of Chinese arts” will bring to us “the joy and happiness and better understanding of Chinese culture.”  Ping noted that three of the artists for Sunday’s event also performed for President Obama.

Secretary of State Mark Ritchie introduced the show, greeting the Chinese diplomats and artists, and thanking friends, colleagues and partners who made the performance possible.

Guiding the audience through the myriad of performances were Wang Lu and Zhang Cheng, speaking in English and Chinese, who offered tidbits of Chinese history and knowledge, and numerous corny jokes between the acts.  Lu, who spoke in a British accent, informed the audience that the show sought to highlight arts from all of the different ethnic groups in China.

Traditional performances included Peking Opera fiddler Jiang Kemei and “Primitive Singing” of Yi singers Li Huaifu and Li Huaixiu.  The Beijing Dance Academy, an adept ensemble of young Chinese women, performed several pieces from different cultures, such as “Spring”, composed by Li Huanzhi using source material from the folk Yangko and Shaanxi  region.  They also performed “Song of Harmony”, based on the style of the Chinese Han Dynasty, dressed in pink flowing outfits with oversized sleeves, dancing and playing drums with their feet.

A number of the performances blended traditional styles with modern interpretations, such as Amuti Rouzi’s passionate, modern rendition of the  Xinjiang Uygar songs “In That Distant Place” and “Girl from Daban Castle.”  Similarly, “The Three Snow Lotus Sisters”, from Tibet, who wore fur hats with tails, blended Tibetan singing with a bluesy beat.

The most jaw-dropping moments of the evening came from the seemingly super-human acrobats.  Contortionists Liu Jiayin and Bai Chanpu seemed to turn their bodies into rubber as they bent their bodies into impossible shapes, with a bit of break dancing weaved in.  World record-holding Jin Linlin astounded the audience by hula-hooping hundreds of hoops in her mesmerizing act.

The audience at the Orpheum, comprised of many families and Chinese Americans, were very pleased with the event.  Helen Liang, speaking after the show, said “It was wonderful to see the arts from all the different parts of China.  Amy Shih, who saw the show with her husband, said she thought the Carnvial was “fascinating.”

The emcees said at the end of the show that they hoped the performances would inspire Americans to “Make a trip to China in the not too distant future.”