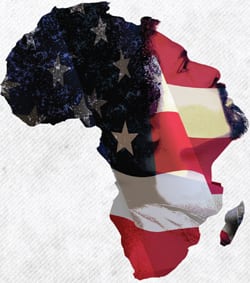 What does it mean to be an African…an African in America…an American Afrikan? The first solo album by multidisciplinary artist e.g. bailey sheds light on these questions and offers a personal look at a journey that began 400 years ago.

A native of Liberia who has made a life in America, reminds us in his new album titled, “American Afrikan,” that the double consciousness that W. E. B. Du bois discussed many years prior, continues to live on in all of us with hybrid identities. Those from the motherland of Africa who live in America know this challenge all too well.

“I see it as reaching beyond the album. The tracks are woven together to intentionally follow each other. The transitions are important, the title is important…it’s using the vehicle of a recording but it’s intending to be a narrative or a story. It plays with different spaces…it moves fluidly. In some way’s it can be a soundtrack to a film. It’s a development of the African griot tradition. The “Africaness” should not be an after thought,” he stated.

Inspired by the likes of Toni Morrison and Amiri Baraka, e.g. likes to challenge traditional art forms and create something new by merging different genres of art into this project. Whether it’s the sound of a needle hitting a record, or the language of Igbo used in a track, everything in this project has a purpose.

“The album is dealing with, where are we today as Africans? How do you pay tribute to Africa even though you are so far away? You have to be true to the story.” This project is a merging of e.g’s experience as an American Afrikan. It started off simple, but became more complex and deeper as he went on, as historical events such as the election of Obama added value to his story.

As life experience between two continents has showed him, “there are many things that can cause you to forget the beauty of where you’re from…it’s just remembering that we are a strong people and we have survived and will continue to survive in the most difficult of places and circumstances. It’s important not to get too lost in the wilderness here. You have to remember your greatness.”

For more information on e.g. bailey and his album release party on Feb. 20th 2010, at the Bedlam Theater at 10pm go to: www.myspace.com/egbailey or www.egbailey.com. e.g. will also be one of the upcoming featured artist in a future African Global Roots (AGR) event. For more information about AGR, go to: www.agrmn.com.