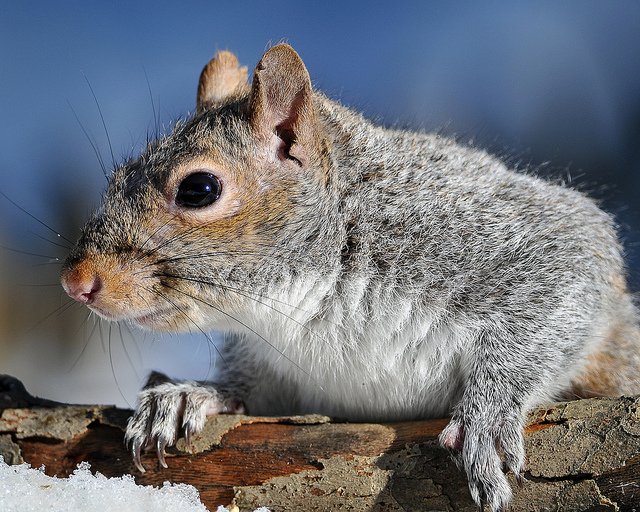 Some rights reserved by U. S. Fish and Wildlife Service - Northeast Region

Is this a local thing in Standish Ericsson or across more neighborhoods?

Die off may be too strong a term, but I can add that three weeks ago a squirrel had dropped on our patio. First time in nine years I had found a critter randomly in my yard versus in the street.

I certainly hope it is a City wide phenomenon. Grey squirrels are an “Invasive species” and do harm to our own beautiful flying squirrels. It is legal to kill grey squirrels, you just can’t shoot a gun at them. Blow guns and bows work just as well. I hear corn on a bike wheel over a garbage can of water works like a charm.

Of course you can live trap them and take them over a body of water to let them go and they will not come back. After giving that advice to a friend he later reported that letting them go off of the Franklin Avenue Bridge was really cool and that they do not fly nearly as good as flying squirrels. He was not sure about their swimming abilities after flying to the water. I laughed and told him I intended that he take them all the way over the bridge. He thought that would not be nearly as much fun.

But the last straw was finding several flying squirrels that they had drug out and killed. Since my war with them began I now see flying squirrels each evening when I sit outside. My grey squirrels now get taken down to the river bottoms, or down to Bloomington. My son prefers to transport them rather than exterminate them. Sometimes five or six a day. A few times two trips in one day for ten or twelve total. Live traps work great and penut butter is like crack cocaine to them. They simply cannot resist it. Many times finding two in one trap.

The City really should do something to address the infestation of these harmful rodents. Just like it would with an infestation of grey rats. (A much better rodent in my opinion) Both rats and squirrels carry the same disease and may cause health threats to humans as well as property damage. They both carry the fleas that can threaten humans.

So we should celebrate who ever is killing them, as long as they are doing so in a way that does not hurt people or their pets. Who ever they are, they do the City and its natural wildlife a favor. By the way two years ago I hear that 235 of them went across the river. And a couple into it. 🙂 Perhaps others can share what they believe is the most effective means to removing them or legally killing them. Though they are rats, putting out rat poison is a bad idea; it might harm birds or flying squirrels.

Nice to see the forum go back to its squirrelly roots.

I do not want them (squirrels) to suffer; I just want them dead. When they gnawed through the wooden eaves into the unfinished attics at two duplexes, they chewed through framing, electrical wiring and flexible heat duct.

To control them, I set out two dishes in each attic. One held peanut oil laced mouse poison, the other held anti-freeze. Dead squirrels all over the yards. Quite a sight; and a relief. End of that chapter of story.

If you want to protect your property against damage that squirrels can do, use the strongest capsaisin products that you can find; they really work, on mammals anyway, and they do not kill. Squirrels remember these painful chew experiences and don’t come back.

The squirrels were here first. We are guests in their territory. They might mistake “your property” for a part of their territory so finding ways to may it inhospitable for the squirrels should be preferable to taking joy in killing them, sometimes in vicious ways. It does nothing for our character to kill little animals.

We have lived with squirrels since we moved to Minnesota in 1973. They have eaten our daffodils, our jack o lanterns, and some yummy parts of the compost. Yet we do not resent them their territory. To do so would diminish our own humanity. Some people do believe that wherever humans go, all other animals must be eliminated from their settlements. Albert Schweitzer and others believed we judge ourselves by how we treat our fellow living creatures.

Squirrels may seem like nothing but vermin and pests, imposing on our settlements. But they are not. We are the imposers on land held by the squirrels for thousands of years. We should learn to live with our neighbors. They may think we put the delicious daffodil bulbs our to their dining enjoyment but they give back a more diverse life to us in our urban confines.

While I am very reluctant to disagree with Laura, and I do agree we should learn to live with our neighbors, there is a plaque in Mears Park in St. Paul commemorating the gift from a generous Kentuckian of two squirrels to the new State of Minnesota. It is possible, I conclude from that memorial, they are an invasive species.

I defer to Laura and DNR on the matter of the gray squirrel predating homo sapiens on this part of the continent, however, I would add foxes to the natural predators of squirrels. Like many homeowners trying to protect my garden I have trapped squirrels and released them at the Hiawatha Golf Course (with a hopeful prayer they would not find their way back to my tomatoes). A few years ago foxes found their way up Minnehaha Creek to a paradise filled with squirrels. At one point there were two dens on the course with 6 or 8 cubs in each. The next year coyotes showed up, and the foxes disappeared. The coyotes were not nearly as good at tracking and killing squirrels as the foxes, and now the squirrels once again predominate.

I did a Google search. The Eastern gray squirrel is native to North America. They have invaded England and other parts of Europe.and largely replaced the red squirrel.

Another example of American imperialism! Another reason to surrender to every foreign enemy.

There must be a conspiracy somewhere. What does the squirrel issue prove?

3. Undermine the Commander in Chief if you don’t like his party affiliation.

Squirrels hide nuts because they want to raise the level of our civic discourse. Our politics drives squirrels up a tree!

Was American independence a mistake? The Royal Baby will be more mature than Congress as soon as he can walk.

Vladimir Putin is mediating the foreign policy battle between the President and Tea Party. Maybe he will appoint a Regency Council to run the US government.

I’m not wacky enough to run for Mayor.

You forgot the most obvious, they are reds, in fact they are the real red menace.

Blame the Park Board for bringing gray squirrels to Minneapolis.

“Wirth’s other notable contribution to the Minneapolis bestiary was the gray squirrel. Wirth imported the gray squirrels from Kansas in 1909 to replace the red squirrels he paid boys to shoot in Loring Park because they were eating songbird eggs. Wirth believed the less aggressive grays would make better neighbors. He noted in 1917 that the gray squirrels had extended their range throughout the city.”

(Your welcome)
and what if….
According to The Minneapolis Morning Tribune 1913

“There are to be no ostriches imported this year to add to the attractions of the parks,” the Tribune reported. “Much though Superintendent Wirth would like to see the large birds roaming through the parks, he readily acquiesced when the park board, for reasons of economy, refused the offer of a California ostrich farmer to stock the parks with ostriches at relatively small cost. Mr. Wirth and some of the park commissioners hope, however, that by next year the board’s finances will allow the purchase of at least a limited number of ostriches.”

Thanks,
Scott Vreeland
Minneapolis Park and Recreation Board
Commissioner District # 3