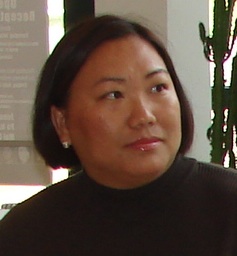 This past summer Dyane Garvey decided that she had accomplished enough goals in four years as interim executive director for Hmong Arts Connections and left the organization to spend more time with family and other pursuits. Garvey said HArC has established a concept of community leadership and should do well under its new director, May Lee Yang, a writer, playwright, performance artist who also exhibits strong organization leadership skills.

“I am really excited for HArC, and feel it really needs this for its next phase,” said Garvey. “I think she is really going to bring a lot of vitality and expand the literary community and that to me is exciting because the organization will continue to have its impact in the creative community.

Raised in Detroit, Garvey came to Minnesota to attend Macalester College. With degrees in economics and communications, she married and went on to work in the financial services industry for six years before becoming a homemaker for two children.

She is also an entrepreneur with projects that raise money for the Hmong Women Giving Circle and others before taking the lead at HArC.

Garvey said it is important for HArC to remain a group in support of its own community so Hmong artists aren’t having to compete with duplicate programs of non-Hmong organizations. Her priorities included grant writing and helping young professional artists to develop measurable project planning skills.

“Since 2006, HArC has helped 114 emerging artists and writers and reached more than 5,800 people with literary activities and art exhibitions with partnering institutions – and not including data from schools using Paj Ntaub Voice in their curriculum and social media,” she said.

Altogether HArC has helped Hmong artists acquire more than $30,000 in grants in 2009. Garvey said HArC succeeded only after stabilizing its operations and raising enough money to provide for managerial staff to handle operations and leave the artists to do the creative work. She noticed the pool of arts administration leaders was very small and set out to cross-train people in the field.

“A lot of time these artists have never written a grant before and they don’t’ know how to do the design component,” she said. “They need to know how to create realistic numbers, because sometimes they guess and they often don’t get enough money for what they are doing. Then they need to think about the resources they have to bring into collaborate and finish on time.”

Performance artist and spoken word poet Tou Saiko Lee worked with HArC to reconnect with other forms of writing and to create new works. HArC helped him focus his goals with the results leading to four grants including a Jerome Travel Study grant in 2008 and InterMedia Arts in 2010.

Pa Dao Yang, a sociology senior and an intern at Augsburg Pan-Asian Student Services, said HArC and Garvey spent countless hours helping her with management skills during a two-year Phillips Project grant from the Minnesota State Arts Board. She said the skills are applicable to her career plans in higher education.

“Dyane’s love for the Hmong community and for the arts is endless,” said Yang. “She is absolutely motivating and inspiring.”

She described Garvey as a sort of “Superwoman” who somehow made time to work with artists and her family, going to choir rehearsals, being a mentor, and a storyteller.

“Dyane did not only commit herself to the project but to me as well,” said Yang. “She is an extremely caring person and I cannot thank her enough for all her support.”

The future HArC leaders will be people with a strong vision for the creative arts, along with gift for continuing capacity and building community partnerships. Garvey said it takes people who can inspire others at time when the creativity and art that is Hmong culture in daily life is beginning to detach itself and become an abstract. Only awareness will ensure this source of identity continues and needs to be nurtured in the home and community.

“Art is so integrated into our way of life,” she said. “…Today, the visual arts and writing are just the new skills we are adding on to what we already have as a community. It is the next level.”

HArC formalized after more than a decade after it began as a summer writing program that would lead to the Paj Ntaub Voice in 1994. This Hmong literary biannual journal established by Mai Neng Moua, a St. Olaf’s student at the time, was the first English language publication for emerging Hmong American writers.

Under the direction of Moua, the journal grew and in 2002 published “Bamboo Among the Oaks” (Borealis Press), the first Anthology of Hmong American writers. In 2003 the journal became part of the Hmong American Institute for Learning, a nonprofit that began to expand its goals.

Garvey said the anthology is unique in capturing the first 25 years of the Hmong American experience following the war.

“You get a really good sense of the kinds of emotional struggle the Hmong have been going through in the 80s, 90s and early 2000s,” she said.

Until Paj Ntaub Voice the stories of the Hmong community were from social workers, historians, missionaries or anthropologists. Now for the first time a bilingual Hmong American generation offered its own voice through creative fiction, memoirs and poetry.

Some of these stories and narratives of the refugee period reflect the oral tradition and were transferred into the written word for the first time. Garvey said this was a special period of time that will not be replicated with succeeding generations – but added these traditions and culture are always in flux and that Paj Ntaub Voice is still needed for the new generation to find its own voice from this foundation.

“We are very passionate about creating Hmong literature for Hmong community,” she said.

HArC has a purpose of inspiring literary and visual arts that exhibit the diversity of experience of a dynamic Hmong community. It may only appear to be one homogeneous group to the non-Hmong, said Garvey.

“We are having conversations and debates and struggles, and Paj Ntaub Voice does a good job of capturing that with its own initiative to foster creative literature and writing,” she added.

In 2007 Moua decided to concentrate on public policy projects and HAIL continued under Bryan Thao Worra until Garvey took over as interim director in 2007.

Garvey said Mai Neng Moua had the vision, passion and energy needed to shape the early development of the organization.

“It’s really overwhelming to run a nonprofit by yourself,” said Garvey. “Mai Neng’s work has been trailblazing and she basically founded the contemporary Hmong American literary movement; and without her vision and work we wouldn’t have had a literary movement like we have now.”

Garvey said the best way to transition was to build on assets and focus on what is working with community participation and impact. She volunteered for her first year to establish a management structure and fundraising capacity.

With new goals established she said the funding world recognized the new HArC as a self-sustaining organization to support and inspire the vibrant and professional Hmong arts and literary community in its expressions of Hmong culture.

She said The Paj Ntaub Voice needed to evolve from a grassroots publication to one with infrastructure and a formal production process. The publication operated with an editorial board and volunteers but they would come and go. She said it needed stability and a balance between the creative and management side.

With funding Garvey said a permanent staff created job descriptions that help with retention of volunteers and interns to handle jobs they could grasp and develop skills that transferred to their own projects and other organizations.

Garvey said the Paj Ntaub Voice is the longest running Hmong program of its type, and that this history helped HArC with other projects that incorporate storytelling, music and traditional expressive art forms.

“Throwing Pebbles in the Pond” began in 2008 as an annual exhibition of professional visual artists at Homewood Studios in North Minneapolis. She said this relatively small population of visual artists, photographers and performing artists need to be featured in public spaces to grow and not just create art for the corporate world.

“I changed it to a gallery showcase of visual artists in a way that can really inspire them to continue to do their work,” said Garvey.

Many don’t have a place to belong, she said, and HArC can help them with skills building and to network with others. She wants to inspire them to continue producing art.

“It was also to build community among visual artists,” she added. “This is another group that really needs a lot of fostering, but does not have the kind of direction like the literary community.”

HArC inspired Yer Yang to reconnect with the traditional needlework she learned as girl from her mother. She said Garvey created awareness and opportunities with her work and was crucial with grants and resources for herself and other artists that want to create but are also homemakers or working other jobs.

“Dyane has been the back bone with helping me as a paj ntaub artist manage my time and improve my grant writing skills and opportunities,” said Yang. “I’m gonna miss her but I also know that whenever I need help, she will always be there for me. She’s been a blessing.”

Garvey said that HArC has a role in encouraging young Hmong artists that may have a passion for community but no outlet with which to share their voice.

“We know there are a diversity of opinions and world views in our community and we don’t dictate what is art and what to produce and what not to produce,” she said. “This is not a contract between us and the community.”

Rather, she said it is about helping artists deepen skills and to look more deeply and honestly into their own experiences with an environment that nurtures those influences in the same way the literary community does with writers groups.

“If the community likes it or doesn’t – that is the exchange, and we just enable them to get to that point and help them to build confidence and a professional portfolio so they can take that work to different venues.”

Aside from the artists groups, Garvey works on building professional skills to help artists move to the next stage in making a living from their work. Some may already be professionals in other fields but she said they haven’t been able to effectively assess the value of their artistic work as individuals or in collaborations.

“We really changed the direction of the organization to develop skills,” she said. “The Hmong artist community has really matured and what we are seeing is the developing skills weren’t maturing and I think my transition is really a moment in seeing that maturity.”

Future projects include a leadership skills development partnership with the South East Asian Community Council in Washington, D.C. that was funded in part by the Minnesota State Arts Board.