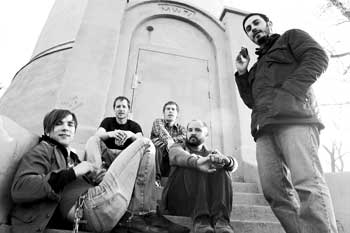 For a while, Duplomacy lived a charmed musical life. The musical brainchild of 30-year-old Minnesota native Andy Flynn, Duplomacy quickly progressed from solely a bedroom recording endeavor to a hotly buzzed-about band in town, scoring a recording session with well known indie-rock veteran TW Walsh (formerly of Pedro the Lion) on the strength of their demos and landing choice opening gigs for the likes of Valet and Kid Dakota within weeks of performing live for the first time. By the end of 2004, Flynn’s band had already inked a deal to record for local label of the moment 2024 records, home to such heavy hitters as the Plastic Constellations and the Hopefuls. It was easy to see why so many fell in love with the band so fast: their placid angular guitar pop evoking shades of classic collegiate rock gone by (Pavement, Murmur-era REM), while Flynn’s boyishly skewed vocals placed him squarely in the present indie-rock pantheon of successful stoned-out troubadours like Grandaddy’s Jason Lytle and Built to Spill’s Dough Martsch. By all rights, 2005 was to be the year that Duplomacy released their debut full-length and possibly experienced widespread success beyond the Twin Cities club circuit. Suddenly, however, Flynn’s good fortune turned bad.

“In a way I feel like we ran into so many problems making this record that it’s almost comical,” says Flynn of Duplomacy’s long-awaited debut, All These Long Drives, which finally sees release July 11. “We were set up to record with TW Walsh again and were really excited about it but then Pedro the Lion was asked to go out on tour with Low [in late 2004] and so our schedules didn’t work out. At that point in time, we really wanted to get going on making the record so we decided to look elsewhere. In retrospect, given how long it’s taken, it wouldn’t have been a big deal to have waited for him. Then we thought we would go record with Darren Jackson [of Kid Dakota/the Hopefuls] which we were also excited about–I had no doubt that he would help produce a great record. Then Low asked Kid Dakota to go out on tour [in early 2005] it ended up being a similar situation to what happened with Walsh. It started getting kind of scary after a few months: I felt like nothing was going to happen.”

Eventually Duplomacy settled on producer John Tranberry, a man perfectly suited to highlighting the dynamics of their sound. Even then proceedings were held up by scheduling difficulties, resulting in the group recording in short fits and starts over a period of several months. All the delays proved worth the wait as Tranberry’s engineering skills provide the same classy sheen and ear for just the right arrangement suggestion that helped propel Valet’s Life on the Installment Plan to the top of many local critics lists in 2004. Tranberry has managed to distill the essence of Duplomacy’s live sound while simultaneously adding just the right amount of bells and whistles – clever layering of Flynn’s vocals, the occasional effects treatment to a guitar line – to make it a bona fide studio record that holds up to repeated listens.

The differences between Duplomacy’s debut EP, which featured Flynn on nearly all instrumentation, and All These Long Drives – recorded with a full band line-up featuring guitarist Adam Egerdahl, drummer Judd Hildreth, keyboardist P.A. Corts and bassist Erik Dahl – are subtle and most noticeable on the three tracks from the EP which are re-recorded. The new musicians add heft to EP standouts like “Remember This” and “Coppertone” while still preserving the skeletal beauty of Flynn’s simple but captivatingly fluid guitar lines. Elsewhere, as on the rough chugging bridge in “Stars” and the gnarly dual guitar breakdown in the middle of “Suicide,” it’s clear that Flynn’s band mates have selectively dirtied up Duplomacy’s pristine pop with rock ‘n’ roll nastiness. The result is compelling.

“They’re still really my songs and I still write all the parts,” says Flynn of Duplomacy’s evolution from one-man-band to living, breathing rock band. “But just the fact that different people are playing the parts takes it to a totally new place. I can barely play the drums, so inevitably when Judd gets his hands on a song, it’s a little looser and much more rock ‘n’ roll. It ends up sounding different and better – like a drummer actually did it. There are many areas on the record where people in the band had better ideas than mine just in terms of little arrangement things and that was something I always welcomed. It would have been stupid for me to say, ‘No, that’s not how I wrote it.’ I know that I still have a lot to learn about writing music. The analogy I would use describing the band is that it’s kind of like a director working with great actors. I may be giving them their lines but their delivery is the craft: that’s where their skill shines.”

With its two-years-in-the-making record finally in the can, where Duplomacy heads next is uncertain. Flynn’s just glad to have the recently rocky past behind him. “I would love to say it’s been easy but I think all of us have had our moments where we thought maybe the band was kind of doomed,” admits Flynn. “Pretty much everything we tried to plan just didn’t happen. I’m starting to realize that probably everything in life sort of goes that way and that it’s a little self-indulgent to think plans falling apart is only important when it’s happening to your music. The dark points were there, but at the same time I try to keep in mind that we’ve also had a lot of really good luck. It’s been a mix of blessings and curses. Whatever the next step is I think we’ll be far more prepared.”