Not knowing quite what to expect, I showed up at the Hennepin Center for the Arts on Saturday to participate in Duniya Drum and Dance’s Fakoly African Dance and Drum Workshop. Three hours later, after both a dance and drum class, I left a sweaty mess complete with a bruised ego and sore hands, but man oh man, did I have some fun along the way!

I love to dance and was very excited to take this assignment. I knew right when I walked in the studio for my dance class that I was not prepared for what was about to happen. All of the other participants were in dance clothes or sweatpants. I was not. This was the first dance class of any kind I have ever taken in my life (outside of a few awkward days of high school, at least), so I had to look around to try to get some pointers from my classmates. Following their lead, I took off my shoes and started stretching until all the sudden the drummers who were lined up near the entrance to the studio started playing. After the class I was told that the drummers for our class were part of the National Ballet of Guinea, and they were visiting as part of the workshop. The instructor, Moustapha Bangoura, walked towards the front of the room and put his arms in the air motioning for us to come towards him, and with that, the class began.

We started with a follow-the-leader routine, a repetitive and simple exercise with Bangoura not saying a single word the whole time. There were few verbal instructions during the class, as Bangoura is from Guinea and even though he spoke some English, there was still a language barrier. Even without words, though, it was easy enough to understand what he wanted us to do. The follow-the-leader moves got more and more difficult and it did not take long before I was drenched in sweat. After about 20 minutes, the drumming stopped and it was time to move on to the next step. Over the next 45 minutes or so, we were taught a dance routine, broken up into many parts. This is where my inexperience became clear, as I was having a hard time remembering all the choreography when we started stringing together long portions of the routine. Eventually, when the class was able to do the full routine to Bangoura’s approval without music, the drumming resumed and we did the routine a few more times with music.

We were then signaled to form three lines at the back of the studio. We were taught yet even more moves that were intended to be performed while moving forward in the lines, from the back of the studio towards the front, where the drummers were playing. Bangoura taught us some new moves here but also incorporated some of the parts from the long dance routine we learned and were now familiar with. The last segment of the class was to form a giant circle and watch as a brave soul got in the middle and showed off what they had learned. Several of the students (including a few young children) flashed their new moves, and the instructor Bangoura gave us one last display as well. As I said, I love to dance, and I do not get embarrassed easily, but for the first time since I got over my fear of dancing about seven or eight years ago, I was too intimidated to get in the middle of a dance circle.

My inexperience showed one last time at the end of the class, as I started walking towards the back of the studio and I noticed no one else had done the same. I quickly realized I was supposed to join in a line with my classmates and pay my respects to each drummer by putting my hand on the floor in front of them and thanking them.

The class took a lot out of me, but I was only halfway done. 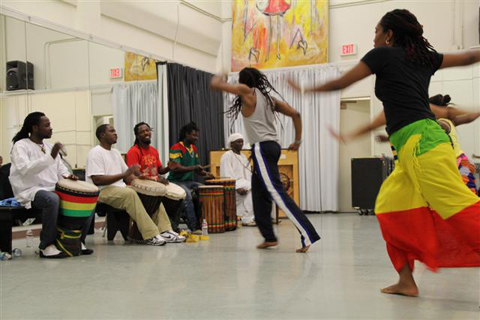 Up next was a drum class, which was taught by the workshop’s host, Fode Bangoura—no relation to Moustapha. We started with another follow-the-leader warm-up; as in the dance class there was very little verbal instruction, but it was not needed. The class was follow-the-leader the whole time, with Fode teaching us small portions of songs before stringing them together. Like dance, I don’t have too much experience with music classes, but Fode made it very easy to pick up , and I felt I was keeping up better in the drum class than I did in the dance class. Thankfully, this class was much less physically demanding than the dance class, but my hands were pretty raw afterwards.

This class was smaller and more intimate than the dance class, as we were all facing each other sitting in a circle. The drum class was a friendly bunch; when we had a break, a classmate noticed I was a beginner and gave me a few pointers. They were also very passionate, as most of them went to another drum class from the workshop immediately after ours finished. The mother of my friend—and Freaky Deeky castmate—Carolyn Kopecky recorded the whole lesson via tape recorder and cell phone video so she could practice at home.

I was very impressed with the dedication of many of the participants. When I left after my drum class, I saw many of my classmates from the dance class still hanging around, waiting for the next class. Fode drummed for my dance class, then taught the drum class, and when I left he had returned to the dance room to drum for another dance class. His hands must be made of stone.

I spoke with Whitney McClusky, a dance instructor and one of the workshop’s organizers, and she told me that Duniya Drum and Dance offers classes weekly at Patrick’s Cabaret including a dance class taught by Whitney and a drum class taught by Fode. Check their website for dates and times. I may not have done a very good job, but I did have a very good time at the workshop and am looking forward to taking more classes so that I will be able to keep up when the workshop returns for its fifth installment next year.