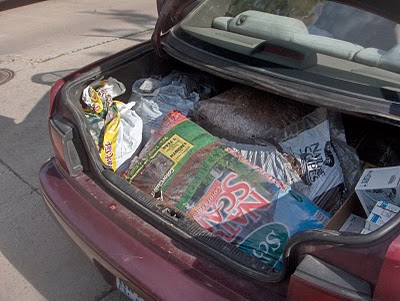 No doubt about it, the lifestyle of NoMi “revitalizers” is a frugal, green, and creative way of life. We do stuff like Dumpster dive garden mulch!

Yes, indeed, these bags of perfectly good garden mulch were just thrown out as garbage at a garden supply store in an affluent southern suburb; I won’t say which one. Each of the bags had a hole in it, but not a hole big enough to spill all the contents. In one instance, a MUSHROOM was growing out of a hole, and in another instance, some kind of green clover was growing out of a hole because, apparently, the bags had been sitting around with holes for quite a while. Most of the bags were high-quality cypress mulch, but there were also a couple bags of cow manure. (Heck of a thing, when you have to Dumpster dive for manure.)

The bags ended up back in NoMi where they will become part of our never-ending revitalization effort. Every day–seriously, EVERY DAY–frugal, green, artistic NoMi dwellers engage in these types of recyle, reuse, and RECOVERY efforts. But on this particular day I just happened to take a picture so guess what? It goes up on the blog.