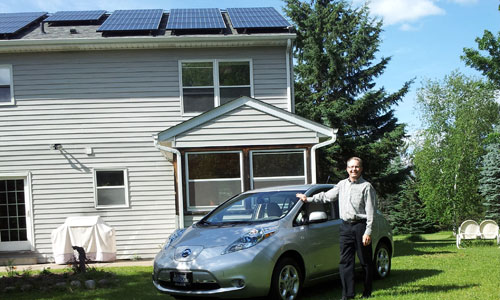 The new generation of electric vehicles (EVs) have recently been rolling out here in Minnesota. We caught up with early adopter Stuart Rauvola of Stillwater, MN to learn more about his experiences.

All photos by Stuart Rauvola.

Joel Haskard: What initially got you interested in owning an electric vehicle?

Stuart Rauvola: I received an email from Nissan over two years ago asking me if I would be interested in placing a $99 deposit down on an all-electric vehicle. I figured, why not? I had not done any research on electric vehicles, but I knew I would own one someday. I added solar photovoltaic panels on my roof and had a ground-source heat pump installed—both within the last five years—so I thought maybe an electric vehicle would be a natural next step to carbon-neutral or net zero energy life. I did not expect the wait would be over two years, but the wait was worth it.

Stuart: 2012 Nissan Leaf. Comes with cold weather package and quick charge port. I bought it at Kline Nissan in Maplewood. They me that had an allotment of six Leafs in the initial rollout carefully orchestrated by Nissan HQ.

Joel: What has been your experience so far?

Stuart: Much better than expected. Instrumentation is an electrical engineers dream. Range of 100 miles was overstated, but I have not run it out of juice yet, so I really donlt know what the absolute range is. It fits perfectly with my drive to work and all errands. My employer is installing a 240 outlet for me to charge at work if I need to drive to job sites or meetings.

Joel: Has there been anything surprising?

Stuart: The acceleration is amazing! Ride is really good for a small car, mainly because the batteries are located under the seats and that makes the center of gravity low. It is really fun to drive. Also, when it is connected to “shore” power, you can set it to preheat or precool the cabin for 10 minutes to lessen the climate control load on the battery.

Joel: What does your family think of the car?

Stuart: I haven’t let my wife drive it yet! Shame on me!

Joel: How do you charge the car?

Stuart: I have a Level 2 charger installed in my garage, which is a 240 volt, 16 amp charger. It is actually not a charger because the charger is located in the vehicle next to the batteries—it is called an EVSE which is short for electric vehicle supply equipment. I have a web-based monitoring system that I can log the total energy used by the Leaf. I am at about 175 kWH energy consumed for 800 miles of travel, which works out to be about 4.5 miles per kWH. At $0.10/kwh, that equals 2.2 cents per mile. My 2004 Jeep runs about 20 cents per mile, so the Leaf is almost 1/10th the cost to operate than the Jeep.

Joel: Have you had any difficulty finding charging locations?

Stuart: No. They are pretty well identified on various websites like Drive Electric MN, Chargepoint.net, etc. The navigation system in the car also identifies them and can plot the shortest route to them. More locations would be better as more EV’s hit the road. I would hate to have a situation where I thought a charging station was available at the start of a long triop only to have someone else charging there once I got to my destination. We’ll see what the future holds.

Joel: Do you have any suggestions for a potential electric vehicle buyer?

Stuart: Be sure your daily driving habits align with the range of the electric car. Also, never pass up an opportunity to top off the charge.

Regarding my other home sustainable and energy saving projects, I had a 5.67 KW solar electric system installed in 2010 that is grid tied to the utility for 1:1 offset of house loads, and I have a 3 ton ground source heat pump installed in 2008 that has worked wonderfully to heat and cool our house. Estimated payback for the GSHP is 12 years and 10 for the PV system. In 2020 I will have a payback party for both systems.

Thank you! It’s fun to tell my story. Feel free to leave questions or comments below if you have any!