As he swerves with determination through the streets of south Minneapolis Sti-Lo Reel remains cool at all times.

His voice never rises to a yell even after being tailed by a heavy-handed driver in a hurry to nowhere.

“I got my name in middle school. When I first started rapping I had a whack name. I was ‘Little Man’ because I was short [laughs],” said Sti-Lo Reel.

The name changed when a female classmate was stroking his ego when she said, “Your sti-lo (style) is so real. You don’t get rattled about anything.”

Witnessing Sti-Lo’s stage show and recordings give you a bit of a different story. The North Minneapolis raised MC teeters back and forth between coolness and a ferocious verbal attack. Reel is reminiscent of a street preacher breaking down the truth to devoted followers in a language that they understand. It’s understandable why his new project “MLK (Mortify, Live, Kill)” is a fitting name.

Growing up with 12 brothers and sisters, Reel was always taught by his father to be a leader and not a follower. Recently released on Martin Luther King Day, “MLK” stands up to this concept. Sti-Lo takes a militant approach on the rapid-fire track “Us vs. Them” (featuring up and coming singer Lyriq Lashay) where he states “no meek in my world.” On other tracks such as “Calhoun Days” he tells tales of cruising the lake over smooth King Ralio production with MCs Cooly & AR Wildwolf.

The 13-track album was recently released by Pledge Empire Records, a company built by Virginia natives Prince Carlton and Ced Linus. Sti-Lo met the duo playing basketball for Mankato Bethany Lutheran College. After a short drive I sat down with him to get more information on the album and the thought process behind his work.

TW: What has your experience been like as a rapper coming from North Minneapolis?

Reel: It broadens your ability to talk about things such as what you’ve seen growing up and what you’ve been into. I’ve seen the struggle. I’ve seen what people have to do to survive in that type of environment. Moving to the suburbs broadens that even more. It gives you the ability to see a different perspective. You go from seeing your cousins carry guns and sell drugs to seeing a brighter side of life. 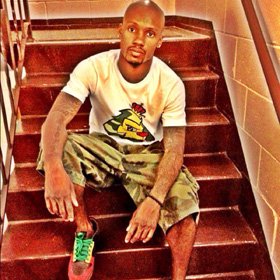 TW: What are some observations about the Twin Cities music scene and how people like you fit in?

Reel: I actually wanted to tap into this, real talk. I’ve been a lot of places. Minnesota has one of the dopest independent rap environments – so many talented artists here. People like me that have the drive and ambition that want to make something happen; I just think there’s too much isolation and tearing each other down. We don’t have a lot of camaraderie. I wish we were better in that aspect of building each other up instead of tearing each other down.

TW: How would you like to be known artistically?

Reel: As an MC, artist, poet. I think rappers are one-dimensional. I think about the Steve Harvey quote, “every time that mic is in your hand you have some responsibility.” That’s how I look at music.

Reel: My kids. People that have supported me since forever like my son’s mom ever since she’s known me. Also negativity. I’m all for criticism but when you criticize and don’t have a valid point for your criticism it frustrates me. [I’ll ask someone] why they think a song is whack. They’ll say, “y’all wasn’t talking about nothing,” when the song is talking about a lot. So what’s nothing? Nothing you want to hear?

TW: What separates you from other artists?

Reel: The courage to go where other people won’t go on a record. A lot of people are afraid to talk about God. I think people are so focused on being cool. People listen to Rick Ross and Jay-Z and they want people to see them in that aura instead of just paving your own way, or instead of just feeling you’ve got to write. You don’t have to write about cool stuff all the time because life ain’t always cool.

Reel: I don’t want to be signed to a major label. I don’t care if Roc-A-Fella or MMG signs me. I want to be independent. I want to create my own revenue to the point where I don’t have to go into a corporate office and have someone tell me what they don’t want me to say on my record.

With the amount of hard work and determination Sti-Lo Reel has shown he’s well on his way to his goal. You can catch Sti-Lo Reel performing live April 30 at Honey, 205 E. Hennepin Ave. in Minneapolis. For more information follow www.facebook.com/StiLoReel. You can also download MLK at www.sti-loreel.bandcamp.com.

(Photo courtesy of the artist)