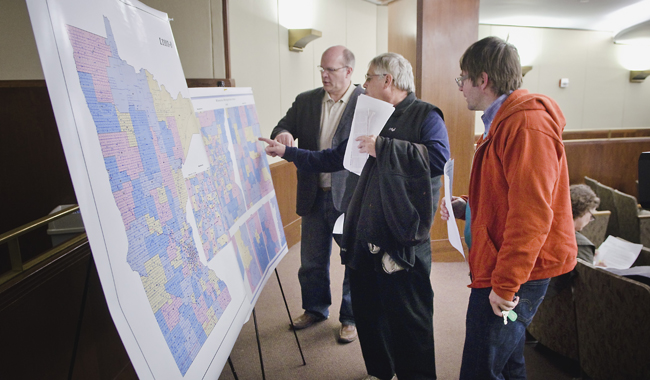 Redistricting happens every 10 years and with it comes the partisan rancor — so much so that the state has a long history of the courts completing the task of setting district boundaries because the Legislature can’t reach agreement and get approval from the governor.

Rep. Paul Marquart (DFL-Dilworth) told members of the House Redistricting Committee May 3 that he had hopes that this year would be different.

“For the first time in 100 years, we could send a message to the citizens and come up with a plan that is bipartisan and signed by the governor. In terms of long-term policy, this is probably the most important thing anyone will do this session. This is much too important to relinquish our responsibility to the courts,” he said.

The proposed House and Senate district boundaries were released May 2, and before the committee for consideration 24 hours later.

With testifier and DFL complaints of too little time for review of the maps, not enough public input, and questions over whether “communities of interest” are well-served, Marquart’s hope for eventual bipartisan support appears to be in question.

“Our goal was a fair process that recognizes the population shifts,” Anderson said. She noted there were 14 committee meetings — three in Greater Minnesota — to seek public input on the map that will shape the 2012 elections and for the next 10 years.

The proposed map reflects the state’s population migration from the rural areas to the Twin Cities metropolitan area, and the outflow from the cities’ central core — all resulting in substantial suburban and exurban growth.

The redistricting plan keeps the number of House and Senate districts the same at 134 and 67 respectively. The ideal population in each House district would be 39,582 and 79,163 for the Senate. Current numbers are 36,713 and 73,425 respectively.

The plan appears to pit 20 House incumbents against each other in the next election — DFLers in five districts squaring off; Republicans in one district and incumbents from both parties in four districts. Most of the combined districts are located in the Twin Cities metropolitan area.

The map with the new congressional lines for Minnesota’s eight districts should be available by May 23, the end of session, Anderson said.

It wasn’t long into the meeting, with more than 30 testifiers, when Anderson took offense to one person’s characterization that splitting the city of Mankato appears to be gerrymandering.

“I don’t appreciate you using that term. We didn’t do that,” she responded.

Rep. Melissa Hortman (DFL-Brooklyn Park) asked her to let the speaker finish, and the roomful of onlookers clapped, leading Anderson to pound the gavel and say, “You are out of order.”

Anderson said the new map is based on the principles accepted by the committee last week, and stated the importance of keeping local jurisdictions together. “This plan would split 42 cities versus the current 46 splits,” she said.

However, Maplewood Mayor Will Rossbach spoke to the problems his city would face if it were to be split among three House districts as proposed, instead of the current two.

“You are taking us away from our partners that we have joint powers agreements with. It is not a situation that will make it easier for us.”

“I don’t want to rush the process. It has dire implications for minority communities,” said Gerardo Bonilla, a Latino organizer in the South Minneapolis/Richfield area. “From looking at a couple of districts, the cut up is disempowering to communities that exist there. It dilutes the power of the Latino vote. This process should not be rushed.”

As DFLers called for more public review time, Republicans, including Rep. Pat Garofalo (R-Farmington), asked the DFL for their redistricting map. “Are you guys going to put out a plan? If not, fess up and say it,” he said.

Rep. Mary Murphy (DFL-Hermantown), the committee’s DFL lead, said she had hoped that the committee could develop a map that reflected all Minnesotans and would have bipartisan support. “I still feel that goal can be reached,” she said.

She complimented Anderson for the model that she had developed and for giving them something to respond to. “I feel that we should take the time to continue to develop a plan from this committee to bring to the floor and ask for votes from both parties and pass with a significant number of votes.”