Noted child therapist and Pan-Africanist, Dr. Umar Johnson was scheduled to talk at 6 p.m. at the Minneapolis Urban League, but his lecture did not begin until about 6:45 p.m.

The late start was not Johnson’s fault. The room inside the lower level of the Urban League was set to seat maybe 150 people – an impressive number – yet double that showed up. Once the organizers were able to accommodate the overflow crowd Johnson got down to business … the business of saving African-American children from what he said are racist policies in America’s schools designed to miseducate, mistreat, misdiagnose and mislabel children of color.

“I’m not a member of the Black bourgeoisie so I’m not going to explain away racism, I’m going to deal with it head on. The new racism is to act like there is none,” said Johnson. “I’m seeing teachers sending me kids who they say are retarded or learning disabled and I say no they’re not, they’re just not being educated properly.” 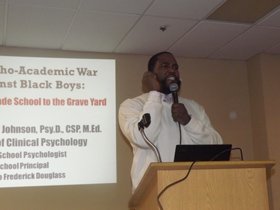 While Johnson stopped short of calling for a separatist solution to the problems facing African-Americans – though he proudly proclaimed to be a follower of Marcus Garvey, the Jamaican Pan-Africanist who organized the early 1900’s return to Africa movement– Johnson did say most schools do not have the best interest of African-American children at heart. He said though schools are integrated, they are segregated in how they educate children of color.

“As a part of the mis-education of our children, there’s something called special education. I don’t know what so special about it,” said Johnson.

Johnson said our children … boys in particular, are being labeled as special needs children and being forced into remedial classes and more disturbing, being placed on heavy psychotic drugs that have devastating side effects.

“Special education went from being a program to being a for profit business,” said Johnson, who said schools receive extra government funding for the number of students assigned to special education classes and drug companies benefit from children being prescribed behavioral medications. “A teacher is a teacher and some of them can’t even do that well. How in the hell are you going to give a medical health diagnosis? That’s practicing outside of your profession. The next time some teacher tries to diagnose your child with a medical condition, you write the state board and tell them that teacher is practicing medicine without a license.” 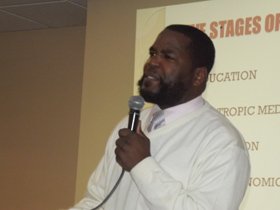 A certified school physiologist, Johnson warned parents to never allow educators, and ultimately medical practitioners to prescribe drugs such as Ritalin to children.

“Ritalin is the most prescribed drug in the nation to treat ADHD (attention deficit hyperactivity disorder) and Ritalin is a Schedule 2 drug. That means it is just as addictive as cocaine or opium,” said Johnson.

Johnson said educators are getting away with mislabeling children because many score average on most portions of IQ tests – test that supposedly determine a person’s intelligence – but score below average on verbal skills. He said every portion of the tests is universal except the verbal, which is reflective of a white, middle-class existence.

“Verbal IQ measures words definitions and concepts that white people use,” said Johnson. “If a Black person does not grow up in a middle class life, he (or she) will not do well on this test. That is a cultural bias and these kids are being diagnosed as mentally retarded because of cultural bias.” 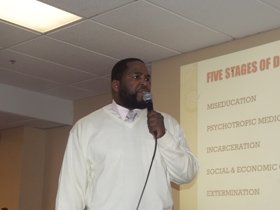 “You never tell a child that they have a learning disability. By doing that you create an invisible glass ceiling that becomes a self-fulfilling prophecy,” said Johnson.

In a talk that lasted more than an hour and touched on Johnson’s disdain for the Black church, interracial dating, self-love, education and economic stability, many in the audience were visibly moved – some to tears. Johnson asked that African-Americans not continue to be cast aside.

“Don’t give up on us,” said Johnson. “I know we’re not looking too good right now, but give us a chance.”

Johnson was invited to the Twin Cities by KMOJ and was hosted by the Minneapolis Urban League.