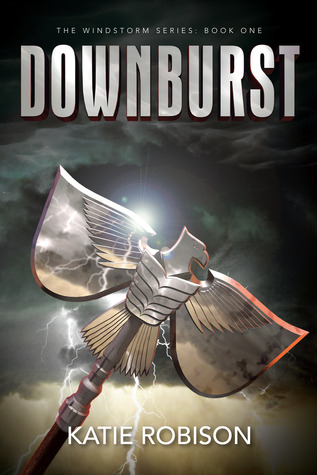 Due to my “year of genre” (which has been a teensy bit compromised by my decision to just skip the western month and say shoo to Lonesome Dove in favor of…well…taking a break from reading) I haven’t had the chance to review many books for Lit Lyfe over the past few months. However, that’s about to change. Recently, I received an email from local author and Ph.D. candidate Katie Robison about her new book Downburst, a young adult dystopian fantasy-thriller based on Native American legends, which is the first in something called the Windstorm Series. The cover depicts what looked to me at first to be a bird clutching a weapon of some sort, leading me to suppose the book was a neat little Hunger Games rip-off, I understand now that the illustration, and the book, is something else entirely.

Set in Canada, Downburst stars Kit, a disaffected runaway living on scraps in the city of Winnipeg, dodging members of the nefarious Shredders gang, and selling fake IDs to get by. This line of work leads her to do business with a young girl name Aura who happens to looks exactly like Kit, but “cleaner.”

After the cops crash her place of business and Kit is displaced again, she seeks refuge at a train yard and spots her doppelganger having a run-in with men who appear to be Shredders, but sport tattoos that the gang members aren’t known for. Aura is murdered as Kit watches and tries not to make a sound. Shortly after, while wandering the crime scene in a stupor Kit is kidnapped by a man who believes her to be Aura, and her life is further turned upside down as she is taken to a summer camp for deep in the wilderness of Canada.

Soon, Kit learns that Aura was no ordinary teenage girl, she belonged to a tribe of Windwalkers—direct descendants of the First Parents who can ride the wind—and was headed to camp to hone her skills in battle and find her place among her people. Kit has always had trouble fitting in, and now she must try to not only fit in with three hundred other teens, but also fit with a people who are not her own, or be branded a spy and killed.

If at first I was dubious about the merit of the story, having completed in the book in a day of solid reading I am certain that this book is totally awesome. Kit is a completely relatable character who is kind of always scared, but always looking to do the right thing, even if she goes about it in awkward ways. One of the most real parts about her is her habit of creating nicknames for people whose names she (and therefore the reader) doesn’t yet know, based on their actions or appearance.

By the end of the book, I was so swept up in the action, and Kit’s newfound skills, friends, and life that I forgot that Downburst was the first in a series, and was pretty bummed when the book ended and I was left with a whopper of a cliffhanger. I can only hop that Robison finds her audience with this self-published series and continues on. I have to know what becomes of Kit and her fight for survival.

(On a serendipitous note, looking at Robison’s website, July is apparently “Downburst season,” and the book can be bought for $2.99 on Amazon all month.)