Hip-hop pioneer Doug E. Fresh did everything he could to live up to his self-proclaimed moniker, “World’s Greatest Entertainer” when he recently performed at the Cabooze.

For starters, it should be noted that “The Show” artist performed a concert earlier that day for the Delta Sigma Theta Sorority, Inc.’s Centennial Celebration in Washington, D.C. That could explain why he didn’t take the stage in Minneapolis until some time past midnight. But once Doug E. (or Dougie depending upon which of his many songs that he spells out his name in) did hit the stage, it was a wrap.

There was no easing into the set. Doug E. got right down to business. And some of these young up-and-coming artists (or in some cases, so-called artists) should have been on the side of the stage taking notes on how to entertain. The “old man’s” energy level started at 10 and culminated at wow.

There wasn’t a lot of talking in between songs – actually, it was mostly Doug beatboxing between his hits, as he reminded the crowd that he was one of the inventors of the art form. Doug also reminded the late arriving, but packed Cabooze, that he invented something else too … the now infamous “Dougie” dance, made popular by the Cali Swag District song, “Teach Me How to Dougie.” 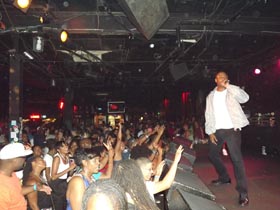 Doug E. performed for about 45 minutes, but two songs summed up the night.

Right: Doug E. Fresh rocks “The Show” for a packed house at the Cabooze. (Photo by Harry Colbert, Jr.)

On the studio version of the hip-hop classic “La Di Da Di,” Fresh leaves the rapping to the ultra-smooth Slick Rick, as Doug beatboxes throughout the song. No other accompaniment is used – or needed. Well without Rick to front the song, Doug left that job to the audience, who of course, knew every word.

But it was another song that wasn’t really a song that tells how great of a performer this man is.

In a performer rehearsed, but audience impromptu, Doug shouted out lyrical prompts and the crowd – in unison – offered the correct corresponding lyrics to a rhyme that I’m sure most had never heard before, as it does not appear on any studio recording.

Now that’s how to rock a show.

Doug’s show was so nice I forgot about the long wait.

Another of the evening’s highlights was the opening act, Lioness. This emcee is the truth. Her rhymes are fierce and her delivery is flawless. There’s also something to be said about being able to clearly decipher every word that flows out of a true lyricist’s mouth. I look forward to hearing more from her. Bravo.

All in all, what a great night for hip-hop.