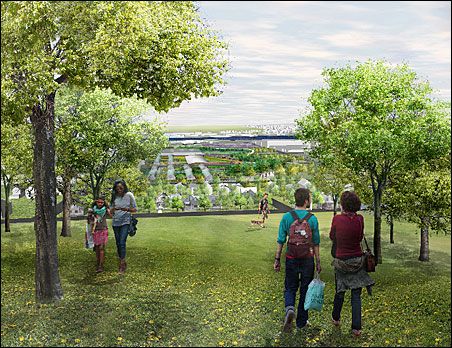 (Just to be sure this point doesn’t get missed: Take the MRDI survey and tell them how important a land bridge is.)

Letters of support for the Mississippi Riverfront Design Initiative have been pouring in. However, several entities seem already to be dismissing the most innovative, groundbreaking aspect of the proposal: The Farview Land Bridge. The Above the Falls Citizens’ Advisory Committee (AFCAC) states:

“We believe that the Farview Land Bridge provides a bold new connection that was not envisioned in the Above the Falls Plan, and we support this concept of a connection to the river for Minneapolis neighborhoods in North Minneapolis, which are disconnected from the river by I-94, railroads, and existing development. However, we wonder if the current proposal is too large, and suggest two smaller land bridges (the 2nd one being at 34th Avenue to connect Perkins Hill Park and Cityview School to the river), an example of this concept is the “River Terrace Pedestrian Deck and Grand Stair” described on page 80 of the Above the Falls Plan.”

But at least AFCAC is somewhat supportive, even in their premature dismissal. Friends of the Mississippi (FMR) takes a more direct approach in writing off the land bridge before it can even be initially explored as an option…

“FMR is very supportive of taking steps to better connect the north side to the river and parks. We love the idea of a land bridge, but we feel that, the way this bridge is conceived, the cost would very likely be prohibitive in general, and much too costly relative to the many other needs in the Above the Falls Plan. Even if we could find the tens of millions of dollars to build it, there are many other park projects that could be done to improve the park and connect north side residents, possibly with much greater impact per dollar spent.

“We would like to see a range of alternatives for connecting north Minneapolis to the river with a comparison of costs and benefits. One concept that might be more cost effective is a bridge between Lowry and Dowling, where the ATF Plan suggests a new crossing. This section includes a longer stretch between existing freeway crossings, and it would connect to a city-owed river location that is poised to become park much sooner than the heavy industrial area south of Lowry. A cost estimate for building a land bridge was included in the Upper Harbor Terminal Redevelopment Study. Other options that should be considered are adding one or more pedestrian crossings and/or doing some greening and traffic calming design measures for the freeway bridges and approaches between Lyndale and the river (Plymouth, Broadway, Lowry, Dowling). Particularly compelling among these is a strengthening of the Broadway Avenue corridor just south of the proposed land bridge. Much community energy and focus has gone into the West Broadway Alive! plan over the last five years, and focusing on improving this existing corridor – perhaps with a redesign of the Broadway Bridge and surroundings to make it less intimidating for pedestrians – might be a worthwhile alternative.

“In general, we think there should be less emphasis on creating one grand connection, and more emphasis on adding pedestrian bridges over I-94 where needed, and strengthening existing connections through design-conscious zoning. Even where connections exist, the fabric of the east side of I-94 was rarely designed to be hospitable to bicyclists and particularly pedestrians. A variety of uses – including industrial, commercial, and residential – can be designed to be set back only minimally from the street, with windows, materials and other treatments that enliven the streetscape. A rigorous design focus on selected east-west connectors would do much to encourage increased travel between the heart of North Minneapolis and the Mississippi riverfront.

“We do like the elevated walkway concept along the river included in the Farview connector plan and would support the idea of finding a way for trails to connect while barging continues. The Quad Cities has some examples of this on the Illinois side. Getting trails and a parkway through this section of the ATF plan will be very challenging and we appreciate the creativity put into this concept.”

I’ve lived near pedestrian bridges over interstates. By and large, pedestrians don’t use them. Going for small change like a slightly greener 26th Avenue over 94 will do virtually nothing to connect north Minneapolis to the Mississippi River. You’ll still hear the overwhelming, droning whine of cars whizzing by as you gingerly make your way to…what, exactly? More industrial parks that still provide the fundamental disconnect between residents and the Mississippi, most likely. In order to create a truly transformative connection to the Mississippi River, there must be no disconnect whatsoever dividing the community and the riverfront.

The land bridge is bold, big, and yes, it will be expensive. Putting together the funding won’t be easy or quick. But with the land bridge in place, plenty of other development will certainly follow. Without it, the MRDI proposals amount to little more than a local connection to “Peanuts” – just like when Lucy promises that this time she’s REALLY going to let Charlie Brown kick the ball. North Minneapolis residents will have come to yet another series of community events, where shiny new architectural daydreams are presented. But this time…oh, THIS TIME they must really mean it. And so we get excited, rush towards that design proposal, only to have it whisked away at the last moment.

Don’t worry, the next pretty picture will be real. They promise.