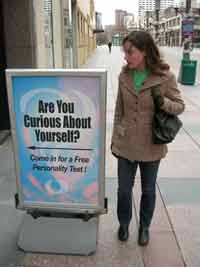 I have walked by the Church of Scientology storefront on Nicollet Mall for many years, and have long been curious about what goes on in there. I don’t know anything about Scientology, except that lots of Hollywood types are fervent subscribers. I suspect that I am not alone in assuming that there might be something a little cultish about this particular cosmology. Of course, this assumption is based on an almost complete lack of knowledge about what Scientology is.

Even though the “church” posts a welcoming sign inviting anyone to come inside for a “Free Personality Test!”, I never felt like this is something I would actually do. I suspected that the test was merely a ruse to get unsuspecting people through the door, at which point the resident Scientologists would begin hard-selling box sets of inspirational L. Ron Hubbard textbooks and insisting that you “sign up” to join the religion. In the spirit of this column, I had to go check it out.

I arrived on a sunny Saturday afternoon, filled with trepidation at the idea of even walking inside the building. I brushed aside my irrational fear and marched in, trying to project a confident, good-personality air. “Those Scientologists are probably just as intimidated as you are,” I coached myself in passive-aggressive ex-Catholic fashion. “Under no circumstances do you need to write this organization a $200 check, even if they demand it.”

I was immediately greeted in the lobby by “Wade,” my test administrator. “Hello, I, uh, kind of was thinking I might like to maybe take that test,” I blathered, my cool façade shattering. A man of few words, Wade led me over to a conference table and handed me the Oxford Capacity Analysis™ — a booklet of questions and an answer sheet. Without any further explanation, he returned to the reception desk.

I took this opportunity to soak in my surroundings. The Nicollet Ave. branch of the Church of Scientology is very similar in style to your average accounting office. A reception desk outfitted with ancient tan computers greets you when you enter. A bank of bookcases lines the left wall, filled with, I assume, Scientology literature. The cover art for many of these books has a definite sci-fi vibe. The walls are grey and the ceilings are high. Two cubicles (also grey) are set up near my conference table. I notice a lone coffee pot in the middle of a folding table in a dim hallway. I deduce that Scientologists must not feel the need to make the sweeping architectural statements of ceremony-based religions. St. Mark’s Episcopal Cathedral this was not.

The time had come to take the test. There were 200 questions, which could be answered with “yes,” “no” or “maybe.” I made the decision to answer the questions truthfully—I would not try to portray myself as “better” than I actually am, nor would I try to come across as a sociopath for laughs. So, when a question asked something like, “Do you purposely avoid responsibility at your place of employment?” I had to answer yes.

Much of the time, it was quite clear what the various questions were getting at. “Do other people plot against you in an attempt to sabotage you?” is obviously their question to weed out the paranoids. But sometimes people do plot against me… I felt a sinking sensation as I realized my truthful answers were probably going to result in a “score” that made me look like a pathological loser.

There were a few laughs to be had over some grammatically mangled questions—several read as if they’d been translated from Spanish by a computer. And I didn’t know what to make of the question that described a misbehaving 10-year-old child and then asked whether or not I would use corporal punishment in an attempt to control “it.” The test instructions allowed for writing “impressions” on the back of the answer sheet, but I didn’t want to open that can of worms.

Half an hour later, I finished the test and gave my answer sheet to Wade. He sat down at one of the tan computers and data-entered my answers into a program. The answers were somehow transformed into a line on a graph, which pinpointed the quality of my personality on points such as “stable/unstable,” “composed/nervous,” and “responsible/irresponsible.” He printed out that graph for me, but it was hard to read, due to very low levels of toner in the printer. He went off to find “Diane” who would explain what the graph meant.

Diane sat down with my in front of the computer to go over my results. This basically amounted to her confirming what I could (barely) read on the graph. First, I will try to describe the graph itself. Along the horizontal axis is a list of personality characteristics. The positive characteristics are listed on the top of the graph, and the negative ones on the bottom. The vertical axis contains numbers, from 0 to 200. Basically, the test results are mysteriously transformed into a point on the graph, which tells you how you stack up, personality-wise. For example, my best score, +60 on the stable/unstable line, means that I’m…more stable that unstable?

Diane pointed out my positive personality traits (my scores for “stable,” “certainty” and “aggressive” were all the “desirable state” area. I am normal when it comes to my balance of “composed/nervous,” “active/inactive,” and “correct estimation/critical.” But then there is the stuff in the “unacceptable state” zone. My “scores” indicated that I am “depressed,” “irresponsible,” have a “lack of accord” and am “withdrawn.” These scores all fall “below the broken line” indicating that “attention [is] urgent.”

I could tell my results weren’t good, but I maintained my composure. “Wow, my score is really bad over here,” I commented, pointing at the part of the graph that states that I am withdrawn and can’t communicate with anyone. “What do you make of that?” Diane hemmed and hawed, telling me that my scores indicate that I’m not “connecting” with people in my life and that something is holding me back and keeping me from opening up to people. As for the damning “withdrawn” diagnosis, I happily report to Diane that the test is right on—“I am withdrawn,” I tell her. “I think it’s fine, but most people think it’s really negative.” Diane does not disagree.

As for my problem with communication, Diane seems a little flustered when she admits that I’m communicating just fine with her (apparently, my abysmal score suggests that I’m a drooling mute). She also doesn’t seem to believe me when I inform her that I’ve never taken a personality or IQ test before. She says she doesn’t understand how this could be possible. “Doesn’t everyone have to take them in school?” she asked. “Didn’t you take the Myers-Briggs in college?”

I also asked Diane some leading questions about Scientology. “What can I do about my scores on this test? Can Scientology help?” Diane was very evasive; she did not suggest that Scientology might be helpful for me. I pressed on about their reasons for offering the test. “Is it because Scientology is about self-improvement?” Diane states that the test is a “service to the public,” and won’t say anything. I had gone in afraid that they were going to foist religion on me, and here I was, unable to get any general comments about Scientology. I suspect that my score on the test was poor enough to get me rejected from the Scientology applicant pool. So while I can’t really knock taking the Scientology personality test, it would appear the Scientologists have knocked allowing me into their cult (or whatever it is).