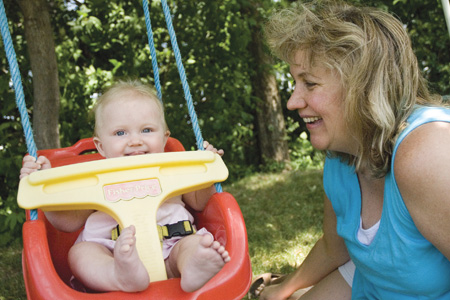 When Beth Harrington of Minneapolis gave birth to a son 10 years ago, she did not know much about his father, an anonymous sperm donor. She had only basic information, such as his age, ethnicity, education, physical characteristics and family medical history.

Since then, things have changed a lot in the donor industry. Increasing numbers of single women and lesbian couples are using reproductive technology to conceive and are openly talking to kids about their origins. That openness has lead to greater curiosity about the donor as a person, leading some children connect with half-siblings and even form open relationships with their fathers.

As a result, the industry is rapidly evolving to accommodate families who see the donor as more than simply the provider of a product. Many of the country’s 26 major sperm banks now offer extensive donor profiles, including essays, childhood photos and even staff impressions of the man. Some actively recruit donors who agree to be contacted after a child turns 18.

“I’m envious about all the information available now,” Harrington said. “It’s exploded in the last decade.”

After Harrington’s son learned that his donor is part-Russian, he wanted to learn more about that culture as a reflection of himself. He is a creative and outspoken boy, Harrington said, who is “9 going on 14,” and has told his mother, “of course I would want to meet my donor.”

A culture of silence
It wasn’t long ago that the prevailing wisdom for families using donors was “don’t tell.” Many still adhere to that policy. Studies indicate that perhaps 80 percent of married couples who choose insemination do not tell their children that one (or both) parents are not biologically related to them.

Sometimes parents are embarrassed or ashamed about infertility, or they fear their relationship with the child will suffer or that other family members will reject the child.

In contrast, “nearly 100 percent” of children raised by lesbian couples and singles are told about the way they were conceived, according to Dr. Cappy Rothman, director of California Cryobank, one of the world’s largest sperm banks. Single women and lesbian couples now make up half of his bank’s clientele, which ships about 2,500 vials of sperm each month. He estimates that his bank alone has been responsible for 75,000 children over the years.

With the greater openness comes challenges. The industry is grappling with the issue of how open is too open? And it’s struggling to keep up with changing needs and conflicting desires of very different types of donors and families.

Too much or too little
Some donors are curious about their offspring; others have no interest and want no contact. Some parents want their child to be able to fill in missing pieces about their genetic history; others feel family is a social definition and consider donors little more than vendors.

Many parents welcome information, but then they don’t quite know what to do with it. It took one father three years to listen to the recorded voice of his children’s sperm donor; he said he felt threatened by the prospect of contact between them.

Some children have little curiosity about unknown roots; others range from intrigued to obsessed about understanding missing pieces of their personal puzzle. Caught in the middle are offspring who sometimes want greater access to information than parents, donor banks or donors are comfortable giving.

One teenage boy used DNA testing and Internet sleuthing to track down his donor’s identity. Another teen, told at age 15 that she was conceived from donor sperm, had her cell phone and computer privileges rescinded after she made contact with a half-sibling.

At the center of these issues is the question of how family is defined and who defines it.

Family boundaries
Donor families can now register their child on voluntary registries to help track half-siblings conceived from the same donor. Some donor programs offer their own listings. The only national listing is DonorSiblingRegistry.com, founded by Wendy Kramer and her donor-conceived son. The Denver-based registry has enabled nearly 2,500 matches and has grown to nearly 8,000 members since 2002.

Teresa Boyer, 36, of Shoreview, embraces the idea of contact with families of her 2-year-old son’s half-siblings. She feels reassured that she knows who most of them are and where they live. She has somewhat regular contact with mothers of five of her son’s 11 half-siblings. All of the children, including a set of twins, are under the age of three. When her son is old enough, she will let him decide if he wants to make contact.

Ramona Roller, 38, of Farmington, is a typical sperm bank candidate. A gregarious, no-nonsense woman, she decided she wanted a baby even though she hadn’t found the right partner. Her clinic worked with the local sperm bank, Cryogenic Laboratories, which offered her a choice of 130 donors.

“It was a little depressing,” she said. “I never thought I’d be shopping for my baby’s father online.”

Roller’s daughter was born in December 2005. In hindsight, she said, she wished she had used a sperm bank outside of Minnesota to reduce the number of half-siblings living in the same geographic area. Until she read a New York Times article about five half-siblings in Denver who sought each other out, she said, it had never occurred to her that unknown relatives would live in the same area. “That could get a little scary,” she said.

It is the unknowns of the donor business that are fueling a push toward greater oversight of the self-regulated industry.

Paul DiLascia, who manages SpermCenter.com, a website that tracks the profiles of U.S. donors on a monthly basis, suspects that some donors have produced at least 60 offspring. Most media report 30,000 sperm donor babies born each year, but that number is 20 years old, DiLascia notes, adding that at least one sperm bank claims today that number is 50,000.

Kramer has similar suspicions. On her website, there’s one example where 33 half-siblings were conceived from one donor. That number includes only the children whose families have registered. There are undoubtedly more children whose parents have no interest in making contact or who have not learned about the website.

Each donor program has its own policy. However, many families do not report after birth, making it difficult for programs to keep track of the numbers.

In the coming years, the industry will be coming under greater scrutiny. The American Association of Tissue Banks, which accredits sperm and egg banks, intends to discuss issues of regulation in September.

Mikki Morrissette, author of Choosing Single Motherhood, is writing a book about the donor insemination industry.