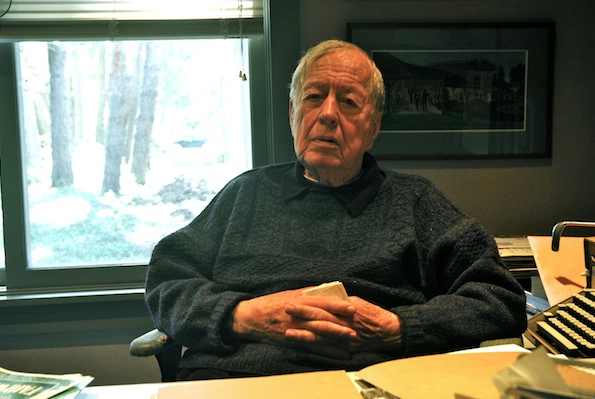 Here’s to the great Don Stolz, who passed away over the weekend at the age of 97. The long-reigning king of commercial theater in Minnesota, Stolz proved that you don’t have to go non-profit to have a viable theater venue.

I had the opportunity to meet Don Stolz a couple of times and interviewed him for my Minnesota Theater History Project. The recordings of those interviews can be found here, as well as a bibliography of texts about the theater. For more on Stolz’s life, check out pieces written about him in The Star Tribune and The Pioneer Press.

Stolz wasn’t the founder of The Old Log Theater, but he owned it for nearly 70 years. He worked for the company in its first season in 1941 before going off to fight in World War II. When he returned, after a brief stint in Los Angeles, he bought the theater from its former owner, Bob Aden, for $1.

When the Guthrie set up shop in the early 1960s, it brought promise to be the touchstone theater of Minnesota. Indeed the Guthrie’s presence was to transform the state’s art scene, but its effect didn’t diminish the Old Log’s popularity.

Today there are hundreds of nonprofit theaters in the Twin Cities and around the state, owing in part to Minnesota’s rich tapestry of foundation grants and public dollars dedicated to the arts. While all that enriches our state to being a great place to live, there’s also something to be said for companies that keep churning based on ticket sales, whose strength comes from giving audiences what they want, rather than what the artists think they need. Sure, it’s capitalism, but it also relies on populist appeal.

The Old Log went from putting on new plays every week to lengthening show runs for longer periods of time as audiences drove up to the theater from the Twin Cities and surrounding suburbs. As for Stolz, he spent a lifetime in the theater, touching people through the art of entertainment.