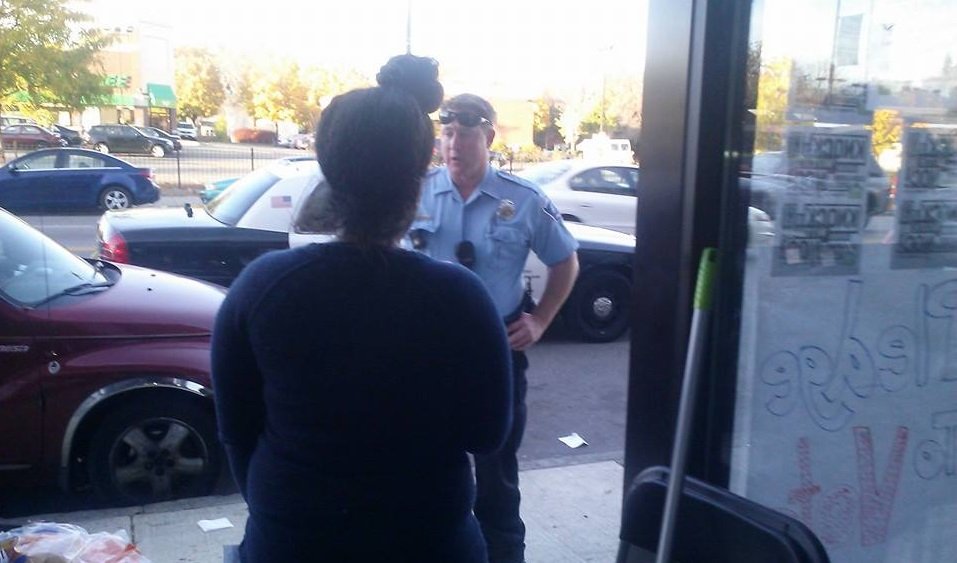 (Photo courtesty of Neighborhoods Organizing for Change) A Minneapolis police officer shows up at NOC's office on West Broadway.

With less than three weeks to go until the Nov. 4 election, Minneapolis school board candidate Don Samuels may have gotten himself in some hot water with a local Northside philanthropic nonprofit.

According to a YouTube video and sources from the North Minneapolis-based group NOC (Neighborhoods Organizing for Change), Samuels called the Minneapolis police on Thursday, Oct. 16, asking them to investigate “hot dog sales” in front of NOC’s offices on West Broadway Avenue.

In the video, a Minneapolis police officer can be seen questioning NOC representatives Mike Griffin and Wintana Melekin, who were stationed in front of NOC’s front door. When the officer asks whether NOC is selling the hot dogs in an attempt to “elicit votes,” Griffin insists they were simply handing out hot dogs for free and asking people to pledge to vote on Nov. 4. Griffin tells the officer that the event is a “non-partisan, non-profit” one.

Soliciting votes on behalf of any one candidate would be a violation of NOC’s 501c4 nonprofit status.

Griffin and Melekin then ask the officer for confirmation that it was indeed Samuels who called the police, and the officer says again that the candidate called and asked them to check on a “black male wearing a black hat, selling hot dogs.”

While NOC executive director Anthony Newby is concerned the incident was an attempt to disrupt his organization’s Get Out the Vote drive, Samuels insists he had no such intentions. In an email, Samuels said he called the police because he was concerned he had witnessed illegal food sales taking place, which he says has been a “problem in our community before.” Samuels also said he is a supporter of NOC and recently helped them doorknock in North Minneapolis.

“We had a huge sign in our window saying ‘Free Hot Dogs,’ and we were right in front of the NOC office,” she said. “It seems completely impossible for Samuels to think that we were illegally selling food. He’s been to NOC before, and he could have reached out to any one of us, or called or texted Anthony to find out what we were doing.”

Melekin expressed frustration with the whole situation, saying she feels police are using such allegations of what she called “live-ability crimes,” such as jaywalking or selling food, to interrupt attempts to encourage community members to vote.

She linked the incident to voter suppression, saying, “The assumption in North Minneapolis is, we’re selling food, when actually, we just want to vote.”

Correction: A previous version of this article incorrectly stated that Neighborhoods Organizing for Change (NOC) is a 501c3 organization. NOC is a 501c4 organization, but is focusing on a non-partisan Get Out the Vote effort in 2014.