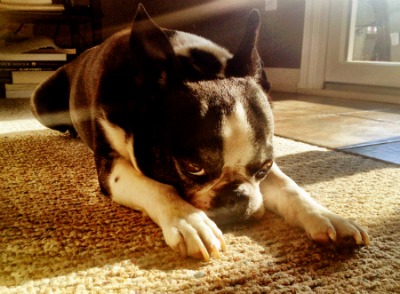 As I walked into the bedroom, I immediately saw the evidence on the carpet. Tufts of cotton were strewn about haphazardly and a multicolored jester-style ball, stiff with years of gnawing and love, lay deflated in the middle of the fluffy carnage.

Minutes before, when I’d heard the victory squeak of our 9-year-old Boston Terrier finding a toy’s sweet spot, I assumed it came from a new sunshine plush he’d brought home from a visit to a friend’s house. But on viewing the stuffing fallout, it was clear he had finally been able to exploit a rip in a homely ball that had come with him when we adopted him three winters ago.

J.B.’s tendencies toward toy destruction are nothing new, and this one, which looked like a furry soccer ball with nipples that had run a Mardi Gras gauntlet, was never the cutest toy in the bunch. But this particular bestie mauling brought up some surprising dog-mama memories for me of when we picked up our curmudgeonly charge from Midwest Animal Rescue Services (MARS) in a suburban office park.

That morning, as we clumsily organized him, his kennel, a blanket and the now-defunct ball into my trusty Subaru, J.B. wrinkled his brow in exasperation. He softly grumbled and, well, growled at us. We were new dog-parents and didn’t exactly know what we were doing. But the Petfinder.com posting that led me to him said he needed a home with no kids, cats or other dogs. We’d fallen in love with a friend’s Boston before. So J.B. seemed like the perfect little guy for us, even if he came with a few issues. Who among us doesn’t, right?

I smiled at my husband in an attempt to assure us both that this was Definitely a Good Decision™. But in the hustle of the pup-and-accoutrements exchange, I spaced on asking the one question that people would ask me every time they met him for years to come: “What does J.B. stand for?” I had no idea, but there J.B. was (it could stand for James Brown, Jim Beam, Justin Bieber, Jelly Bean…new ideas are always welcome). He sat huddled on my lap, looking peevish and put-out even though we had just technically “rescued” him. But as we pulled out of the parking lot, I decided I respected his surly skepticism.

Video of J.B. getting his first post-adoption bath in his new home.

Along with his attitude, the abominable ball came as part of the J.B. deal. The toy was distinctly unattractive, but I kept it around, hoping the familiar scent would help him acclimate. It didn’t even have the people-entertainment value some of his other toys did. We much preferred the squeaky bottle of Chardonnay with the wink-wink “Kennel Relaxin’” label or the cartoonish rubber steak branded “PRIME”. But, even if thanks only to its longevity, the ball was always his favorite.

Like all dog toys do, this one sometimes pulled a disappearing act, giving me false hope it was gone for good. Yet every time we unearthed the dusty sphere from behind the couch or under the bed, I couldn’t ignore J.B.’s unbridled happiness. “Hey, buddy, where have you been, man!?” his bugged-out eyes and snaggle-toothed grin said. He would arch his back and do a few twisty, Sea World dolphin leaps to celebrate finding loved items once thought lost.

So I was surprised I was so sorry when the ball finally met its end. For J.B.’s part, he seems to be taking the loss in stride. In fact, he’s snuggled beside me now, perfecting his sonorous Boston Terrier snore. If you’ve never heard it, just imagine Tibetan throat singing, only with less words and more volume.

Actually, the toy’s demise turned out to be a bit of a gift. It triggered memories of the time when I thought my husband and I couldn’t possibly have a dog; that we traveled too much, worked too many hours, or weren’t sure we were “dog people”. Still, some part of me pressed forward and chose J.B. anyway. We took him in, attitude, ugly ball and all. And at some unidentifiable point along the way, our lives changed around J.B. and we went from not being sure we were dog people to getting attached to the homely toys he brought with him when he first became ours.

I knew that a stitch-up job, like the countless others I’d done on the ball before, wouldn’t hack it this time. I woke J.B. up and gave him a kiss on his silky forehead. He growled at me, affectionately. And I said the magic words: “Wanna go for a ride—and pick out a new toy?”