Do cities have a “failure of frontage?” I credit Dan Parolek of Opticos Design for coining the term. When I was researching my post on form-based codes in the Bay Area, Dan explained he believes cities everywhere have a failure of frontage, that we focus so much on other elements of urbanism that we overlook the basics. We worry about shape, height, bulk, ever-evil DENSITY, parking and traffic problems, but we fail to do the simple thing and make the building engaging to the pedestrian. We have a failure of frontage, and it’s not unique to Minneapolis.

A recent post of mine at Streets.mn about urbanism in Uptown in Minneapolis elicited a response that gets at what I believe is the core of the problem. The commenter stated that the City of Minneapolis has sufficient heft in its zoning code to create good urbanism. I disagree. In the Building and Placement page of the Site Plan Review section of the Minneapolis zoning code, under Building Design, it reads “Blank, uninterrupted walls that do not include windows, entries, recesses or projections, or other architectural elements, shall not exceed twenty-five (25) feet in length”. The result is according to the code a building frontage can look like this: 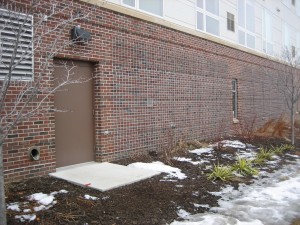 Is this good enough? I for one think not, and I suspect Minneapolis isn’t the only city struggling with this.

The example shown is a residential building near the University of Minnesota, a heavily pedestrian-focused part of the city. While the front of the building is much more appealing, this side of the building still “fronts” on a prominent street and looks like this. I presume parking is behind this wall, but I don’t care. I also don’t care whether this is near campus or some other neighborhood. We the people of the city should require something better, like this example below, where residential units front on Lake Street at West River Commons. 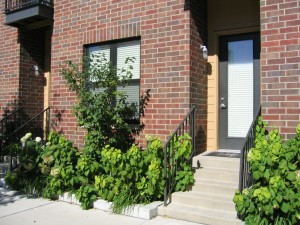 Simply bringing a building up to the sidewalk isn’t enough. Big blank walls don’t cut it. Even windows aren’t enough (although they help). The problem isn’t isolated – a number of new apartment buildings are being built, especially near campus, that have what are in theory appropriate setbacks and good urban form. But a closer inspection (i.e., walking past them) reveals the the urbanism is coming up short. The problem is a failure of frontage, and it actually sets the city back when we should be moving forward. Simply requiring ground floor units to have doors and exits to the street (that’s why the sidewalks exist in the first place).

The intent of the Minneapolis zoning code is good, but doesn’t do enough. Even the Pedestrian Overlay doesn’t help much, requiring 40% of frontage to be windows or doors with transparency, and that’s just for nonresidential uses. Yes, the city essentially requires every property to have a front door and tries to reduce the scale, but what cities need is to follow Jan Gehl’s rule of thumb from his book “Cities for People,” whereas in order to have a “friendly” street, there must be at least 10 doors per 100 meters (just over 300 feet) of frontage. To be “active, you must have at least 15 doors per 100 meters. Even my low-density street with just single-family homes is a shade shy of “friendly.”

Metric or not, Copenhagen or Minneapolis, it doesn’t matter where you are, friendly is friendly. Active is active. “Gehl’s rule” applies anywhere. Windows or doors aren’t enough. Streets need more doors, plain and simple, be they retail or residential. With a requirement of doors or windows every 25 feet, according to Gehl’s standard, the City of Minneapolis mandates its streets will be, at minimum, “boring.” We say we want friendly, but we allow boring. Is this good enough for a city that claims to want to be world class? The process should be not only requiring friendly streets (more doors), but actively encouraging it. Our development process should begin with the building frontage (all of them) and then worry about density, use and parking. Require friendly or active frontages and the rest will more easily fall in to place. We should require more West River Commons, not hope they come along and win the density fight against NIMBYs.

We have a failure of frontage and cities need to address it.

A different example is the new Target Plaza Commons in the old Let it Be Records space at 10th and Nicollet in Minneapolis. 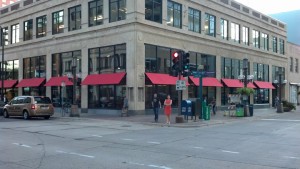 Target opened their employee meeting and fitness center last year (above) in a building that used to house Let it Be Records, Key’s Cafe and Sawatdee, three doors I used to use (there were more doorways as well). Hell, I used to leave Let it Be Records and just stand in the covered entryway because it was a good urban space; shabby and all, it had life. See below for a friendly urban street. 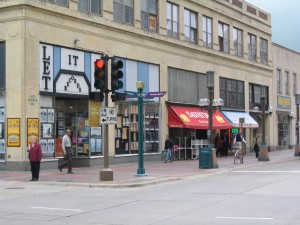 Target took a “friendly” street and made it “boring,” and the city allowed it. Yes, the building sat largely vacant for seven years, is in better condition now, and we can quibble about whether that stretch of frontage should be privatized to this degree. But you have to admit, three or more doors is better than one, and I can’t accept that fewer doors on the city’s primary pedestrian street (or any street) is progress. Could the city have at least insisted that Target retain the old Let it Be corner entrance with the covered entryway? What should have been done was to carve a couple small storefronts carved out of the corner of the building to make the street more active – Target could have the rest.

We as citizens need to expect more from our urbanism. This last example (below – by Mariko Reed) from Thin Flats in Philadelphia is striking in style but stays true to a walkable pattern of doors on the street, making for good urbanism that is timeless in that city and others. How can a city be walkable if buildings don’t have doors? 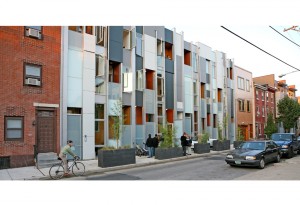 So yes, there is a failure of frontage, and yes I do believe the solution may be as simple as “Gehl’s rule” of urban doors. We just need more doors facing the street. It seems like if we get this simple bit right good urbanism will flow more easily. Am I wrong about this?