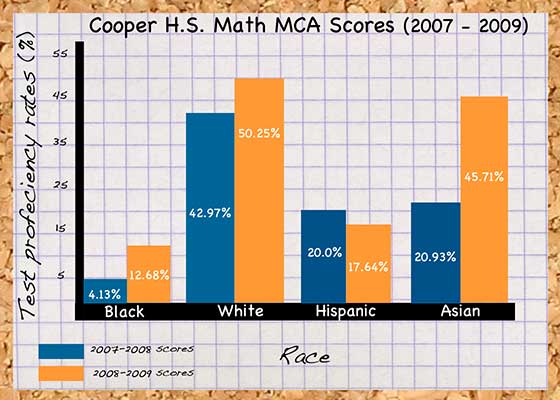 Robbinsdale Cooper High School MCA-II test scores for the past two school years. Scores jumped this year after the principal spoke directly to students in April about the achievement gap, and compared the school’s averages to state averages. Graphic by Kate Borman

When the daily announcements started one day in early April, students in Robbinsdale Cooper High School’s orchestra class were zoning out like usual until they heard their principal say he would be breaking up the student body by race to speak to them about upcoming assessment testing.

Principal Michael Favor announced that the Minnesota Comprehensive Assessment, or MCA-II, was coming up and he wanted each student to know its importance.

The room got silent. The students looked at each other with nervous smiles or just plain shock. Even the teacher was shocked. As students started their scales, a student muttered that Favor’s idea was stupid.

Throughout the suburban Minneapolis school, students wondered: Why separate us by race to talk about tests?

Max Olsen, a white senior, didn’t understand. “I don’t think race has anything to do with how good you do,” he said.

On the other hand, Jaleice Johnson, a black senior, understood what Favor was doing. “If the state thinks that it’s OK to split the test scores up by race then it should be OK for the principal of a school to address each race about their score. If it was split up by gender then the same thing applies,” she said.

“The biggest thing that I wanted to accomplish was dialogue and awareness,” Favor said later in an interview. He particularly wanted students to know that the test scores of Cooper’s black and Latino students lag far behind the statewide scores for those groups, but also that Cooper’s test scores overall were falling below the state averages.

“We’re talking about an achievement gap in this country but kids don’t know about it,” Favor said.

Favor, who is African-American, also heard feedback from Cooper’s staff. “Some of the comments were: ‘The only reason he’s getting away with this is because he’s black.’ For me, it’s not about race. It’s being a good principal. If I want you to be better at something and you’re a student here, I think I need to tell you.”

Favor’s efforts to close the gap

Since leaving North Community High School in Minneapolis to become Cooper’s principal in 2007, the soft-spoken principal has done a lot to reduce disrespectful talk and fighting and improve attendance and student achievement. Students must wear IDs and report to the office when they’re tardy. Math resource rooms help students improve their math skills, and each teacher must spend the first 10 minutes of class focusing on an aspect of math, reading or writing.

This year, he plans to require ninth graders to complete assignments and master important concepts before they move to higher-level classes. “I think to let people have this free pass really leads to failure, no credits and the achievement gap,” he said. “How can you master concepts at higher-level thinking if at the base level, you haven’t had the practice and repetitions?”

Assessment testing like the MCA measures how much a student knows on reading, writing and math. Minnesota’s gap in test scores and graduation rates between white students and minority students is one of the biggest in the nation.

All Minnesota students have to take the MCA-II test because of the federal No Child Left Behind law, which requires that all students test at a proficient level on tests by 2014.
The law requires each state to have a system for measuring student learning and hold school districts accountable for those results. In Minnesota, that’s the MCA test. Schools can lose funding or have their teachers replaced if they fail to make required progress.

Reporter Ariel Nash made her principal, Michael Favor, sad when he discovered her idea of African-American culture was limited to rap and hip-hop music. He encouraged her to explore her culture’s diverse and rich history. Read more about Ariel’s new mission here.

“We are asking our students to pass these tests but we haven’t told them why it’s important,” Favor said. “I see people focused on the wrong thing. I think doing the stanky leg and learning how to do that is more important than math and reading right now for some our students.”

Favor wanted to talk directly to the students about their test scores but knew from previous experience that if he confronted all of the students together, it could backfire. While principal at North, which is 70 percent black, Favor assembled all students to discuss the statewide tests and showed each racial group’s scores compared to the state averages.

“The parents were happy that we were having the discussion. Some kids … took it tough,” Favor said.

Although he saw a slight increase in test scores, Favor didn’t see the progress that he wanted from students at North. He said he thinks when black students saw their scores compared to the white students’, some were discouraged instead of encouraged to do better.

“There were some kids who felt like they didn’t want to be white. And they equated learning with being white, and that backfired. Although I did see growth, I didn’t see as much as I saw (at Cooper),” he said in July.

He didn’t compare them to other demographic groups. Statewide in 2008, about 11 percent of Native America juniors, 31 percent of Asian juniors, 14 percent of Hispanic juniors and 38 percent of white juniors tested at the proficient level.

“I just want students to focus on their demographic – not worrying about anything else,” Favor said.

The black sophomores and juniors were rowdy as they filed into Cooper’s lunchroom for their meeting. It took Favor five minutes to quiet them down, something the previous principal couldn’t do.

When he showed the scores in a PowerPoint presentation, there was a gasp.

After the presentation, students confessed their disappointment in seeing the scores of their demographic group. Favor used it as an opportunity to talk to them about doing the best they could do on the test. “I love you and want you to know this information. This is love,” he said to the silent room.

Michael Isaiah, a mixed-race senior at Cooper, wasn’t shocked by the low numbers.
“Many black kids I know show up for school for friends and talking … I really didn’t see them succeed academically. I really wasn’t that surprised, but it was kind of sad,” Isaiah said.

Jenna Luong, an Asian senior, felt that the intent of the meetings were good, but didn’t feel there was much anyone could do. “What are you supposed to do? Cram in two years of math or pile up on reading two weeks before the test,” she asked.

Cooper’s scores did go up

Part of the reason for higher scores is that for the first time, passing the test was required for graduation. Still, Favor feels that his meetings with students helped.

Senior Jaleice Johnson agrees. “I think that we were tired of seeing ourselves at the bottom all the time. To see that in black and white, it was just like a smack in the face. A wake-up call, if you may,” she said.

To see Principal Favor speak about his decision, check out this video: