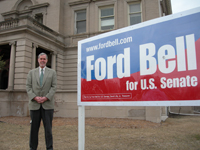 I’m sure most Whittier residents have noticed the immense Ford Bell for Senate signs in front of the Semple Mansion at Franklin and Blaisdell. These billboards do not indicate the presence of some millionaire shut-in obsessed with national politics; rather, they signify the campaign headquarters of the Ford Bell for Senate campaign. If you have somehow managed to avoid seeing the signage, perhaps you have heard one of Bell’s numerous radio spots each of which begins with a somber gonnngggg sound followed by the catch phrase, “clear as a bell, Ford Bell for U.S. Senate.” So who is this political newcomer and what will he bring to what promises to be a contentious Senate race?

According to his Web site (www.fordbell.com), Mr. Bell is, “committed to doing what he can to make people’s lives better-as a community leader, teacher, veterinarian, philanthropist, church elder, DFL activist and family man.” His two main platforms are opposition to the war (bring ‘em home now) and single-payer universal health care. While all that sounds good, I wanted to know more. How would Bell compete with the better-known Amy Klobouchar for the DFL nomination? More importantly, could he hold his own in what might end up being a nationally funded (and televised) smear-campaign by Republican Mark Kennedy in November? And what is his favorite Eat Street restaurant? I caught up with Ford at his campaign headquarters where he answered those questions as well as myriad others.

After greeting me in the hallway, Mr. Bell and I were accosted by a couple accompanied by a large tortoise shell pooch (see photo). The veterinarian’s love of animals was apparent as Bell bent down to glad-hand the animal. We then entered his headquarters. Once seated at a large table strewn with papers, pamphlets and cardboard coffee cups (the tools and refuse of a grassroots political campaign), I found that I barely had to ask questions in order to elicit answers. Bell definitely knows how to talk.

Since this is a community newspaper, I opted to begin the interview by asking Mr. Bell about neighborhood issues. Almost before my question concerning development in South Minneapolis had left my mouth, Bell was off and running. He seemed especially eager to discuss the contributions of the James Ford Bell Foundation to the Central neighborhood:

“We put over a million dollars into the Central neighborhood working on many of the same issues that are of importance to the Whittier neighborhood, such as housing stock, security, activity training for kids, summer activities, jobs, camps, scholarships, beautification, lighting issues…the whole nine yards.”

Fumbling somewhat (first time interviewing a politician), I asked Bell if his foundation had anything to do with the construction of the Midtown Greenway.

“No, we were south of there…but it was similar in that it was neighborhood. So if somebody owned their house and they hadn’t been able to paint it, or they hadn’t been able to put up siding and they couldn’t get out anymore because they were elderly…whatever needed to be done, we helped do it. We also gave neighborhood block clubs money to do their own beautification. This was not top-down, this was grass roots; they decided what they wanted to do.”

By this time it had already struck me that Bell is one of the more animated speakers I’ve ever encountered. He was literally perched on the edge of his chair –the embodiment of rapt attention. He leaned forward constantly, enunciated well and maintained eye contact throughout our interview. For someone with as little experience in the world of campaigning as Bell has had, he certainly seems to have cultivated abilities that will serve him well in his bid for Senator. When I asked him what he, as a Senator in Washington, could expect to accomplish at the neighborhood level, his answer again highlighted his faith in getting things done in a grassroots manner:

“Here’s what I learned working in Central: in these neighborhoods the people, in many cases, have a second job, which is their neighborhood association, or their block club. When we first started the Central program, I rode around with people from the C.N.I.A. [Central Neighborhood Improvement Association] who had jobs in the daytime, came home and spent the next eight hours working on neighborhood issues. What the federal government needs to do through block grants, is to continue to support –and not by trying to control everything—existing good programs. This is what we did in a very small way through the James Ford Bell Foundation. So the Community Crime Prevention, the CCP, which has lost a lot of its funding, these are the kind of programs that can make a huge difference, because they’re grassroots and they’re based in the neighborhood.”

When I asked whether support ought also to extend to neighborhood alliances, Bell fairly yelled:

“Absolutely! Support those programs! And the federal government should make those funds available through the cities. But again, it should be very grassroots, very dispersed, not controlled from the top, not bureaucrats saying, ‘Here’s what you need to do with that money.’ Because in my experience, the people in the neighborhood understand what those issues are. They know who the good people are and they know who the bad actors are. I worked across from the Little Earth housing project, with Sister Martha from the Holy Rosary Church. She would walk that neighborhood and there was a house there that was boarded up and this sixty-five year old nun tells me, ‘I went up to that boarded up house and I got through the front door,’ and she said, ‘If I can get my fat body through that door, any drug dealer can get in,’ and she called up the police, and told them, ‘It’s not boarded up adequately, get over here and board it up!’ These are the people who know what’s going on in the neighborhood. So the funding needs to be available. If the funding is available people get things done.”

There were some definite shades of Paul Wellstone in this speech: the populist belief in both helping the little guy and allowing the little guy help himself. He also exhibited some of the same verbal enthusiasm Wellstone displayed when I saw him speak in the late 80s. Next, I asked Bell why someone should vote for him over his Democratic opponent Amy Klobouchar. Bell was succinct in his reply:

“Look at our records. Amy is the county attorney and she’s a public servant, but before that she was a corporate attorney. I’ve spent my entire life teaching, volunteering, working as a non-profit executive, and working in philanthropy. I’ve been a volunteer with over twenty-five organizations. I haven’t spent my time trying to make money; I haven’t been a corporate attorney. My life has been about volunteering.”

In this day and age of corporate campaign donations and pork, this sentiment (when expressed by a politician) seems almost quaint. He added that his plan for health care was a true single-payer system modeled after Medicare while Klobouchar “has no plan.”

Next, I asked Bell what politician he would like to be compared to. His response was to the point and not all that surprising:

“I’d feel good about being compared to Russ Fiengold, because I think he’s a principled voice, just like Paul Wellstone. It’s not always about politics [with him]. He’s taken clear stands against the war, against the Patriot Act, against domestic spying. He’s providing leadership where our national democratic party is absolutely failing to provide leadership.”

The only line of questioning that failed to yield much response from Bell was when I asked him what he thought about Minneapolis’ push towards city-wide wireless internet. He responded with a terse, “that’s a Twin Cities issue,” followed by the admission, “I don’t have a thought on that.” At this point I realized we’d been speaking for a longer time than I’d been allotted.

Wanting to end the chat on a light note I asked Bell which Eat Street restaurants he utilized for take-out at his headquarters. After a pause he responded simply, “Christos. I like the Black Forrest and I’ve recently discovered Taco Morelos, but my favorite is Christos.”