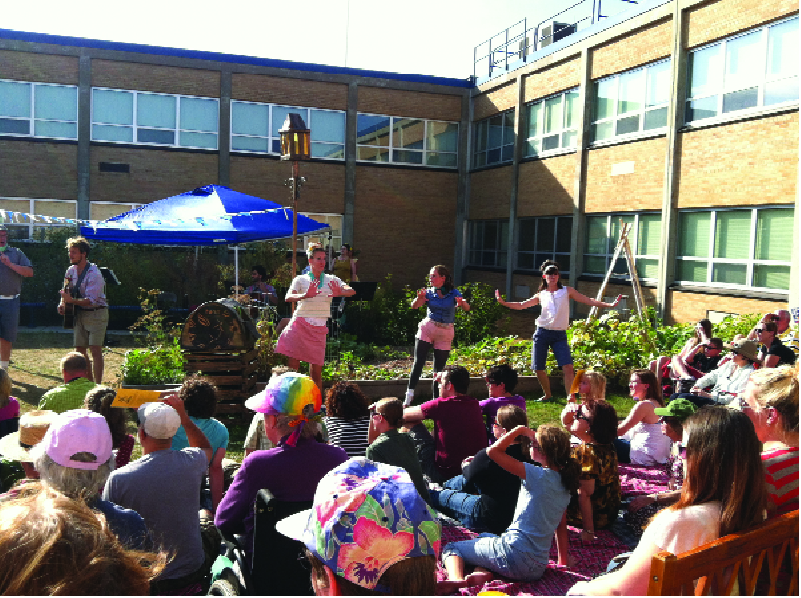 In addition to several planting beds, the school yard has a small classroom made of stumps, and  a larger area where the operetta took place.  The trees are several varieties of fruit (Operetta photo courtesy of Kristen Stuenkel)

When the theater group Mixed Precipitation chooses locations for their Picnic Operettas, they try to introduce audiences to parts of the urban ecosystem. That often means community gardens, but in Columbia Heights, it meant pulling up blankets and benches to the Blooming Heights Edible Schoolyard for the Sept. 15 performance “The Return of King Idomeneo.”

Blooming Heights has involved children and adults of all ages and abilities in some gardening aspect: planting, watering, weeding, and harvesting…cooking, donating produce, composting, and so on. “Or just enjoying,” said community education director Kristen Stuenkel, whose office not only oversees, but looks over the garden. It’s nestled between the Columbia Heights school district offices and the family center at 1440 49th Ave. NE within view of Castle Heights playground and the expanding Highland Elementary school.

With buildings on three sides, the site is somewhat protected from wind, and the bricks heat up. “I’ll bet we gain a zone,” Stuenkel said. It’s a classroom without a ceiling. Kids may never have tasted fresh raspberries, they get to, here, and tomatoes. They dig potatoes from a patch that now looks like random dirt. “They’ve had French fries, but don’t know they come from potatoes or what a potato looks like,” she said.

They planted fava beans and Egyptian wheat as “cover crops” to keep the dirt from blowing away in one of the raised beds. A student who had farmed in Egypt excitedly told his peers all about the wheat. Planted too late to fully develop, those crops will be turned over as compost to enrich the soil next spring.

While the most consistent users in summer are the Adventure Club for grades K-6, other classes have used the two seating areas, one made of logs, one of metal benches, for classes even unrelated to food and science. Diane Scully, last year’s National and Minnesota Secondary Arts Teacher, was the first.

“Every single grade, plus adult enrichment, pre-K and Early Childhood Family Education, used the garden. The Columbia Heights Recreation Department, the Fridley child care…We’ve shown hospitality to our neighbors,” Stuenkel said. The senior center folks have visited, and community members stroll through while their kids play at Castle Heights.

“We want them to enjoy the beauty, and learn” about the garden and gardening, “but any food is not for public consumption, it’s for the students. We say even to the students, picking only happens with teachers.” It’s “really a blow to the students” if ever anyone makes mischief in the garden.

Stuenkel (below) said the Mini Adventures (ages 33 months to 5 years) harvested some of the vegetables and presented them to the Family and Consumer Science (FACS) teens to use in their cooking classes. A FACS class named the spot in a contest. Blooming Heights opened in 2010. 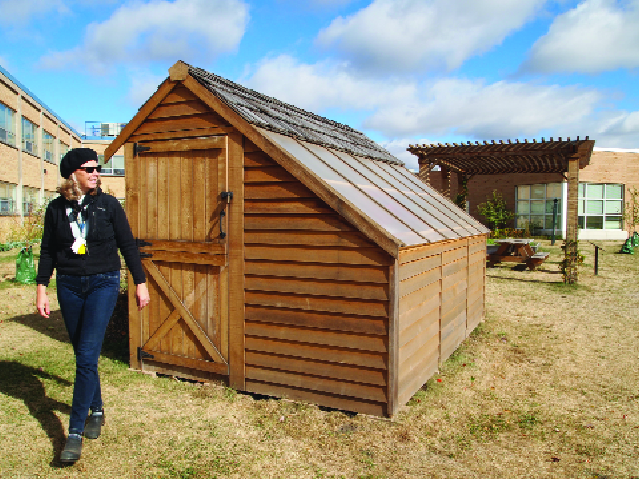 (Photos above and below by Margo Ashmore) 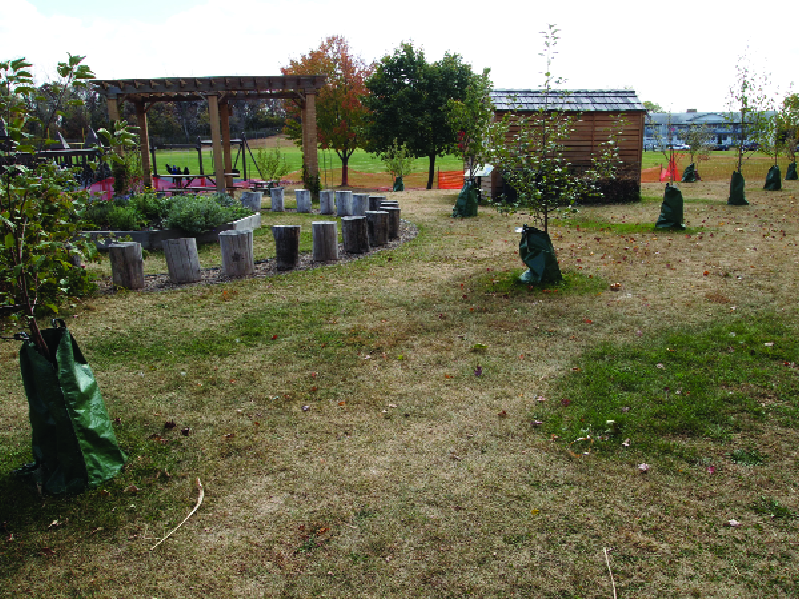 Excess produce not used in cooking is donated to SACA, Southern Anoka Community Assistance. They’ve collected about 100 pounds so far this year, down from last year’s 200. “We’re doing more cooking, and selling at the Farmer’s Market” at Crest View Senior Communities. The market teaches business skills and netted a few bucks to buy more seeds for next year.

“This is a great space for those who learn best with their hands,” she said. Special education classes, with 10 or fewer students, watered the plants. AVID (Advancement Via Individual Determination) high school students and STEAM (Science, Technology, Engineering, Arts and Math) students from Columbia Academy, the middle school, have participated.

How did it get started? Nicole Halabi, student services director, said Anoka County staff asked if the school wanted to participate in the Statewide Health Improvement Program (SHIP), which had many suggestions for programs they would fund. Columbia Heights Schools Superintendent Kathy Kelly and Stuenkel developed the garden idea.

Halabi said “the superintendent is all about nutrition, health, being tobacco free, and fitness. Urban kids are so far removed, they don’t have a clue where their food comes from. Kristen is passionate about gardening, and it’s a happy coincidence that her office is right here.”

A committee of teachers, parents, students, and master gardeners through University of Minnesota Extension developed the plans.

Minnesota Green Corps member Ty Nagamatsu, who assisted in staffing the edible school yard, is the one who connected up with Mixed Precipitation—they were at a meeting she attended. The theater company came to check out the site and did a sing-along with the Adventure Club; so those families got a special invitation. But as with all the Garden Operetta venues, Sept. 15, fans from all over the metro area came to enjoy appetizers while watching Mozart mashed with doo-wop for “a crunchy street corner vibe.”

In the play, Idomeneo promises the sea god Neptune, in exchange for his safety, to sacrifice the first person he encounters on dry land. Little does he know that will be his own son. When son Idamante’s true love Ilia offers to be sacrificed instead, Neptune relents, after also sending toxic slime through the sewers of “Crete and Railroad.”