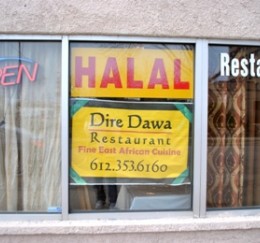 It’s Sunday afternoon and the weather is brisk in Minneapolis. The owner of Dire Dawa Restaurant cleans the backyard where he plans to open a balcony for social outings. He tells me that he is prepping for spring and summer. Inside the restaurant, three men are chatting away, waiting for food and watching Al Jazeera’s coverage of the uprising in Libya.

The owner is Abdulaziz Abdullahi. Born and raised in Dadar, East Hararghe in Oromia, Aldulaziz was educated as a nurse before he joined the Oromo liberation struggle in the early 1990s. His work with Oromia Relief Association earned him the nickname “ORA.” When OLF was squeezed out of the political process, he, like many of his contemporaries, later immigrated to Kenya seeking safety.

He came to the United States with his family in 1997 upon winning a Diversionary Visa (DV) Lottery. Once in the Twin Cities area, he worked as an employment counselor, helping East African refugees and immigrants with housing, jobs, education, and other resettlement services.

A natural entrepreneur, Abdulaziz has also tried his luck with business at different times. From a beauty shop at an African Mall in 2003 to a Limousine/Taxi service, to operating a home care & an adult daycare center, and now a restaurant. He even took business classes at a community college briefly but withdrew because “it didn’t work out too well with [his] family and other schedules.”

Abdulaziz has been running an adult daycare center since 2009, serving over two dozen Oromo elders. According to him, the daycare inspired his latest business venture. Since starting the adult daycare, he has commissioned other restaurants to cater food for the elders every week. That is when the idea of opening a restaurant first came about, he tells me. Aside from the hassle of transporting and ordering the food, it costs a whopping $500-600 per month to serve the daycare attendants. His idea was to provide food from an Oromo restaurant: a familiar taste for the seniors at the center, as well as reliable quality. According to Abdulaziz, things are working out well so far.

I asked whether his restaurant serves Oromo or Ethiopian food. He sits back and tells me:

When two communities live side by side, they trade off food, language, culture and many other social artifacts. This is not unique to our region. Oromia is the breadbasket of Ethiopia. Most food items are grown within Oromo country, one way or another. As such, it is very difficult to say this or that food item belongs to one particular ethnic group. Buddena (also known as injera) is a known East African food. Hence, I think it is fair to say we serve East African food.

Named after one of the major, historic Oromo cities, Dire Dawa Restaurant serves breakfast, lunch and dinner. For breakfast, snacks such as sambusa and chapati are served with spicy tea in addition to harisa (made from goat meat, wheat and butter), marqa (porridge) and hulbata (drinkable marqa). The lunch menu offers rice, spaghetti, buddena, chicken stew (known as itto indaqo or doro wot), goat, beef and fish. All the meat served at the restaurant is halal.

Noting the relative success of Ethiopian restaurants in the Minneapolis area, I asked why, given their high number, Oromos fail to open and manage successful restaurants? Quick and cautious, he tells me that it has a lot to do with the circumstances under which many of the Oromos in Minnesota came to this location. Many were farmers driven out by war and growing repression in Ethiopia. To own and operate a business, Abdulaziz insists, one needs a great deal of commitment, both financially and time-wise. It also requires building good credit history and the ability to navigate through inspection and licensure requirements. With the absence of culturally sensitive market research and a lack of consultation with bankers, many individuals get discouraged by these daunting processes.

To my question on whether recession and unemployment discourage people from venturing out, Abdulaziz responds that he is in the business with the understanding that these are tough times. But the restaurant offers a reasonable price for the amount and quality of food served. Additionally, beverages like coffee and tea are served free of charge for those who dine in. Currently, Dire Dawa Restaurant is run by two owners and two other workers. He hopes that will change soon.

Before we parted ways, I posed a question about how he views competition with other Oromo and Ethiopian restaurants. He quickly responds, “That is not enough.” The more restaurants we have in this area, the more people will know about the Oromo, their food and culture. He sees the restaurant as part business as well as part community service.

Abdulaziz also had some words of advice for aspiring business owners.

In closing, he emphasizes and encourages more Oromos to try different business opportunities. Instead of everyone opening a grocery store, Oromos should look elsewhere to serve the diverse interests of the thriving community. Families and friends of the owner walked in carrying an infant baby. We parted after discussing politics and many other things over a delicious lunch.

Dire Dawa Restaurant awaits you with a friendly smile and the very best of East African taste.