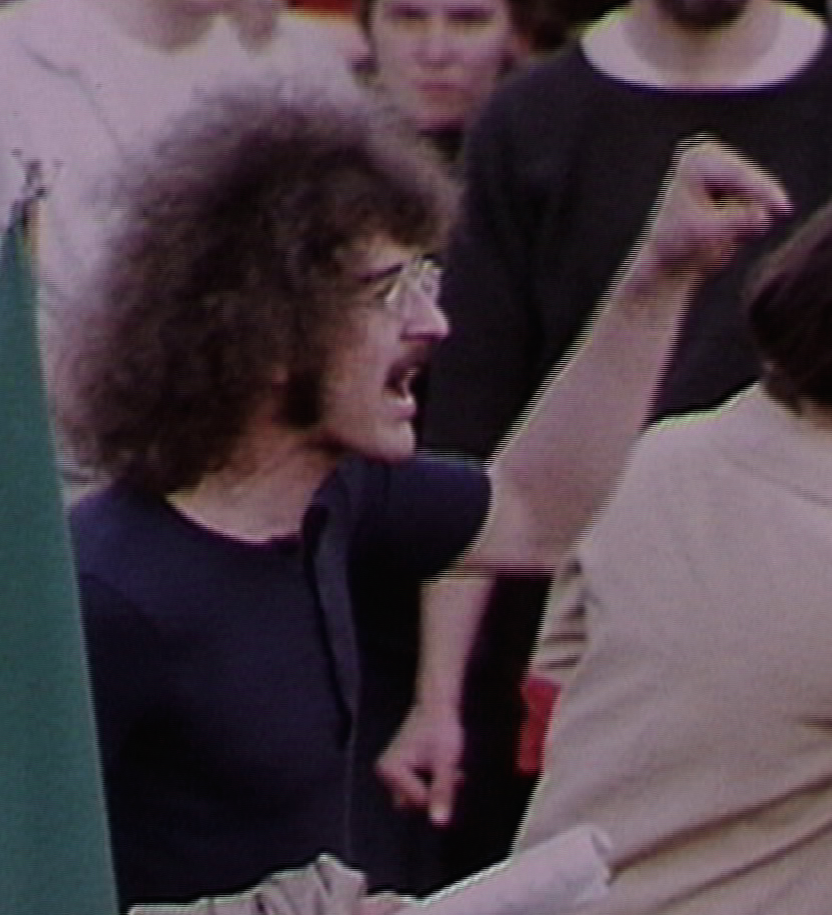 For one month in 1970, protesters occupied two buildings slated for demolition to build a fast-food restaurant called the Red Barn in Dinkytown near the University of Minnesota in Minneapolis.

One predawn morning in early May, police in riot gear cleared the protesters while bulldozers leveled the buildings. Within a day, the demonstrators built a peace garden on the site and, a year later, Red Barn gave up the idea of building another fast-food store in Dinkytown.

Subsequent efforts to stop development in Dinkytown haven’t gone so well. Matt Hawbaker, who helped organize Save Dinkytown in an unsuccessful effort to stop a much larger development two years ago, said he felt awe and jealousy as he watched Al Milgrom’s “The Dinkytown Uprising,” a film about the Red Barn protest.

Hawbaker and a panel of other neighborhood activists and residents compared notes April 20 with Monte Bute, one of the protestors featured in the film.

“We went with a more political solution,” said Hawbaker, who noted that they came close to having the City Council block demolition of buildings to make way for the mixed-use Opus Development, now called Venue. “The projects that are proposed are not the best shot for independent business,” he said. “We got a Starbucks, a Great Clips and an offshoot of Goodwill.”

He and Lynn Nyman, a manager for Loring Café and Varsity Theater, said that more than 60 percent of Dinkytown’s businesses are still local, adding that the area has been and continues to be an incubator of small business.

Another panelist, Hung Q. Russell, chairman of the Marcy-Holmes Land Use Committee, called the film a well-drafted story narrative. “I lived in Dayton, Ohio, and had no idea the Red Barn was headquartered there.”

Nyman said some old buildings in Dinkytown are not worth preserving. “It already has changed,” She said about Dinkytown. “It has evolved. It’s not what it used to be. I’m not opposed to change.”

Russell said culture is hard to define and new buildings won’t do it. “You can’t build culture. It’s not going to happen. Look at Block E downtown to see that.” Some old buildings, even those without architectural merit can be “repositories of memory,” he said. Dinkytown is qualitative, he said, with overlapping forces from the University and downtown.

Some participants said the closing of schools reduced the sense of ownership in the neighborhood.

“The big change came when the high school closed,” said Joan Campbell, former member the City Council and the Metropolitan Council. “A man at the House of Hanson [grocery] across the street knew the kids’ names and what their favorite candy was.” Several others immediately recognized the description and provided the man’s name, Jose, and said he also made and sold salsa.

Lois Kelly of Roseville said both she and her husband graduated from Marshall University High School. “I feel like that vibe has disappeared,” she said. “There are zero riots over Afghanistan and Iraq.”“I’m sad to see the way it looks, even now,” she said. Their daughter also attended Marshall. “Our daughter was in the Red Barn protest,” she said. “She said, ‘Just let them touch Al’s Breakfast, and I can find my way back.’”

Neighborhood resident Barbara Camm said she still feels the “funky and different” Dinkytown she knew as a student in 1958 when she visits the Espresso Royale coffee shop where she sees students studying, working on computers and conversing.

The Target store in the Marshall building has created positive activity, Nyman said. “You look at the architecture and it’s dismal. We don’t hate progress. We just don’t want it to be so ugly.”

Artist Sherri Faye said she plans to open a studio in Dinkytown later this year.

“Dinkytown was a service center and it was a very small town you felt there,” said David Duggan, a graduate to Marshall High School. The numbers of young faculty hired in the 1950s attracted students like him and it was an incubator for small and niche businesses.

Bute suggested the some of Dinkytown’s character was related to run-down, cheap housing that’s being replaced.

Bute, who said he’s loved in both Southeast and Northeast Minneapolis, said Northeast will start losing its character as well if Nye’s Restaurant is torn down for

more high rises. “With Nye’s gone, you will see more of the same development. You can’t calculate what that will do.”

Hawbaker said the DFL progressives in the city have “drunk the ideological Kool-Aid” of more density and development. He said urban studies students favored pedestrian and bicycle-friendly cities when they look at a plan while architecture students look at how ugly and temporary the buildings are.

Milgrom’s film “The Dinkytown Uprising,” will be shown again at 7 p.m. April 29 as part of the Best of the Fest selections from the Minneapolis St. Paul International Film Festival at the St. Anthony Main theater.

Another film from a Minnesota film director, Norah Shapiro, will be shown as part of the Best of the Fest at 3 p.m. April 26. The film, “Miss Tibet: Beauty in Exile,” is the story of Tenzin Khecheo, a Tibetan-American teenager from Minnesota, who faces a clash of cultures when she competes in a beauty pageant in India.

Another film selected for an additional screening is “H2Omx,” a Mexican film in Spanish with subtitles, to be shown at 1 p.m. April 26. It dramatically outlines the need for water management.

Milgrom’s second career as a filmmaker will be celebrated at 6 p.m. May 17 during a fundraiser at the Varsity Theater at 1308 Fourth Street in Dinkytown. He has created a short, “Rediscovering John Berryman,” [link: http://www.rediscoveringjohnberryman.com/] that he hopes to expand into a feature-length film. He has other Minnesota film projects in the works. [link: my Milgrom’s to-do list story]