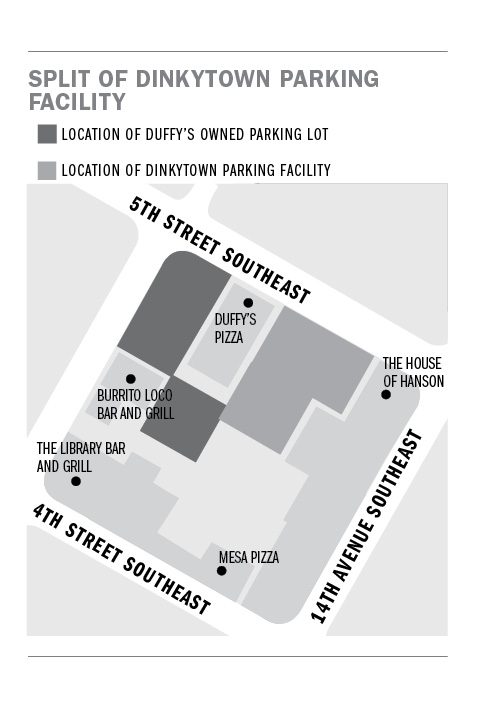 The Dinkytown Parking Facility — the Fifth Street Southeast space shared by a group of businesses — has split into two separate lots. The new lot will cost $1 per hour, which will be a dollar less than current parking.

Pat Duffy, owner of Duffy’s Dinkytown Pizza, now manages what was the west portion of the Dinkytown Parking Facility. He will combine the parking space behind his restaurant with the lot on the corner of Fifth Street and 13th Avenue Southeast, with 50 spots in all.

Though the new lot is not officially open, Duffy allows all-day parking for $5, which he said is going over well with employees in the area.

“People with jobs like waitresses don’t want to spend half of their tips on something like parking,” Duffy said.

But for now, the Dinkytown Parking Facility remains more of a bargain for short-term parking.

Prices for parking at the lot will stay at $2 an hour, said Laurel Bauer, owner of The House of Hanson and one of the lot owners.

Before the split, businesses on the block joined privately leased space into the larger Dinkytown lot, managed by Denison Parking, to share profits.

But Duffy said he “got tired of how things were run.” The final push, Duffy said, came with the expensive upgrade to the facility.

The Dinkytown Parking Facility first opened in 1974 and is currently being upgraded to city code requirements, which Bauer said could cost more than $100,000 for the lot owners. Updates include resurfacing, fencing and landscaping.

“We have to bring it up to par as if we’re opening a new business,” Bauer said.

When renovations are done and new equipment is installed, the Dinkytown Parking Facility will be able to accept credit cards. The entire payment process could be automated, though Bauer said there are no plans to transition into a 24-hour facility.

But Duffy said the updates didn’t justify the price tag.

“Our previous managers wanted to go in a different direction as far as automation,” Duffy said. “We weren’t in agreement.”

“The way they operate — the overhead is just too high,” he said.

Duffy’s new lot will be a pay-and-display operation, meaning customers will pay for a certain amount of time and then display the ticket they buy in their windshield.

“It’ll be cheaper than anything else around here,” Duffy said.

Not all members of the community are happy with the split. Skott Johnson, the president of the Dinkytown Business Association, said business owners have had mixed reactions.

“I hate to see it come apart,” he said. “Before, we had cooperation with all different business entities, and the city was happier to deal with us when we worked together.”

Johnson also worried that people think parking spaces in the area have been lost with the split.

Parking in the Dinkytown area is a huge pain, said Matt Pedersen, a psychology major at the University of Minnesota.

“It feels like its catering toward towing companies or making the city money,” Pedersen said.

Currently, visitors have the option to use parking meters or to find off-street parking in the Marcy-Holmes neighborhood or in the two existing parking facilities — the Fifth Street lot or the facility across the street next to the University Technology Enterprise Center.

Most choices for parking seem to cater to visitors to the area and not residents, Pedersen said. Taking away some parking restrictions like two-hour limits on side streets would be a huge help, he said.

Some businesses offer parking validation for the Dinkytown Parking Facility. At The House of Hanson, for example, a customer can spend $10 and receive free parking, Bauer said.

Duffy said he hopes to offer a similar discount in the future. If people park in his lot, they could have the option of bringing their ticket into nearby businesses to receive a discount on their purchase.

While the two parking lots sit side-by-side, Duffy said he doubts he’ll affect the Dinkytown Parking Facility’s revenue, despite the new price disparity. The other parking lot is too well established for that to happen, he said.

But Duffy hopes his lower prices will attract visitors looking for a cheaper alternative.