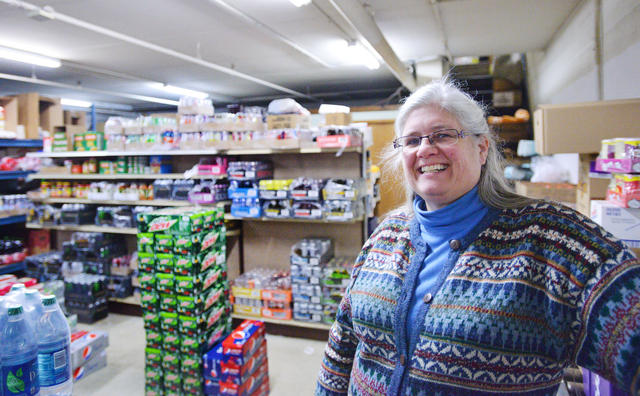 House of Hanson, owner Laurel Bauer's claim to Dinkytown fame, has been in her family for 80 years. Bauer recently signed a purchase agreement with developer the Opus Group and will be closing the store. (Photo by Jaak Jensen)

She grew up in Marcy-Holmes. She went to Marshall University High School, just across the street from her family’s Dinkytown grocery store. She met her husband at the University of Minnesota, and each of her children attended her alma mater.

Now she is looking to close the final chapter on the more than 80-year story of her family business, House of Hanson.

Earlier this month, she signed a purchase agreement with a developer that plans to raze the building housing her business and build an apartment complex in its place.

First opened by Laurel Bauer’s grandfather as a cafe, House of Hanson evolved into a soda fountain and eventually the existing grocery store.

The family celebrated its 80th anniversary last year. According to Laurel’s husband Perry Bauer, the milestone was the result of the family’s strong business ethic.

“Eighty years of continuous business by a single family is not an accident,” he said. “It happens with a lot of hard work.”

According to Laurel Bauer, House of Hanson is one of Dinkytown’s three “original” businesses, along with Al’s Breakfast and Vescio’s Italian Restaurant.

While House of Hanson was built on family traditions, Laurel Bauer runs the store in a nontraditional way.

She manually orders all of her products, which allows her to customize her orders based on the schedule of college students.

During finals, she said she makes sure she’s fully stocked with notecards and highlighters; when the architecture classes make bridges out of playing cards, she puts in extra orders to accommodate them.

“My holidays are mid-quarters and finals,” she said.

It’s just one of the ways she tries to live up to her motto: “Make them leave smiling.”

Though she’s doesn’t lead in a formal way, Laurel Bauer’s experience and established presence make her an authority in Dinkytown.

Other business owners often seek her out for guidance, said Skott Johnson, president of the Dinkytown Business Association.

An active member of the DBA, Bauer frequently donates her time and effort to support it, Johnson said.

“She is a rock,” he said. “She’s always right in front to do whatever is needed for Dinkytown.”

For Laurel Bauer, volunteering her time is a matter of responsibility.

“Being needed is a good thing,” she said. “It keeps you going. I don’t mind being needed.”

Even right outside her doorstep, Laurel Bauer keeps tabs on the students from P.E.A.S.E. Academy, a nearby sober high school, who can be seen outside her store most days.

Josh Caldwell was one of those students. He said the relationship between the students and Laurel Bauer could go one of two ways.

“If you were a disrespectful punk, you didn’t get to know her,” he said. “Anyone who got the chance to know her was really lucky.”

Caldwell often plowed the parking lot behind her store and swept the sidewalk in front of it. Though he got school credit for his help — in addition to Laurel Bauer paying him — Caldwell said he would have done it without the perks.

Laurel Bauer said she tries to get the students to appreciate the activity and character of Dinkytown and to make good choices.

“I make it a point to tell one every day to quit smoking,” she said.

She has taught the students to tie rubber bands around the cigarette packs as a trick to help them quit.

Andrew Bauer said his mother’s investment in all aspects of Dinkytown reflects how much the area means to her.

“Her whole life pretty much has been within [a] one mile radius,” he said. “I don’t think there’s anyone that cares more about Dinkytown than my mom.”

House of Hanson began losing business when a CVS Pharmacy opened a few blocks away in 2011.

Then plans were approved to raze the University Technology Enterprise Center — which formally housed Laurel Bauer’s high school — and replace it with student housing. The new apartment complex was also originally designed to include a grocery store, just across Fifth Street from her shop.

“It was kind of the first jab,” Bauer’s son said. “But now this feels like the knock-out punch.”

Developer the Opus Group approached Laurel Bauer for her key corner location, she said, and a student housing project there is now in its infancy.

“I have fought the fight for a lot of years,” she said. “But I think things have to evolve.”

The plan to build a six-story, mixed-use apartment complex has upset some; a “Save Dinkytown” group has been established to try and stop the project.

Laurel Bauer said some of the blame has been cast on her.

“The word I hate the most … is greed,” she said. “It’s not about the money. It’s about survival and doing what’s right for my family.”

For her, the sale was about closing shop before she became “the generation that ran it into the ground.”

“Laurel is just one piece of that bigger puzzle,” he said.

Whether the apartment complex will replace House of Hanson, there are certainly people who will miss the corner grocery store.

Katie Fritze, a cashier at the store, said she’s sad to see it go and irritated with the development.

“It’s annoying,” she said. “But you can’t get in the way of progress.”

For now, Laurel Bauer said the store is going strong.

Once the store is closed, she said she’ll be back to visit her favorite restaurants and watch the Gophers play football. She said she was also looking forward to volunteering more at her church.

“It’s been my life to come back to Dinkytown every single day,” she said. House of Hanson or not, she shows no sign of changing that life anytime soon.