Hundreds of emails and phone calls flooded Pastor David Kind’s University Lutheran Chapel office Wednesday after his congregation heard the church will close by the end of the year.

The board of directors at the Minnesota South District of the Lutheran Church Missouri Synod, which owns the Dinkytown building, voted in favor of the $3.2 million property sale last week.

The church has been fighting to save its University Avenue space for almost a year. Plans to demolish the building and replace it with a new apartment complex are in progress.

Right now, the building is likely to go to Doran Construction, the company behind Sydney Hall and 412 Lofts, Kind said.

More than 100 University of Minnesota students regularly visit the church, making up roughly half of the congregation’s members.

Church members say the main objective of the campus ministry is to provide community outreach to students.

“We have always been a congregation rooted in campus ministry. We grew out of it. If we relocate even five miles away, our dynamic would change,” Kind said.

University senior James Vieregge has attended the church for more than three years. The chapel is one of the only three Lutheran churches near campus.

“It’s incredibly valuable to have a [church] that’s about three blocks away from my apartment,” he said.

“When campus clears out during holidays and summers, the church clears out,” Vieregge said.

The church has struggled with the threat of possible closure for several years, Kind said.

The South District voted to sell the property in 2008, but failed when offers didn’t come knocking.

Though church members say they know a future sale was inevitable, it didn’t seem like an immediate threat.

Last year, the church’s council started another committee to sell the building, but two resolutions Kind dug up in church archives earlier this year seemed to bring hope for the church’s survival.

The two documents established specific provision for the property’s sale. Kind presented those to the committee earlier this summer, but the appeal was ultimately dismissed.

The South District Synod could not be reached for comment.

He’s seen disconnect between the Synod and many churches throughout the years.

“I’m not surprised it happened, but I am in the manner it was [conducted],” said Bolt, who has been a University Lutheran Chapel member since 1985. 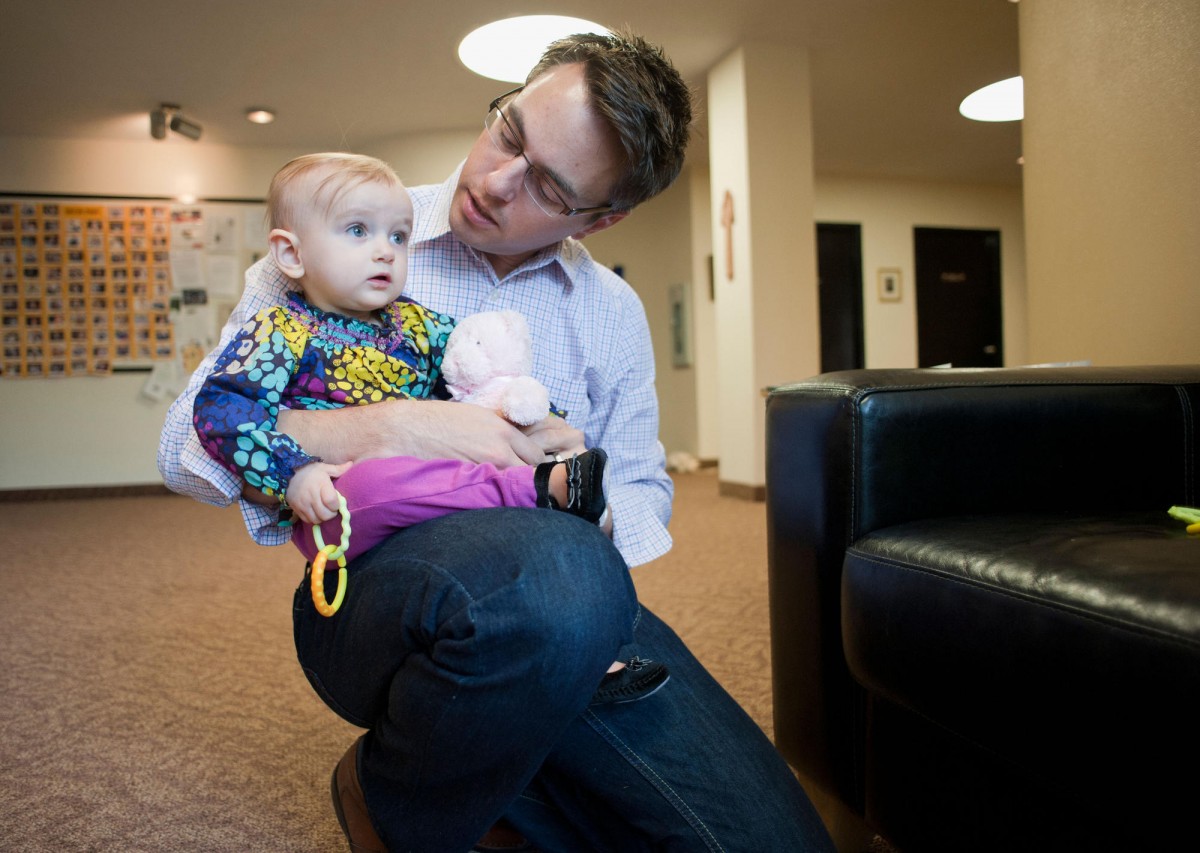 Brad Buelow and his 1-year old daughter Ruby take a break from service Sunday at University Lutheran Chapel. Buelow has been a member of the congregation since marrying his wife there four and a half years ago.

Some church members believe the disagreement stems from long time controversy of how to practice faith.

“The sale is not an isolated incident,” said Matthew Rieddle, a University junior who attends weekly services at the church.

The University Lutheran Chapel practices a more traditional faith model, which Kind says isn’t popular with the Synod. Church members say there has been a push in the past 25 years for a more liberal faith doctrine.

Vieregge said he believes some churches have been “ruined” by the district in the past.

“I know people who have switched denominations because of the Synod’s shenanigans,” he said.

Kind said he believes the struggle is part of a theological vendetta against several confessional Lutheran churches.

“This isn’t a challenge coming from outside the church. It’s an obstacle coming from those who are supposed to be our brothers and sisters,” he said. “That’s a hard thing to bear.”

Despite this, Vieregge said, “Kind is able to draw in people without “gimmicks.”

One of his biggest feats is his ability to draw people into a congregation with an old-time feel, he said.

In response to the sale efforts, the congregation has started several committees, including a national fundraising campaign, to fight the closing. Despite the Synod’s decision, Kind believes the church still has a chance.

“This is going to be a long process,” Kind said. “I don’t see it getting resolved soon.”