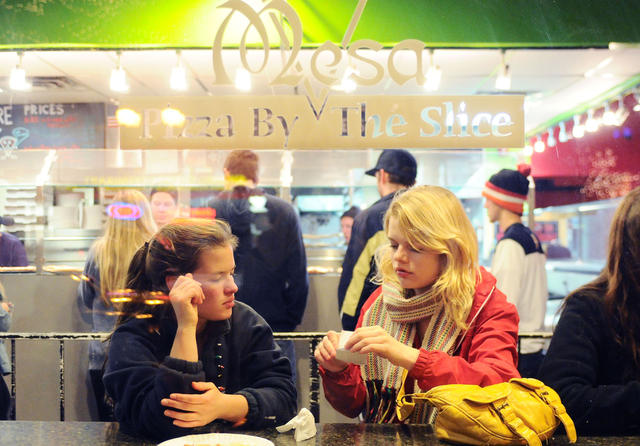 Dinkytown is inching toward a new, comprehensive security plan.

The Dinkytown Business Association will meet with police and city officials Dec. 20 to finalize a new security plan and discuss funding options.

“It’s basically a numbers thing,” Johnson said. “There are so many people here that sometimes it gets out of control.”

According to the DBA, hiring these officers for four hours each weekend would cost the Association $11,200 annually.

Johnson said the DBA is still discussing security for other weekends when school is in session. The association is attempting to keep costs low: Hiring four off-duty police officers every weekend the University is in session would cost an estimated $51,200.

Police are looking for a definite plan from businesses soon so that increased security can be in place before Spring Jam, said Nick Juarez, a crime prevention specialist with the Minneapolis Police Department.

“I think there’s still a wide variety of opinions,” he said.

While police are waiting for a plan from the association, they have increased pressure on new late-night businesses to hire off-duty officers.

Dinkytown’s Potbelly Sandwich Shop applied for a permit this fall to stay open late on weekends. The application requires police approval on a security plan for the business, said Grant Wilson, manager of the city’s licensing department.

“That was one of their conditions: that we had to hire an off-duty police officer in order to get their support,” said Joel Berlowe, Potbelly’s general manager. “At this point, if we’re paying for the full expense, we feel it might not be worthwhile.”

Hiring off-duty police is one of several changes police suggest to businesses serving late-night crowds. Other adjustments include limiting their menus and closing off seating.

Without police approval on their security plan, Potbelly will not be able to progress to the next stage of their application process, Wilson said.

“It depends on the business, but we make that recommendation because it is the best practice,” Juarez said. “Off-duty police offer a different type of presence than private security.”

Extended hours permits were not always so tied to security practices.

Currently, the permits are linked to business licenses and must be renewed annually. Until about two years ago, businesses applied to the planning division, which granted indefinite permits, Wilson said.

Since the process was not linked to a business’ license, a security plan was less of a factor in granting extended hours. The planning division instead looked to the number of 911 calls and police reports from the area, said Hilary Dvorak, a Minneapolis city planner.

Berlowe said he hopes to share off-duty police with a neighboring business, like Qdoba, which currently hires private security late at night.

“Security personnel can’t really do a whole lot other than stand there and try and look tough,” Berlowe said. “As far as using force and things like that, police are the only ones really authorized to do that.” 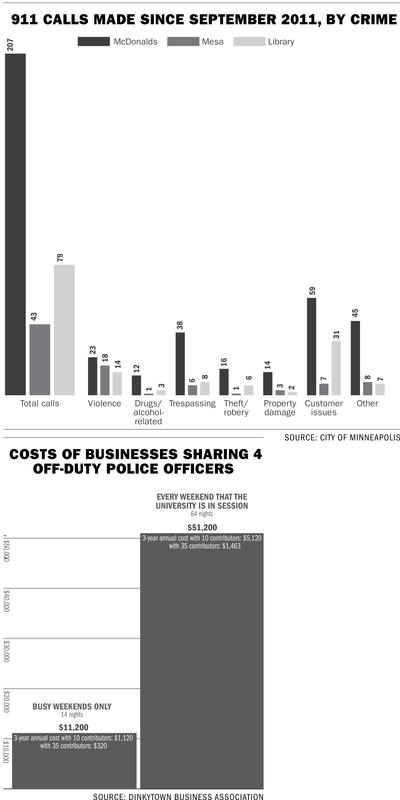 When Psycho Suzi’s Motor Lounge, Grumpy’s Bar and Grill and two other businesses found themselves needing more security during peak hours, they pooled their resources to hire two beat cops for the neighborhood.

The initiative eventually turned into the Riverfront Entertainment District, which has expanded to include 16 businesses in its second year, said Christine Levens, executive director of the Northeast Minneapolis Chamber of Commerce.

DBA President Johnson said he is interested in RED as a potential model for Dinkytown.

Ward 3 Councilwoman Diane Hofstede, who represents both neighborhoods, will be at this month’s meeting to talk about the model, Johnson said.

Levens said RED operates on donations and fundraisers, with no set officer-sharing arrangements.

“Everybody in the geographic area gets the benefit whether they have made a contribution or not,” Levens said. “The police are charged with covering the entire area.”

Johnson said he is interested in potentially creating a new entertainment district for Dinkytown that would operate in a similar opt-in manner.

Johnson and Juarez both stressed the need to finalize a plan in the coming months before any major new student housing developments open and the Vikings begin playing at nearby TCF Bank Stadium.

“There are a lot of changes coming to Dinkytown,” Juarez said. “All of that adds new challenges of having more people in basically a six block radius.”