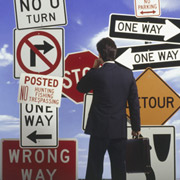 Three recent news announcements involving the loss of skilled, well-educated and mostly white-collar jobs should have Minnesota policy makers asking what they might learn from economists to put you – their constituents – back on the road to recovery.

The most recent announcement came this past weekend when Nestle said it will close its St. Louis Park nutrition factory in 2012, cutting 243 jobs at its Nestle HealthCare Nutrition subsidiary.

As Tom Webb noted in Monday’s Pioneer Press (“Nestle pulling plug on St. Louis Park operation“), the world’s largest food company acquired what had been Novartis Medical Nutrition in 2007. Production of the nutrition products will be transferred to other Nestle plants in the U.S.

This comes just days after defense contractor Lockheed Martin said it would close its 50-acre Eagan campus, eliminating 250 jobs and transferring out as many as 750 other employees. Susan Feyder, writing in the Jan. 13 Minneapolis Star Tribune (“Lockheed sends layoff notices to 250 at Eagan plant“), reported that retained employees would be offered jobs at Lockheed locations in Oswego, N.Y.; Manassas, Va., and San Diego. The laid off employees mostly work in general administration, finance and information technology.

On that same day, Tom Scheck at Minnesota Public Radio reported that Republican lawmakers in the Minnesota House were preparing a budget package that would reduce the number of state employees by 15 percent (about 5,250 people) and freeze salaries on those left behind. These draconian steps would save an estimated $525 million, or reduce the state’s anticipated $6.2 billion shortfall by that amount.

Such news points out just how fragile Minnesota and the nation’s economic recovery remains, despite a statistical turnaround that began 18 months ago. And it is also why lawmakers working on budget problems should ask themselves if they are helping the recovery, or just piling on more problems.

Harvard’s highly respected Joint Center for Housing Studies made the connection between the job market and the housing market in its annual The State of the Nation’s Housing 2010 report, issued on June 14 last year.

“If history is a guide, what happens with jobs will matter the most to the strength of the housing rebound,” said Eric S. Belsky, executive director of the center. “Right now, economists expect the unemployment rate to stay high, but if employment growth surprises on the upside or downside, housing numbers could too.”

That’s what makes recent Minnesota news on the employment front so threatening. The link between housing and labor markets is clearly a two-way street.

“If housing-related growth is not going to boost the recovery this time around, we need policy – particularly monetary policy – to continue playing a stimulative role.”

The Boston Fed executive said the weak housing market is a weight that will slow the recovery for years ahead. The four percent economic growth expected for the U.S. economy will not be sufficient to replace the eight million jobs that were lost in the recession; and that impacts household-related spending on goods and services, renovation work and purchases of durable goods, and not just the real estate market.

What hasn’t been said, but should be obvious, is that ill-conceived public policies can nudge the economy further downward and prevent recovery.

State employees, local employees and school teachers are mostly in the modest- to middle-income bracket of our population. While statistics aren’t available, it is easy to assume that a high percentage of these public servants and professionals are homeowners or prospective homeowners.

You shouldn’t need Rosengren’s or Belsky’s credentials to question how tossing 5,200 or more of these neighbors out of work will be good for you, for your own home values, and for the general economic health of our state and communities.

On top of that, there are more than 1,000 of our neighbors who will lose their jobs – here, at least – with the closing of the Nestle and Lockheed operations. Granted, as many as 750 homeowners may pack up and leave for Lockheed jobs elsewhere. But in doing so, they, too, will be placing homes on the depressed local housing market.

In absolute numbers, jobs now at risk from both corporate actions and threatened public policy actions are equal to or greater than the number of homes that were sold in the 13-county Twin Cities Metropolitan area in 2010. That’s without knowing the number of jobs that will be lost from school districts and local governments as they scale back budgets.

But if the new jobless end up abandoning or putting their homes on the market, the number of homes on depressed metro markets could double in the coming year.

In hard numbers, we are now seeing where public policy can often do more damage than good to the economy; and where efforts to stimulate economic activity are to be lauded when standing put is certain to fail.

Put another way, this is where the “no new taxes” pledge of some policy makers can be translated to mean “no home equity.”

The median household that has owned a house for more than five years has lost $67,100 in home equity since 2006. Those losses will mount if new job losses flood local markets with more houses with depressed prices.

Adding more pressure to mounting decreases in home equity are property tax increases that tend to disproportionately hit poor, middle-class and senior citizens. One of the main reasons for these property tax increases is the “no new taxes” myth. Not raising income tax, which is based on ability to pay, has led to reductions in state revenue sharing with local governments, thereby forcing property tax hikes.

Easing the state’s budget problems with more progressive revenue would help keep neighbors employed and start rebuilding your own home’s equity.
Even a halfway restoration in home values, called a “reversion to mean,” would add $33,550 to equity in median-priced homes. That’s a pretty good return on investment for having a sensible state tax policy.