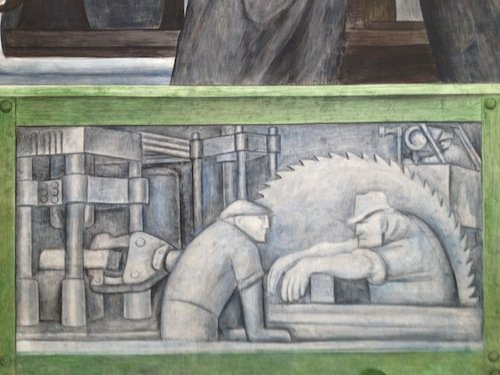 From polka-dotted houses to Diego Rivera fresco panels, the art I saw on a short vacation Detroit last week was eye-opening. The great city, so rich in history and culture, has had its share of problems recently, but it also offers beauty and history.

The Detroit Institute of Arts contains “Detroit Industry,” 27 fresco panels created by Diego Rivera on the inner court of the museum. It’s the most awe-inspiring piece of work I have ever seen. 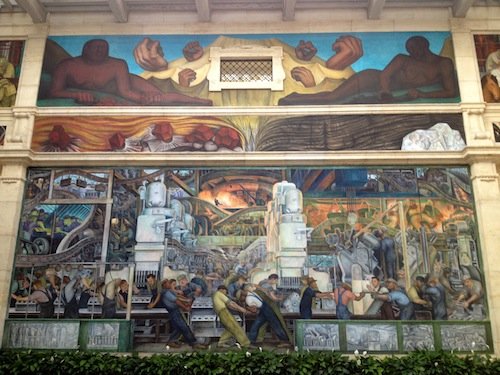 Enormous in size and scale, Rivera’s frescos are rich in symbolism and layers. Drawing from Christian, Aztec and ancient Western civilization history, the frescos portray large scenes in Ford’s motor plant, the workers densely packed and moving as if part of the machines themselves.

I highly recommend taking the virtual tour of the frescos here. The interactive tour is great because it tells you all the details of the work. What I found the most interesting was Rivera’s concept of duality in his presentation — where he shows the good and evil together — particularly in the context of industry and technology. In Rivera’s vision, scientific advances have both life affirming and destructive qualities. Air travel connects people to one another, but planes are also used in war, for example, and chemistry, which brings us life-saving vaccines also is capable of making chemical weapons.

The murals created in the heart of the “Motor City” inspire reflection on the great invention of the car itself. Yes, cars have made our lives more convenient, but they’ve also sped up the over-use of natural resources and caused large amounts of pollution. Detroit’s over-reliance on the car industry as its central industry has caused financial hardship to the city. When the city went bankrupt, the museum itself was in peril before the voters decided to increase the sales tax to prevent the works inside of it from being sold off to the highest bidder.

The Heidelberg Project isn’t quite as lucky. Started about 20 years ago, the outsider-art installations created on the outside of houses along several blocks, are one of Detroit’s more controversial art projects, with nay-sayers believing the projects ugly, despite its fame. Here’s a short description from the project’s web page:

“Armed with a paintbrush, a broom and neighborhood children, Guyton and Grandpa began by cleaning up vacant lots on Heidelberg Street. From the refuse they collected, Guyton transformed the street into a massive art environment. Vacant lots literally became “lots of art” and abandoned houses became “gigantic art sculptures.” Guyton not only transformed vacant houses and lots, he integrated the street, sidewalks and trees into his mammoth installation and called the work, the Heidelberg Project (“HP”).” 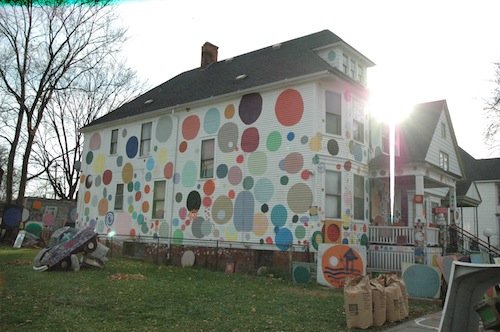 Still, other initiatives that seem to draw on the Heidelberg Projects as inspiration have popped up in recent years. These artist-led initiatives speak to the power of art to inspire hope, even when things are at their worst.

But the Heidelberg projects and some of these other projects don’t receive enough funding to properly protect them, and a rash of arsons have threatened to destroy these works of art forever. 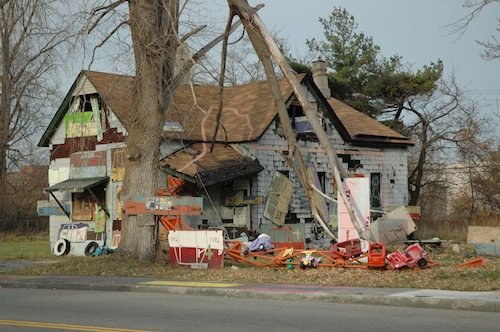 Some people think that art should be free — that artists should just do it on their own time and no public resources should be devoted to make sure they remain strong and viable in society. Minnesota is not immune to the this rhetoric, despite our Arts and Cultural Heritage Fund. Just look at the dangerous anti-art sentiment that has come out in the last year in some of the Twin Cities’ major media institutions. Detroit’s recent troubles show that unless you ensure that public dollars go to preserve the artistic and cultural quality of life, those things that make our lives richer and more colorful will go up in flames.

One of the first landmarks I noticed as I was getting a ride into the city was the Michigan Central Station, a massive building noteworthy not just for its size but for the light that shines through the empty windows. 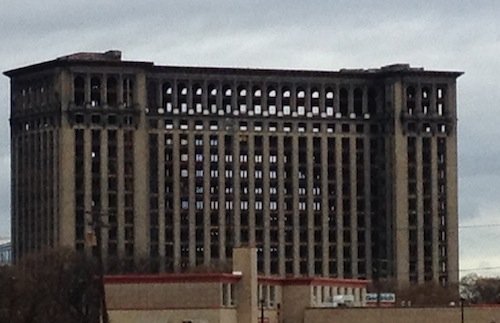 The building was built in 1913, the tallest rail station at the time, designed by the same architects who created New York’s Grand Central Terminal. In its heyday, thousands of trains would leave the station each day, and thousands of people worked in the tower. With the rise of the automobile after World War II, however, the station got less and less use. It fell into disrepair and rail services ended in 1988. The building is currently owned by the wealthy Moroun family, who apparently have been making improvements to the building such as adding a few windows, electricity and soon an elevator, but you wouldn’t know it to look at it that there are any plans beyond acting as a modern day ruin.

I was warned by several locals not to partake in ruin porn. It’s demeaning to the city, they said, and besides — why not take pictures of the good things happening in Detroit? As a journalist, this was a familiar sentiment. Any time I write a negative story, people ask me why the media never focuses on the good stories that are happening. I do understand this point of view, but here Diego Rivera can act as a guide. The Detroit murals show both the good and the bad of modern society, and in my experience of the city itself, I took note of both the wonderful people and food and art and diversity, and also clear signs of abandonment, decay and, quite frankly, years of structural racism that has isolated affluent suburbs from the heart of the city, and more recently, small pockets of gentrification in the city itself that don’t connect with more impoverished neighborhoods. This structural racism overlaps with the city’s and our whole country’s overreliance on cars, and the deep troubles car companies have experienced over the past few decades and in particular since the start of the recession. Michigan Central Station hovers over Detroit as a metaphor for the decline of the motor industry.

Like Minneapolis and cities all over the country, Detroit abandoned trains (and their siblings – streetcars) in favor of freeways and cars. Now, cities are starting to realize the folly of this and are spending millions of dollars to bring that infrastructure back. It’s none too soon. If you don’t have a car, Detroit is very difficult to get around. There’s no public transportation between the airport and the city, for example. There’s one train — called The People Mover — which just goes in a circle over a very small radius. It takes less than 20 minutes to ride the whole line, and it seems like more of an amusement park than a way to get anywhere. When it was originally built, it was intended to act as the center of a wheel, with more trains that would be built to span out into Detroit’s neighborhoods and suburbs. That never panned out because, basically, the white people in the affluent neighborhoods didn’t want the black people having a way to encroach on their turf.

Thank God Minneapolis isn’t that bad, but we’re not exactly a model public transportation city yet either. We’ve already got a couple of highly useful light rail lines, and hopefully the Central Corridor will do wonders to connect Minneapolis and St. Paul. I worry, though, about the Southwest Corridor. Will narrow mindedness and NIMBYism prevent us from ever completing that essential connection between Minneapolis and our Southwest suburbs?

Again Rivera provides us with a roadmap. Faster, better transportation has been an element of society, especially in the last two centuries, that have allowed us to “progress,” but the various means of transportation each have their own downsides, such as pollution, dwindling of resources and disparities between those who can and can’t afford it. As communities and governments look toward what will serve the greatest number of people, there will always be negatives. If we can always keep sight of the greater good, perhaps all is not lost.